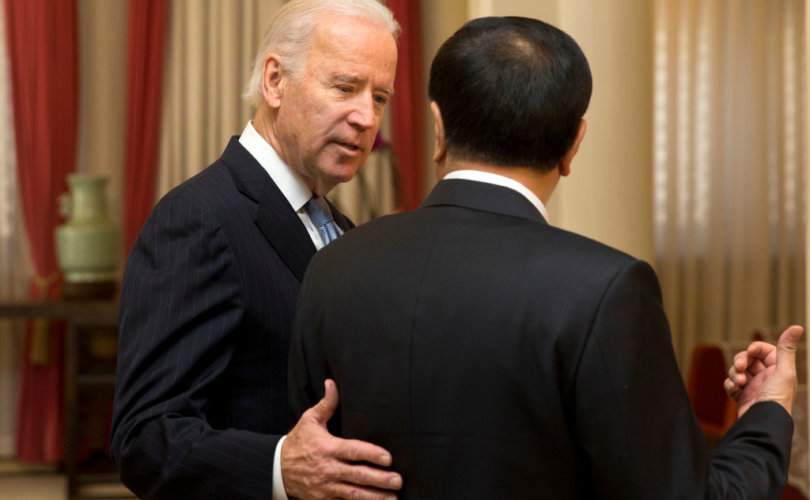 November 2, 2020 (LifeSiteNews) – Peter Schweizer has already established that everyone in Joe Biden’s immediate family was profiting from his position as vice president.  Hunter Biden’s ‘Laptop from Hell’ has revealed that his father profited from these ventures, in that he insisted that son Hunter split his profits with him.

What Tucker Carlson’s interviews with Biden’s business partner, Tony Bobulinski, prove is something more:  Joe Biden was an active participant in these various schemes.  In fact, in the Sinohawk venture that involved Bobulinski, it was clear that he actually oversaw it. In other words, “Chairman” Joe Biden called the shots in the Biden Crime Family.

Joe Biden has repeatedly declared that he knew nothing about his son’s business deals in China, Ukraine, Russia, or anywhere else.  Bobulinski insists that this is a flat-out lie, and says he has the documents to prove it.

Bobulinski is an international financier who was brought into the Sinohawk deal to help structure it.  He is speaking out, he told Tucker, because he is tired of hearing Biden lie, as the presidential candidate did during the second debate, about having no involvement with the family business.

It has not been easy for the former naval lieutenant to tell his story.  In fact, as soon as he began to speak out, he was accused of being a purveyor of “Russian disinformation.”

We all owe a debt of gratitude to Fox News for being willing to air his story for, as Tucker Carlson noted, “Never in American history have more power centers in this country aligned to kill a legitimate news story in the days before an election.” There had been “an extraordinary attempt” to prevent Fox News from even airing the Bobulinski-Biden story, he noted.

It’s a good thing for the American people that he did because we now learn that Joe Biden is the central figure in the multitude of Biden family scandals that have been playing out in recent months.  Joe’s repeated—and heated—denials that he ever spoke with Hunter about his business dealings abroad is, quite simply, a bald-faced lie.

As Tucker put it, “Joe Biden had direct personal involvement with his family’s business dealings in Communist China, and likely in other countries as well.”

Bobulinski’s involvement with the Biden’s began on Christmas Eve 2015, when he received a business proposition from James Gilliar, an English businessman:  “There will be a deal between one of the most prominent families from US and them [the Chinese side] constructed by me,” Gilliar texted.  The deal, it turned out, was between a Chinese energy company called CEFC and the Biden family, which indeed was “one of the most prominent families in the U.S.”, since it was headed by the then-Vice President of the United States, Joe Biden.

In early 2017, Bobulinski was asked by a self-described “proxy” for the Biden family, Rob Walker, to “sit down with their father [Joe Biden], just to meet him and, at a high level, discuss the Biden family and how they approached things.”

The meeting, which was arranged by Hunter, took place on 2 May 2017 in a Los Angeles bar.  Hunter explained to Bobulinski in advance that he had already briefed his father on the Sinohawk business deal, and that his—Bobulinski’s—job was simply to introduce himself and his business background.

Bobulinski recalled that “…They were sort of wining and dining me, and presenting the strength of the Biden family, to get me more engaged [in] tak[ing] on the CEO role and develop Sinohawk, both in the United States and around the world, in partnership with CEFC. There was no other reason for me to be in that bar meeting Joe Biden, than to discuss what I was doing with his family’s name in the Chinese CEFC.”

Hunter himself made it clear that his father was the head of the “family business”, a fact that was also clear from the carefully arranged meeting on Sinohawk, as well as emails and texts that went back and forth.  This was so patently obvious to Bobulinski that when Joe Biden chose to once again deny any involvement in his family’s business during the second presidential debate, which Bobulinski attended, he almost came out of his chair.

“I almost stood up and yelled “Liar!” he told Tucker.  “But I was shocked that not only is the media [still not] discussing this, but they’re going to the other extreme – they’re dismissing it as ‘Russian disinformation’…it’s just absurd.”

“The [Biden family] knew exactly what they were doing. They were dealing with a Chinese-owned enterprise run by Chairman Ye, CEFC, that had strong financial support and political support from the Chinese Communist Party…That’s not my own words; it’s how they presented it to me and read me in on it.”

Bobulinski also confirmed “how the equity from the [Sinohawk] enterprise would be divvied up,” saying that it was “crystal clear” to him that “the big guy” who was mentioned as a 10 percent shareholder was Joe Biden.  To hide “the big guy’s” share it was included with his brother’s share in the final document.

Ultimately, the head of CEFC never funded Sinohawk, but simply hired Hunter Biden—and presumably through him “the big guy” himself—directly.  In going along with this change of plan, or perhaps by even suggesting it, the Biden family effectively abandoned the very business partner, Tony Bobulinski, they had so assiduously courted just a few months before.

Of course, it’s one thing for the Biden Crime Family to cheat their business partners.  It’s something else entirely for them to jeopardize the national security of the U.S. by compromising themselves with the Chinese Communist dictatorship.

You see, the CCP knew exactly who it was dealing with, and it was not the drug-addled, sex-crazed son.  Rather, they were cutting deals with the father, who just happened to be the vice president of the United States.

What this means is that Joe Biden is fatally compromised.  Retired CIA officer Sam Faddis, who has reviewed the thousands of documents on Hunter Biden’s laptop, puts it this way:

There is a mountain of evidence that tells you that Joe Biden has been up to his eyeballs in CCP dealings.  They bought from him influence.  That means that they have “recruited” him, in spy parlance.  He works for Beijing.  You are about to have that guy sit down in the Oval Office as an agent of the Chinese Communist Party?