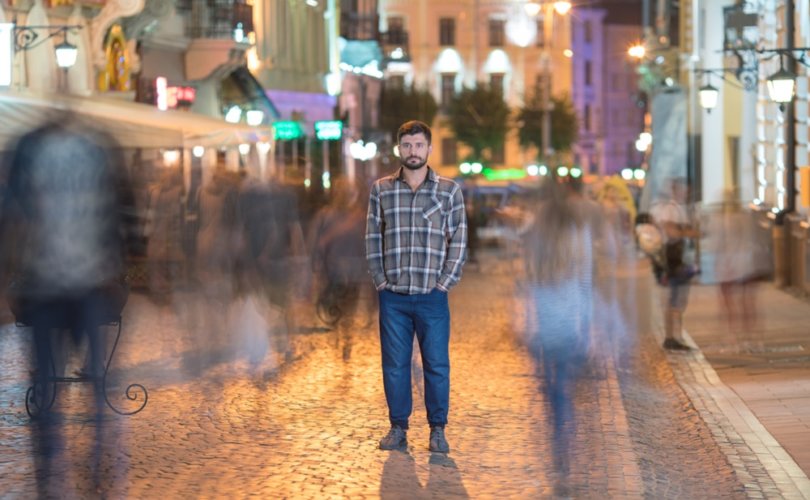 February 19, 2020 (LifeSiteNews) — For the last several days, I’ve been on university campuses in Florida with some of my colleagues from the Canadian Centre for Bio-Ethical Reform and a team of volunteers, engaging with students on abortion. At the end of each day after activism, we have a debrief after taking down the Abortion Awareness Project display and discuss the conversations we had that day. For many of the volunteers, it is their first taste of pro-life activism, and over and over again, many of them bring up one poignant question: How can people believe the things they say?

They are referring to the university students (and often their professors) who are willing to make increasingly strange and repulsive arguments to defend their morally and scientifically untenable position on abortion. Some students will insist that the child in the womb is actually a parasite rather than a son or daughter. Others will say that because the baby is dependent on her mother, she can be killed at the whim of the one who should love her the most. Many say there is a fundamental conflict of rights that exists between a mother and her children — their right to life versus her apparent right to be rid of them.

All of our volunteers have done extensive apologetics training, and so many of them had heard these arguments before. Some of them have done pro-life activism in the past. But it is something quite different to hear a young man or a young woman tell you, while looking at a photograph of a dismembered pre-born child, that this brutal violence is justified for reasons that would be vehemently rejected if applied to any other member of the human family. Many of them will even point to photos of babies in the womb and insist that one must be Christian to believe it is wrong to abort those babies, which is one of the most inadvertently compelling arguments for Christianity I have ever heard.

A thought struck me after our second day of discussing abortion with university students: ridiculous and repulsive ideas almost always deceive intellectuals before ordinary people. Most of the mental gymnastics practiced by students desperate to justify abortion resulted in truly bizarre arguments, many of which constituted an ugly utilitarianism that in practice could eliminate any and all human rights (except for the so-called right to abortion). The trans issue also surfaced, with one student hastening to add that men could, in fact, get pregnant, thus abortion was no longer solely a women’s issue.

That is another example of how academic culture creates people with the capacity to believe things that are obviously not true. An academic with two doctorates might believe that gender is fluid, but a farmer doesn’t have the luxury of entertaining such stupidity. Reality can be suspended in the queer studies department, but not in the barn or the pasture, where nature asserts itself regardless of the latest intellectual fad. (This is why the transgender ideology is a being imposed on society from the top down rather than from the bottom up. Most people know, instinctively if not intellectually, that women do not have penises. The fact that it is now considered offensive to say so out loud is a sick joke.)

The fact is that our universities often now work overtime to poison the minds of students, to detach them from their heritage, and to condition them to accept ideas that we would have once simply known were wrong, such as the idea that our offspring are parasites or that gender is fluid. Solzhenitsyn’s biographer Joseph Pearce, whom I had the privilege of interviewing on my podcast last week, described today’s definition of being “well educated” this way over at the Imaginative Conservative:

That summarizes it quite succinctly. Philosophy now serves primarily as a tool to justify the things that we must do to be selfish, free, and autonomous — although it will all lead to the desperate unhappiness we saw in the faces of so many students walking by. Many students now believe that children are a burden rather than a gift, and talking to them, I sometimes wish they could see a little girl or little boy that is their own flesh and blood giggle or coo or do something else so normal yet so beautiful that your heart almost bursts to see it and the love that surges in you is so strong that it becomes the sort of love that has built homes, communities, and civilization itself. They are being taught that they have the right to do whatever makes them happy, and then they are lied to about the source of true happiness.

And that, today, is being well educated.