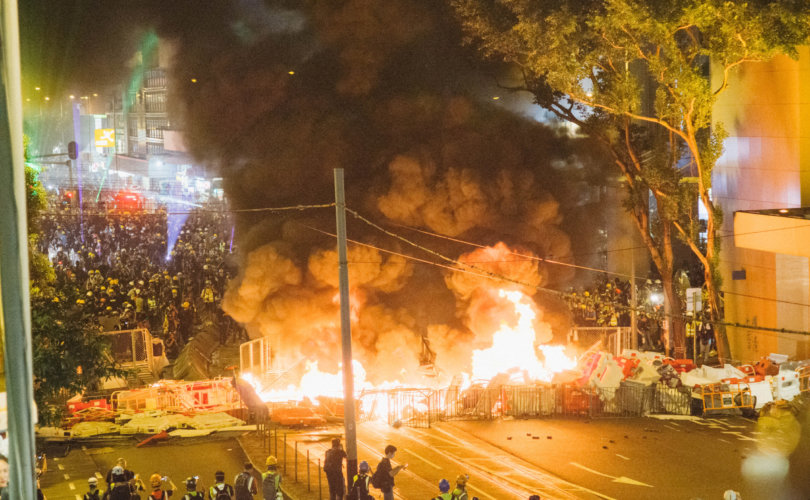 June 3, 2020 (LifeSiteNews) — “The mob should be the simplest element of humanity, because it is the deepest; it is the sub-consciousness of society,” G.K. Chesterton once wrote. “That is why it rises so rarely to the surface; and that is why, when it does rise, it is as awful as the unveiling of a god.”

The chilling truth in Chesterton’s statement is being made manifest in over thirty cities across America as looting, rioting, and violence rage night after night in response to the murder of George Floyd, who died on the pavement as a Minneapolis police officer crushed his neck with an unyielding knee. First there were protests of genuine outrage and cries for justice. Now, with the officer arrested and charged with murder, the protests have turned into something different. Heartbreaking videos of protesters begging rioters to stop smashing store windows, to stop looting, to stop destroying are circulating on Twitter — but the vandals carry on.

It is hard to believe that these scenes are unfolding on American streets. St. John’s Church across from the White House, where every president since James Madison has worshiped, was set on fire. The Lincoln Memorial was vandalized with graffiti. So was the World War II Memorial. Businesses from Philadelphia to New York City have been destroyed, robbed, and set ablaze. Some of those attempting to protect their businesses have been brutally beaten. At least 25 cities have imposed curfews and activated the National Guard, and the national death toll of the riots is rising.

George Floyd was a Christian, and he would have wanted none of this. His family and many others in the black community have already begged the rioters to stand down. But for the rioters — Antifa activists, revolutionaries, and even purportedly some white supremacists — destruction is not a means to an end. It is the point. It is the system they seek to destroy, so everything must burn. These feral gangs roaming the streets of America’s mightiest cities, pillaging while the police stand by helplessly, want a new America — one that must rise from the ashes of the one they are burning.

Many people have been posting videos featuring Dr. Martin Luther King, Jr.’s speeches calling for nonviolent resistance to injustice and condemning rioting. His aspirational words seem almost cruelly out of reach, and there is a reason for that. The America of Dr. King — one rife with racism and injustice, yes, but his America, too — still largely shared the belief that the moral principles of Christianity are true and necessary. What values could be appealed to that both a segregationist and a sharecropper might give heed to? Those of the Bible. Dr. King infused his speeches with Scripture, with spiritual songs, with calls to repentance and righteousness. He did so knowing that those who denied him his rights claimed to worship the same God.

I have had the opportunity to speak with many who lived through those turbulent times. Ruby Bridges, the first African-American child to desegregate the all-white William Frantz Elementary School in Louisiana in 1960 (famously immortalized by Norman Rockwell), told me she survived the gauntlets of screaming, angry white parents each morning on the way to school by praying for them. James Zwerg, a young university student who joined the Freedom Rides who was almost beaten to death by segregationists in Montgomery, Alabama, told me it was the Christian nature of the cause and of nonviolence that led him to join the civil rights movement. The civil rights movement was a movement organized and led out of the churches, often by pastors — and despite theological differences, they could and did appeal to their fellow Americans with the teachings of Christ and Scripture.

That common ground has now all but vanished. While there were praying protesters following the death of George Floyd, the rioters who now dominate the streets have no use for Floyd’s Christianity. There is now only joyful nihilism and the opportunism of carpetbaggers seeking to plunder while America’s social fabric tears apart on live TV. Even some of those who claim to be demanding justice for George Floyd — something we should all crave — are actually seeking much more. One of the “Guiding Principles” of the Black Lives Matter platform reads as follows: “We are committed to disrupting the Western-prescribed nuclear family structure requirement by supporting each other as extended families and ‘villages’ that collectively care for one another, and especially ‘our’ children to the degree that mothers, parents and children are comfortable.” Dr. King would recognize their rage at injustice. He did not share their vision of America.

Where does America go from here? It is impossible to say. The chaos is edging dangerously close to civil war, and the common ground of Christianity has caved into a yawning chasm, swallowing those begging for nuance, for constructive dialogue, for restraint, for reform rather than revolution. On either side of the chasm are those who shout but cannot hear each other. One side demands a radical transformation of the American republic, a new progressive experiment to replace that of the Founders. The other side often responds in anger and fear to what is perceived as a growing threat to the established order, with all of its flaws and injustices and shortcomings. America’s conscience was once a Christian one. It has disappeared, and in its void lives an unspeakably dangerous schizophrenia.