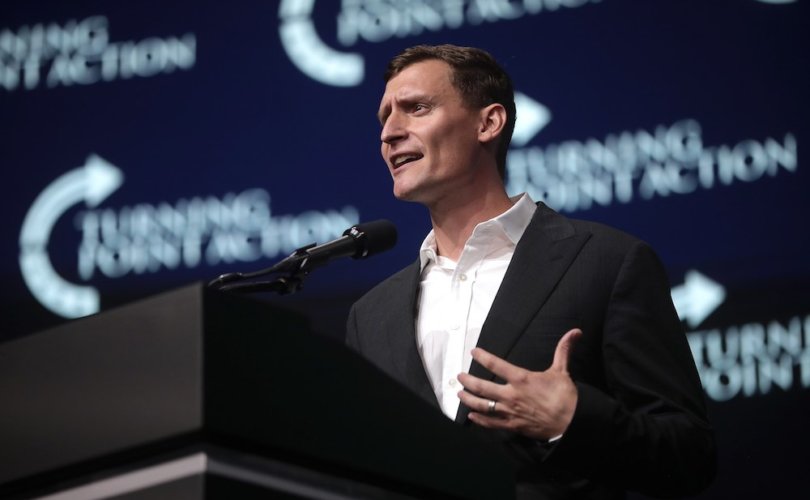 (LifeSiteNews) – Politicians wouldn’t get themselves in nearly as much trouble if they didn’t try so hard to be clever. Such is the predicament that Trump-endorsed Republican U.S. Senate candidate Blake Masters of Arizona found himself facing this week.

Prior to winning his party primary on August 2, Masters’s campaign website declared, “I am 100% pro-life” and pledged to support numerous pro-life measures if elected, including “Remov[ing] funding for any research that uses embryonic stem cells or aborted fetal remains,” and “Support[ing] a federal personhood law (ideally a Constitutional amendment) that recognizes that unborn babies are human beings that may not be killed.”

This week, however, the press noticed that his website has changed. Gone is the “100% pro-life” label, replaced with the following:

The Democrats lie about my views on abortion, because their candidate’s position is so extreme: Mark Kelly believes in nationwide abortion on-demand up until the moment of birth, with zero limits. That is truly shocking. 90% of Americans disagree with Mark Kelly’s radical position.

His list of promised pro-life actions is strikingly more modest, too. Personhood legislation and bans on unethical research are gone.

“Only China and North Korea support the extreme no-limits abortion policies that Senator Mark Kelly supports,” Masters says. “By banning extreme late-term abortion and otherwise letting states decide how to handle the issue, we would further protect life and put ourselves on par with all other civilized countries.”

This has gone over about as well as you’d expect. Our friend Lila Rose, president and founder of Live Action, excoriated Masters, while liberal media outlets like NBC News took his rewriting as vindication of the left-wing meme that boldness for life is a loser in our new post-Roe v. Wade environment.

People say politics is the art of the possible

Politics is the art of defining what is possible

We will end the killing of abortion

We will recognize every human's fundamental right to life

But we must be brave in the face of adversity

The Masters campaign is currently trying to spin the story as nothing more than “updating” his pro-life message for the post-Roe legal landscape (never mind the facts that Roe was overturned on June 24, yet the site wasn’t “updated” until sometime between August 23 and August 25, or that restoring states’ option to ban abortion in no way eliminates the need for federal personhood protection).

Blake Masters is proudly pro life. His site was updated in light of the Dobbs decision — which he heralded as a huge victory — and continues to make clear that he's pro life, opposed to federal funding for abortions, and wants a federal ban on late term & partial birth abortion. https://t.co/TkDDCRHnUj

Sad to see, but the National Review's girlboss hire fell for it! My advice for brilliant and empowered up and coming young female reporters? Maybe conduct an iota of research before you randomly attack the best chance we have at saving innocent human life.

Incredibly, instead of simply noting that Masters is still vastly preferable to the 100% pro-abortion incumbent, Susan B. Anthony Pro-Life America has opted to assist the Masters campaign with damage control. The group issued a statement by president Marjorie Dannenfelser claiming Masters has done nothing more than “rightfully centered his position on what is achievable now at the federal level: a limit on abortions at a point by which the unborn child can feel excruciating pain.”

Let’s not insult anyone’s intelligence any further: this wasn’t about legal analysis or legislative focus. Masters wanted to look tough on abortion for conservative primary voters, then changed his tune to sound more moderate for the general election audience. In the process, he gave ammunition to those naysaying other pro-lifers currently working toward more comprehensive protections.

Most people in politics understand the necessity of emphasizing different issues for different audiences, especially in statewide races that sometimes require appealing to people who aren’t yet willing to go as far as every issue needs to be taken. But that’s not what Masters did. He chose to make promises to one group of voters only to erase them when the time came to appeal to someone else – in the process calling more attention to the positions he feared being tied to, and giving voters of all abortion views a new reason to distrust him.

All in hopes of preventing Democrats from saying things about him they were going to say no matter what his position was.

Naturally, this whole affair has left a bad taste with principled pro-lifers in and out of Arizona. But it has also inspired calls, chiefly from Alexandra DeSanctis Marr and Kevin Williamson of National Review, for pro-lifers to abandon support for Masters.

A publication whose motives and biases have been suspect ever since it helped legitimize the #NeverTrump movement, NR is no stranger to advocating expediency over principle when it comes to abortion, making Marr and Williamson’s stances especially ironic. But regardless of what’s driving these latest calls, they veer off course in the opposite direction of Masters’s apologists, proving they learned nothing from the Trump years.

It’s obvious we shouldn’t expect the exceptional if Masters wins. But it’s equally obvious he will vote very differently from Kelly. And given the existential threat posed by our totalitarian Democrat overlords – who want to force acceptance of abortion-on-demand and same-sex “marriage” on the entire country, physically and mentally mutilate troubled children, run roughshod over speech and gun rights, and force medical decisions on Americans at the cost of ruined livelihoods; and are already devastating our armed forces, calling parents terrorists, and perpetuating mass suffering at home, abroad, and in between – we need to take every opportunity we can to deny them the power to turn their wildest dreams into national nightmares.

To put things in perspective, simply recall that these people would have ended free elections in America within weeks of taking over the White House, if only they had a few more Senate votes.

It’s natural to wish we didn’t have to rely on feckless phonies for national survival. It’s also understandable to want to focus on winning an election instead of harping on those phonies’ blunders. But neither impulse can solve the problem on its own. Only by honestly assessing situations as they happen, doing our best for the immediate problem with the tools available to us, and then channeling our frustration into better preparation and decision-making for the next round of primaries do we stand a chance of turning things around.