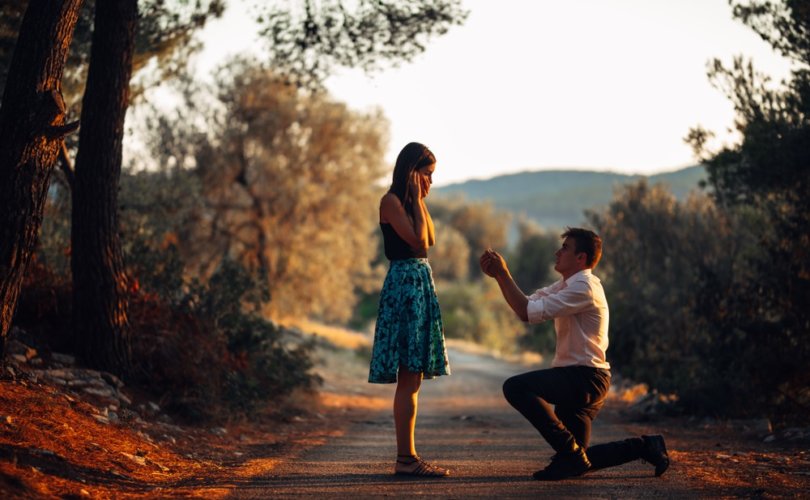 June 9, 2020 (LifeSiteNews) — Each year, the summer is the season of (most) weddings. This year, celebrations of marriage may have a very different appearance from what they would have had pre-coronavirus. Nevertheless, as long as time goes on, with or without plagues, Christians will be throwing their lots together for life and endeavor to imitate the fruitful and indissoluble union of Christ and the Church.

The Catholic Church’s “Common Doctor” or universal theologian, St. Thomas Aquinas, has many beautiful things to say about marriage, which deserve to be better known as guiding principles in marriage preparation, catechesis, preaching, and ongoing education.

The greater the friendship, the more stable and lasting is it. Now, between a man and his wife there seems to be the greatest friendship; for they are made one not only in the act of fleshly intercourse, which even among beasts causes an agreeable fellowship, but also as partners in the whole of domestic life (ad totius domesticae conversationis consortium). (SCG III.123)

The friendship spoken of here is a friendship of virtue, premised on the most proper human goods and a sharing in the totality of the life of the household — not a mere friendship of pleasure or of utility, which would reduce the other’s value to gratification or benefit. As Aristotle explains, a friendship of virtue does contain pleasure and utility, but it essentially goes beyond them by taking in the value of the person for his own sake, as one for whom we will the possession of the good — indeed, the greatest good.

Regarding the act of fleshly intercourse, St. Thomas comments, on Hebrews 13:4, “Let marriage be held in honor among all, and let the marriage bed be undefiled”:

Contrary to [the opinion of] certain heretics, this verse shows that the marital act can exist without sin. “If a virgin marries, she does not sin” (1 Cor. 7:28). Hence, the Lord, in order to show that the marital act is good, worked His first sign during a wedding and ennobled marriage by His bodily presence there, and, moreover, willed to be born of a married woman. (Super Hebr. 13, lec. 1; Marietti ed., n. 732.)

Finally, marriage supplies new members for the Church, the populum fidelium or fidelium collectio, even as it replenishes and expands the human race. On the natural plane, marriage is given “as a remedy … against the decrease in numbers that results from death,” while on the supernatural plane, it has the privilege of “bringing into being the recipients who approach the sacraments” (ST III, q. 65, a. 1, corp. and ad 3). SCG IV, ch. 78:

Since the people of the faithful (populum fidelium) were to be perpetuated even to the end of the world, it was necessary that this be done by generation, through which also the human race is perpetuated. … Now human generation is ordered to several ends: the continuation of the species; the securing of some political good, such as the preservation of the people in some civic body; it is, moreover, ordered to the perpetuity of the Church, which consists in the assembly of the faithful (fidelium collectione).

The sacrament obliges and equips husband and wife to bring back to God, through Christ and his Church, the gift of children they receive from God. “The foremost good of marriage is offspring brought up for the worship of God (proles ad cultum Dei educanda)” (In IV Sent. d. 39, q. 1, a. 1). The married, in a way properly theirs, help build up the human race into the body of Christ, the true goal of humanity.

What is most special about Christian marriage is its unique and proper signification: “since wedlock (conjugium) is a sacrament, it is a sacred sign, and of a sacred thing” [2] — namely, “the mystery of the conjoining of Christ and the Church,” “which is made in the freedom of love (secundum libertatem amoris).” So important is marriage’s sign value that Thomas can say: “In every way, ‘sacrament’ is the foremost of the three goods of marriage, for it pertains to marriage insofar as it is a sacrament of grace, whereas the other two [goods, viz., offspring and fidelity] pertain to it insofar as it is an office of nature — and the perfection of grace is nobler than the perfection of nature” (In IV Sent. d. 31, q. 1, a. 3. In IV Sent. d. 31, q. 1, a. 3, sc 2).

As Marc Cardinal Ouellet explains in his book Divine Likeness: Toward a Trinitarian Anthropology of the Family (Eerdmans, 2006), St. Thomas sees the sacramentality of marriage as a perfection that God introduces from without, so to speak, rather than something that wells up immanently from human nature, the way offspring and fidelity do. Thus, to the question “What is most essential to marriage?,” there must be two answers: one from the vantage of its natural function, namely to promote the human race by “increasing and multiplying,” and the other from the vantage of its supernatural function, which emanates from and concerns itself with the nuptial union of Christ and the Church.

Nevertheless, St. Thomas says that if by “offspring” or “fidelity” one means not the thing itself but the intention thereof — the intention to have a family and the intention to remain faithful — then either of these is more essential to marriage than sacramentality, inasmuch as the nature of a thing precedes its elevation by grace. If there is no man, there is no saint; so too, if there is no permanent sexual relationship ordered to offspring, there is no indissoluble grace-giving bond (see In IV Sent. d. 33, q. 1, a. 1). That is the basic reason why there can be no such thing as “gay marriage,” nor a marriage between man and woman if either of the parties refuses, in principle, to be open to children.

While more recent authors on marriage write many more words, often enthusiastic and poetic in tone, they seldom express truths as profound and fruitful as those we can find in the writings of the Angelic Doctor. He provides us with those mustard seeds of understanding that can mature into mighty trees.

[1] See In IV Sent. d. 26, q. 2, a. 3, ad 2. Formally speaking, marriage confers a specific power “for bodily acts” — namely, those ordered to the suitable and dignified procreation of children, which includes the power to bring them up well. This is why marriage does not confer a character, which is always ordered to “spiritual acts” (see In IV Sent. d. 31, q. 1, a. 3, ad 5), as can be seen in the sacraments that do confer it — baptism, confirmation, and holy orders. Put differently, since character is a metaphysical participation in the high priesthood of Jesus Christ, only those sacraments confer a character that confer the ability to share in the very activity of Christ, and marriage equips earthly spouses to do something other than what Christ Himself actually does (although obviously not anything inherently incompatible with what he does). Some Thomists speak of a “quasi-character” conferred by Christian matrimony.