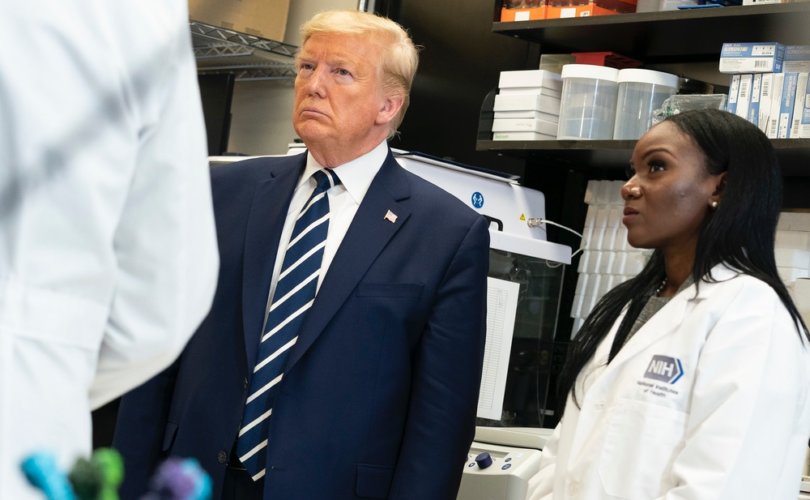 March 5, 2020 (LifeSiteNews) – What’s the likely origin of the Coronavirus? Let’s start by following the bread crumbs:

These facts led me to conclude that the most likely explanation for the origin of the Chinese coronavirus was the Wuhan Institute of Virology. “Don’t buy China’s story about a seafood market,” I wrote in the New York Post. “The coronavirus may have leaked from a lab.”

The article was read millions of times, shared on Facebook hundreds of thousands of times, and led to appearances on Tucker Carlson and other shows.

But it also led to vicious attacks from the Left on me personally.  As we all have been recently reminded by Bernie Sanders’ love affair with Cuba, many Leftists instinctively defend Communist regimes.  So I quite naturally thought that my “crime” was suggesting that the coronavirus pandemic may be the Chinese Communist Party’s fault.

But then I realized that most of my most vociferous critics were Democrat political operatives.  Take Judd Legum, for example, who launched a Twitter storm against me.  Mr. Legum just happens to have been the research director for Hillary Clinton’s failed run for the presidency.

“This New York Post column is one of the most widely shared pieces about the coronavirus,” Legum tweeted out.  “It has been promoted by a US Senator. And it's complete quackery. The author, Steven Mosher, has no medical expertise. He is the president of the Population Research Institute, an organization that opposes abortion AND contraception: ‘Contraception facilitates the kind of relationship…and moral character… likely to lead to abortion.’ “

(As it happens, I have an advanced degree in the Biological Sciences. While at Stanford, I helped teach a course called “Human Biology,” and worked on a genetics project with Stanford geneticist Luigi Cavalli-Szorza.  I have since published a number of articles in medical journals.  But my chief qualification to evaluate the origin of the coronavirus is my understanding of the policies and practices of the Chinese Communist Party, which I have studied for most of my adult life.  As far as attacking me on contraception, anyone who doesn’t believe that contraception leads to abortion hasn’t lived through the past half century.)

“Experts who have examined the genome sequence of the coronavirus say it is completely inconsistent with a bioweapon,” wrote Legum.  “This is a fantasy invented by Mosher. But that didn't stop his piece from being shared by a U.S. Senator. Mosher's column was then aggregated by popular right-wing sites like The Daily Wire, which described it as “reporting” even though it contains absolutely no reporting! It's just a bunch of disparate facts strung together to support a conspiracy.”

(The evidence suggests that it escaped from the Wuhan Institute of Virology, which is one of two such biolabs known to be working on genetically engineering bioweapons. Way back in 2007-8, China's Ministry of Science and Technology was already funding research at the WIV that could be used to create a coronavirus harmful to humans. Read paragraph 4 of this article from 2008 published in the Journal of Virology by the Chinese scientists involved.)

Legum’s real purpose, however, is not so much to defend China as to attack Trump.  This comes through loud and clear in his final Tweet:

“Instead of tamping down this conspiracy theory,” Legum writes, “the Trump administration is fanning the flames. Ken Cuccinelli acknowledged there was no evidence to support the conspiracy theory but refused to “rule out” anything. Right now, the world needs accurate information to SAVE LIVES. Instead, we get conspiracy theories by right-wing ideologues, amplified by GOP politicians, social media companies, and Fox.”

Now, Judd Legum is a Democrat political operative who, like all such operatives, is constantly looking to score cheap political points against the President.  Their latest scam is to promote the completely false idea that the coronavirus epidemic is all Trump’s fault.  The Russia hoax has now morphed into the coronavirus hoax—the hysterical hyping of a flu epidemic–which they hope will help ensure his defeat in November.

My real crime, in their eyes, is that  I Got in the Way of An Attack on Trump. That’s why I was subjected to the kind of irrational, hate-filled attack that the President puts up with every single day.

By putting the blame for the epidemic where it belongs–on the Chinese Communist Party–I stepped on the political narrative that Democrat operatives are trying to promote.  I jeopardized their future job prospects with a Biden or Sanders administration.  I offended their delicate “democratic socialist” sensibilities where “socialist” China is concerned.

Of course they are mad at me.  I was blaming China.  They want everyone to blame Trump.

The truth is that the President quickly shut down flights from China to the U.S., set up a task force headed by the Vice-President to deal with this new strain of the flu, and has unleashed the greatest innovation economy the world has ever seen to find treatments and a vaccine.

The U.S. is quite simply the safest place in the world to be right now.  Americans need to calm down and ignore the efforts of some to sow panic.  This is a viral flu, not the Black Death.

Steve Mosher is the President of the Population Research Institute and the author of Bully of Asia: Why China’s Dream is the New Threat to World Order.  He is following the coronavirus outbreak on Twitter @StevenWMosher