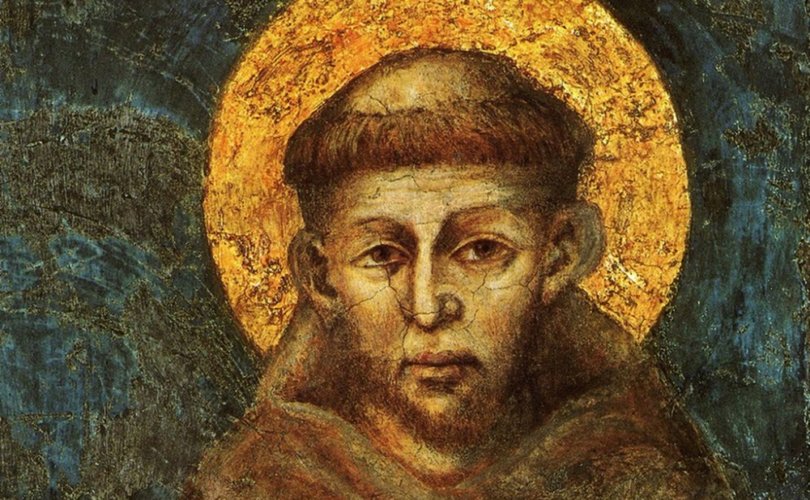 September 18, 2018 (LifeSiteNews) – On the calendar of the traditional Roman Rite, September 17 is the feast of the Impressing of the Stigmata on St. Francis. On Mount Alvernia, September 14, 1224, Francis experienced a mystical vision of a figure that looked like a crucified seraph, from whose wounds came forth a light that pierced his own hands, feet, and side. It was an event and a mystery that profoundly impressed itself on the minds and hearts of all of his contemporaries; one might say that it, too, burned its way into the collective memory of the Church, which hails Francis as the first one favored with the special grace of the stigmata.

This feast prompts us to remember the miraculous conformity of Francis to his crucified Lord, which had already occurred within his Eucharistic, poverty-loving, Gospel-zealous heart, but which would from then on appear outwardly in his very flesh, making him a living icon of the Savior he served. In this sense, St. Francis himself is one of God’s greatest works of art, and we might just leave it at that.

However, the visual arts and musical arts were quick to celebrate the life, death, gifts, beatitudes, and virtues of the troubadour of God. All over Europe, Franciscan friars, sisters, and tertiaries composed music and executed paintings in his honor and in exaltation of the ideals of the Franciscan order, which, unlike more recent fantasies that festoon the poor saint with a veritable Disney-chain of wild animals, were actually focused on the veneration and penitential embrace of the life-giving Cross, the worship of the Most Holy Eucharist, the chivalrous honoring of the Blessed Virgin Mary, and the succor of the diseased and rejected.

As with 13th-century Italian architecture and sculpture, so it was with painting: the stylistic influences are more numerous, yielding results different from elsewhere in Europe. Italy’s ties to the Greco-Roman past and its heavy Byzantine heritage (both historical and contemporaneous) drove its artists, on the one hand, to emulate naturalistic and monumental work from the classical period, and on the other hand to work in the Byzantine iconographic style. The short-lived occupation of Constantinople (1204–1261) brought about a new infusion of Byzantine artists and art forms into Italy. The starting point for the ascendency of Italian painting in the period from 1200 to 1550 was called “the Greek manner.”

In this world was born the artist simply known as Cimabue (c. 1240–1302), whom Giorgio Vasari, a later art historical tale collector, claimed was an apprentice to a Greek painter, before he became, in turn, the teacher of Giotto, although this point is disputed. Cimabue’s work may be found in Assisi, Rome, and Pisa, as well as in Florence, his home. It is striking to think that Cimabue was born only about 14 years after the death of St. Francis, which meant he would have been rubbing shoulders with many people who remembered the saint, especially as the great basilica in Assisi was being constructed and decorated under the guidance of the Franciscans.

One of the most lovely of Cimabue’s paintings is found in the transept of the lower basilica of San Francesco—a fresco named, not without accuracy, Madonna with Child Enthroned, Four Angels and St Francis. Unfortunately, like so many other artworks of the Italian Gothic period, this one has suffered some damage over the centuries, and attempts to repair it have not always achieved happy results.

Nevertheless, the fresco contains much to admire, from the tender, placid expression on the Virgin’s face, to the almond-eyed angels with aquiline particolored wings grouped in perfect symmetry around the very Byzantine-looking throne of the Mother and Child. But what excites our admiration the most is the exquisite St. Francis standing off to the right side, in keeping with his humility as one who never wanted to be the center of attention (though he often unavoidably was). If we look more closely at this portion of the fresco, we see how beautifully Cimabue has rendered the stigmatist.

His eyes are full of understanding, compassion, and silence. Here is one who has learned to watch, wait, and then act as prompted by the Spirit, rather than acting rashly by his own lights and regretting the mess he would have made. His ears and nose, in iconographic style, are exaggerated to show how attentively he is listening for the voice of God, and how he discerns the fragrance of Christ, the good odor of sanctity.

His tonsure and the golden halo complement one another, as if to say that it is through his religious vows, his abnegation of self and renunciation of the world, that he has attained the lofty heights of holiness. We cannot help noticing the splendid complementarity of shapes and colors that makes of this composition a tranquil yet lively image of a man whose interior life was both passionate and orderly.

The lips are full and ready to speak the Word of God—the selfsame Word he holds protectively and lovingly in his hands in the form of a lectionary. As a deacon, Francis considered it one of his greatest privileges to chant the Holy Gospel, and was so devoted to the inspired text that he upbraided anyone whom he caught treating lectionaries or bibles poorly.

The nail-marks in his hands (and in his feet, for that matter, in the full fresco) are clearly visible, while his torn habit (a common enough sight) reveals the larger wound in the side. Francis was initially disturbed and perplexed about the stigmata, as he did not want anyone to know about them, for fear of vanity or pride. It was his own follower Brother Illuminato who, as the Fioretti narrate, persuaded him that God impressed these marks upon him as a sign and a message to others, to stir them up to a more intense faith in Christ and a more ardent love of Him. The saint’s calm countenance shows that he has accepted the mysterious workings of God. He has himself become, in a unique way, alter Christus, “another Christ.”