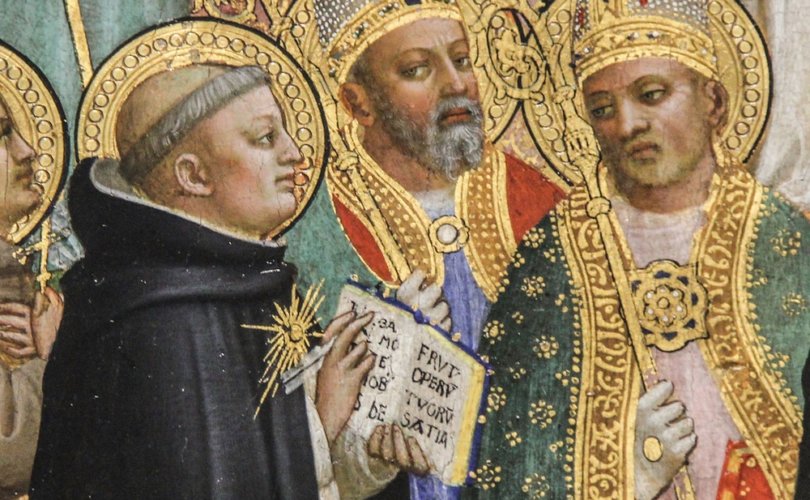 September 19, 2019 (LifeSiteNews) – Earlier this week, I spoke of Aquinas’s “mystical theism” as a summit of graced human intellectual activity compared with the swamps of Cartesian and Heideggerian atheism—premised as they are on a fruitless quest for foundations when classical metaphysics and divine revelation have been laid aside as outdated.

Part of the difficulty with the so-called “new atheists,” as many of their critics have recognized, is that they have an exceedingly poor conception of what is even meant by the word “God.” This, no doubt, is due to a process of conceptual degradation that has afflicted believers as well as unbelievers, like the slow devaluation of a currency. The atheist turns God into an idol, like the wooden statues of the pagans, and then smashes it to bits and congratulates himself on a job well done. We might agree that his work would be valuable among pagans, but it does nothing to the God of Christians, who cannot be smashed to bits.

“God” is not just a more powerful version of His creatures, a “super-power” that is, at least in theory, a competitor for the same explanatory turf. He is not like a man but a million times stronger or smarter or subtler. He is not one being among many, such that you could count Him: “We have four lightbulbs, three potatoes, two cars, and one God.” As St. Thomas explains, God is beyond all beings that we can name and number: He is ipsum esse per se subsistens: Being itself, existing in and of itself, unlimited in any way, absolutely one (having no before or after, no parts making up a whole), the source of the being, life, and activity of everything else without being conditioned or determined by it, present everywhere but confined by nothing. He is pure and simple being (where be-ing is taken as a verb, an activity)—not like the light or heat of the sun, but like Light and Heat. This means that no perfection is lacking to Him, nothing is partial in Him; He is not just all good, or the best good, but goodness itself. Everything that is “in” God (i.e., that we can truly say about Him) is God; that is why we can say God is love, God is wisdom, God is mercy, God is justice, and yet there are not as many gods as there are attributes, but one God who, as Being itself, is all perfections at once, in His eternal now.

Is it difficult for us to conceive of God? Yes, of course it is. Our minds, as the minds of rational animals, are not properly adjusted for understanding something, or rather someone, who is “off the charts” of all the data that we encounter through our senses. Our ideas all originate with our experience of this material world, so everything we say about God is based either on reason knowing there must be a first principle and then systematically negating the limitations we find in beings (with a small ‘b’), or on divine revelation telling us who, what, and how God is. As Dionysius the Areopagite says, God uses every possible description of Himself in Scripture—comparing Himself to weather phenomena, rocks and minerals, plants, birds, mammals, men, cherubim and seraphim—in order that we will not be tricked into identifying Him with any of them, or even with the best of them. He is all that they are, but indescribably beyond it; they tell us something about Him, but only a hint or a peek, more or less depending on the comparison (because, indeed, some creatures are nobler than others). God, in short, tells us to avoid the mistake of the new atheists.

Then there are other difficulties, such as the attempt, in interreligious dialogue, to speak of a “God” who is neither Yahweh, nor Allah, nor the Holy Trinity, but just a “supreme being” whom various religions can agree to call God. The problem is, this God has been depersonalized, robbed of the richness of His identity, turned into the object of no tradition’s prayers. It is a God of, and from, nowhere.

St. Thomas was not, nor can any Christian be, a “theist” in such a reductive or minimalist sense. There is no such thing as the “supreme being” of the Enlightenment Deists—a “god” without personal identity; there is the one and only God who is Father, Son, and Holy Spirit, the Most Holy Trinity. Even as there cannot be a “God without being” (Jean-Luc Marion’s now-retracted Dieu sans l’être), so there cannot be a God apart from the Trinity of Persons. This is why Christians and Muslims do not worship the same God with the same act of worship, pace the fuzzy logic of Nostra Aetate and the Abu Dhabi declaration.

Moreover, this God is not distant, but present in and to everything, most intimately and inescapably and lovingly. He is near to all who call upon Him, and makes His dwelling in souls that receive Him—that become temples of the Father, the Son, and the Holy Spirit. No divine Person enters without the others, for they are, in truth, simply and absolutely, the one God who is Being itself. The distinction of Persons in Him is not a distinction in essence or in existence, but a distinction within God’s essence and existence.

The foregoing account is not meant to deny the possibility of belief in an all-perfect Being whom men worship as God yet not as Trinity—so long as the absence of Trinitarian faith is the result of invincible ignorance, not of explicit repudiation; nor is it to deny the abstract commonness of the object of this belief among all who worship it. What it does deny is the illusion of the so-called “perennialist” school—represented by such thinkers as René Guénon (1886–1951), Frithjof Schuon (1907–1998), and Titus Burckhardt (1908–1984)—for whom the diversity of religious traditions masks a transcendent unity of religion, as well as the error of positing a God-willed harmony between opposed religions and their adherents, a harmony perhaps unachievable in this world due to the human nearsightedness and dogmatic attachments, but already actualized in the mind of God. This error may well be the underlying premise of the Abu Dhabi declaration.

In reality, as Christians know and have always known, there is moral and dogmatic dissonance between believer and unbeliever, with the corresponding danger of the unbeliever’s damnation; and only these facts can justify Christ’s exceptionless missionary mandate.

Every age, every culture fashions forms of belief in God that share little or nothing in common with true religion. In comparison with those who worship the gods of the marketplace or the clan, he who worships the true God might end up appearing an atheist to the conventionally-minded. Socrates worshiped the true God in spite of the pseudo-religion of his city and was put to death as an atheist. The early Christians worshiped a God who canceled out the Roman pantheon, and were martyred as atheists. The God whom Christians worship is a God whose divine Word has emptied Himself in human nature, stooping to such abasement and misery that He could cry out: “My God, my God, why hast Thou forsaken me?”—not as if questioning His perfect unity with His Father, but as crying out, over all time and space, the breadth and length, height and depth of His charity for sinners (Eph. 3:18–19), His identification with their condition of lack, need, and desire, which goes to extremes unthinkable, absurd, in the eyes of man.

As G. K. Chesterton put it in his masterpiece Orthodoxy, with his usual flair for hyperbole:

When the world shook and the sun was wiped out of heaven, it was not at the crucifixion, but at the cry from the cross: the cry which confessed that God was forsaken of God. And now let the revolutionists choose a creed from all the creeds and a god from all the gods of the world, carefully weighing all the gods of inevitable recurrence and of unalterable power. They will not find another god who has himself been in revolt. Nay, (the matter grows too difficult for human speech,) but let the atheists themselves choose a god. They will find only one divinity who ever uttered their isolation; only one religion in which God seemed for an instant to be an atheist.

In this life of exile, self-effacing adoration is the most fitting response man can make to a love so far beyond us.