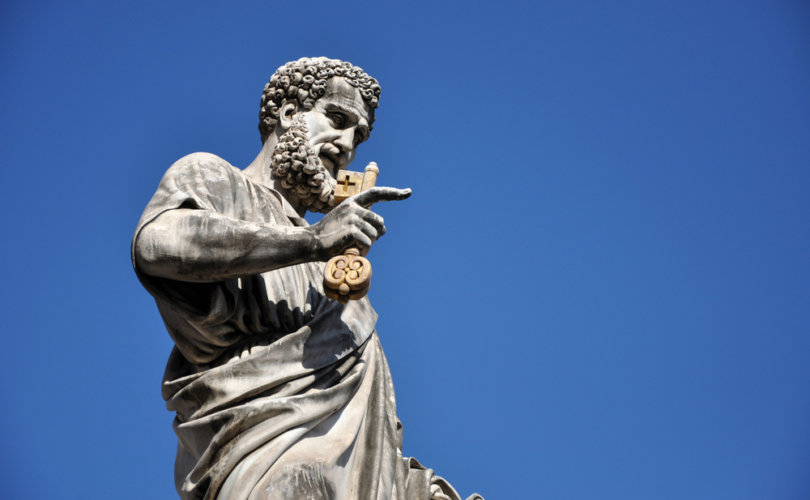 Statue of Saint Peter holding a key in Vatican city.Shutterstock.com

September 27, 2019 (LifeSiteNews) – Around the time of the letter accusing Pope Francis of heresy, I published an article at OnePeterFive titled “When Creeping Normalcy Bias Protects a Chaotic Pope.” A reader wrote a letter to me that, I am sure, will resonate with many Catholics who are looking at the darkening situation and wondering: “How can it be happening that the pope is deviating from the Faith? Where am I to turn for guidance, if not the successor of St. Peter? Are Christ’s promises crumbling? Is it hopeless?” Here is the reader’s letter:

At the end of your most [recent] article published on May 8th, you quote a friend commenting on the Church’s current crisis of truth and the final trial resulting in “washing away the petrified filth of vice and error and restoring [the Church] to her lost beauty.” You then encourage your readers to “hold fast to the Catholic faith and pray more fervently than ever.” My question is this: What do you mean by “the Catholic faith”? What does it translate into? People in the hierarchy as well as teachers, etc., mean very different things by this phrase. I’m even more concerned because you earlier state in the article “But to think the current crisis of Pope Francis can be contained by means of a few pat ‘Catholic Answers’ is like trying to extinguish the flames of Notre Dame with a squirt gun.” While I don’t disagree, this statement places me on a more uncertain foundation. What does it mean to hold fast to the Faith especially if “pat” Catholic answers are entirely insufficient? I work in a parish and try to pass on the Faith. Thanks for your efforts to let the truth shine forth.

I share my reply for the benefit of others who may find themselves in the same mental anguish and impasse.

Yes, this is the burning question of our time: What is the Catholic Faith? Is it simply infinitely malleable in the hands of popes, councils, theologians? Or is there some way we can know with rock-solid certainty that we are holding to “the faith delivered once for all to the saints,” as the Letter of Jude puts it?

The main thing I’ve noticed in my life is that a vast number of people have little or no knowledge of the Faith deeper than Vatican II; they pay attention to only what has happened or been said in the past fifty years. Ratzinger frequently criticized this move as making Vatican II into a “Super-Council” that trumped everything before, as if the Church were born in the mid-1960s. In reality, the Faith is immeasurably vast and deep, and has 2,000 years of tradition behind it and within it—more like 4,000 years, if you include Israel. This is the basic reason I’m a traditionalist: not because I want to “go back” to a particular time in history, but simply because I desire to embrace the sum-total of all of that history, which is our birthright. I want to live from the totality, the fullness, the whole, not from fragments, shells, and scraps. The tradition has time-tested strength, solidity, resilience, coherence, subtlety, breadth; the new version, “catholicism lite,” has an abysmal record of fragility, porousness, flimsiness, incoherence, brazenness, and narrowness.

More concretely: dozens of popes, an impressive sequence from the 13th century to nearly the present, have recommended the study of St. Thomas Aquinas. He is an absolutely safe guide in philosophy and theology, needing to be corrected for error in only a tiny handful of cases. Extrapolating, this means that Thomists like Frank Sheed, Josef Pieper, and Fulton Sheen will also be safe guides. (See here and here for more recommendations.)

Again, catechisms—which by definition are designed to transmit the orthodox Faith in the simplest, clearest, most reliable manner—were not born with the Catechism of the Catholic Church. There were hundreds of catechisms before it, all published with the approval of bishops; these may be seen as a collective witness to the universal ordinary magisterium of the Church, which is infallible. The most authoritative of these was the Catechism of the Council of Trent, promulgated by Pope St. Pius V.  Pope St. Pius X also published his own catechism. These two make for excellent resources on a catechetical level, as in: what do Catholics actually believe? All catechisms before now concurred with one another, whereas our current CCC, as modified by Francis on the death penalty, stands outside of this consensus. It is for reasons like this that I oppose Francis’s errors: one does not simply cancel out the agreement of hundreds of catechisms spanning a 500-year period. It is for similar reasons that I object to the liturgical reform: it likewise canceled out centuries of organic liturgical development.

Like Christ, their Master, the premodern popes “teach with authority”: you can see it in the clarity of their arguments, the unanimity of their conclusions, and the force of their proofs from Scripture and Tradition. I became Catholic, in a sense, by reading the encyclicals of Leo XIII, Pius X, Pius XI, and Pius XII. Once you cut your teeth on stuff like this, many later documents look mushy, verbose, confused, and afraid to say the truth. Not that they are positively false, but they become, in a way, uncertain of themselves. And this, in a nutshell, is the problem: the loss of the conviction of the truth and the evangelical missionary zeal that follows from it. We are in full meltdown because we have let go of the non-negotiable primacy of truth, the love for immortal souls and their salvation, and zeal for Christ the King and His Kingdom.

I think we can be quite confident that Our Lord does not want His Church to go into a period of self-doubt, self-denial, and self-psychoanalysis. This is an unhealthy introspection, a turning-inward that leaves us constantly second-guessing ourselves. We ask for bread and we seem to be getting stones, or maybe particolored pebbles. But the bread is there in the pantry of Catholic Tradition; it’s there for the taking. Our Lord stocked it well, and gave it the miraculous property of never running out.

Cordially yours in Christ,