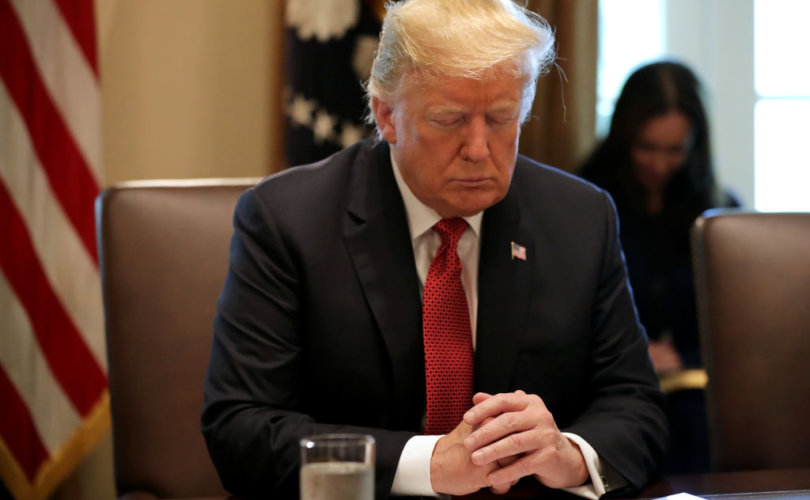 June 1, 2020 (LifeSiteNews) – On Friday, President Donald Trump gave a nine-minute speech on U.S.-China policy that will change the world forever. It did not receive the attention it deserved in America, given the ongoing rioting in major U.S. cities. But I am sure that it was heard loud and clear in Beijing.

Trump began by announcing that he would be “terminating our relationship with the WHO” because it had failed America and the world by conspiring with China to cover up the “Wuhan Virus.”

I am sure that the vast majority of Americans would agree that we should not be funding a so-called “health” organization whose actions contributed to the death of tens of thousands of Americans.

Trump had earlier given the head of WHO, Tedros Ghebreyesus, fair warning, telling him on April 14 that he was cutting off funding until major changes were made at the organization.  When Tedros did nothing, Trump acted.

You should always take this President at his word.

Even more momentous was his decision to condemn the Chinese Communist Party’s (CCP) decision to tear up its treaty with Great Britain and rule Hong Kong directly. “China has replaced its promised formula of ‘one country, two systems’ with ‘one country, one system,’ Trump said, adding that it was “absolutely smothering Hong Kong’s freedom.”

I would say that the result of the CCP’s takeover of Hong Kong is better described as “one country, one tyranny,” but that is just a quibble.

The Communists have unilaterally decided to make fundamental changes to Hong Kong’s Basic Law, imposing a new National Security Law that would “prohibit any activity (in Hong Kong) that would seriously endanger national security.”

This action reduces the Legislative Council of Hong Kong, which was supposed to operate with a “high degree of autonomy,” to nothing more than a rubber-stamp parliament. For ordinary Hong Kongers, it means that China’s feared secret police will move into Hong Kong and arrest anyone who criticizes the Party and its leaders.

Some say the Communists won’t overreach in Hong Kong because that would ultimately hurt China itself. But I would have them call to mind Aesop’s fable about the scorpion and the frog. The frog offered to carry the scorpion across the river if the scorpion promised not to sting it. Halfway across the river, the scorpion stung it anyway, explaining to the dying frog that it couldn’t help itself because this was its very nature.

Communists, too, just can’t help repressing and tyrannizing — it’s in their very nature. If the Chinese Communist Party is allowed to crush freedom in one place, it will be emboldened to threaten it in another, just as the Nazis were emboldened by their seizure of Czechoslovakia’s Sudetenland.

Trump understands this, and declared that he would be revoking Hong Kong’s special status under U.S. law. The city will henceforth be treated the same as the rest of China for travel, customs, and trade purposes. The same tariffs that have been imposed on China will be imposed as well on Hong Kong. He also promised to sanction Communist officials who are directing the crackdown there.

There are a number of other actions that the Committee on the Present Danger China, of which I am a member, are recommending that the President take in the days to come.

As we wrote last week, “The Party’s so-called ‘Great Firewall’ is an instrument the CCP uses to enhance its efforts to propagandize its citizens, including by fostering animosity towards the United States, that can contribute to future hostilities. Priority should be given to penetrating and defeating (it).”

America invented the internet, and retains the ability to level China’s “Great Firewall.” Trump has but to give the order. Once it is taken down, the Chinese people will have access to information about what is happening in their own country and the world that is not subject to state censorship or control.

Among the other recommendations we made to the President were:

I lived in Hong Kong before the 1997 handover, and I shared the hope of the people of Hong Kong that it would become a beacon of freedom for the rest of China. Over the past 23 years, the city has proved that the people of China, like those in Taiwan, can live in peace, prosperity and freedom guided by democratic institutions.

That is, of course, precisely why the Chinese Communist Party is intent on destroying Hong Kong, and then moving on to destroy Taiwan as well. Both have illustrated to the Chinese people that there are alternatives to living under a one-party dictatorship, and so are a threat to that dictatorship.

As long as Hong Kong was allowed to rule itself, the hope remained that, as the President put it, “China would increasingly come to resemble its most radiant and dynamic city. The rest of the world was electrified by a sense of optimism that Hong Kong was a glimpse into China’s future. Not that Hong Kong would grow into a reflection of China’s past.”

That hope is now gone.

Clearly, this president is not afraid to make tough decisions. These are given in the spirit of putting the interests of America First, although certainly not America alone. Where the U.S. leads, others will follow. The joint statement on Hong Kong, signed last week by the foreign ministers of Australia, Canada, the U.K. and the United States, is an example of this.

If there was ever a time for the Free World to come together and stand against Chinese Communist tyranny, it is now.