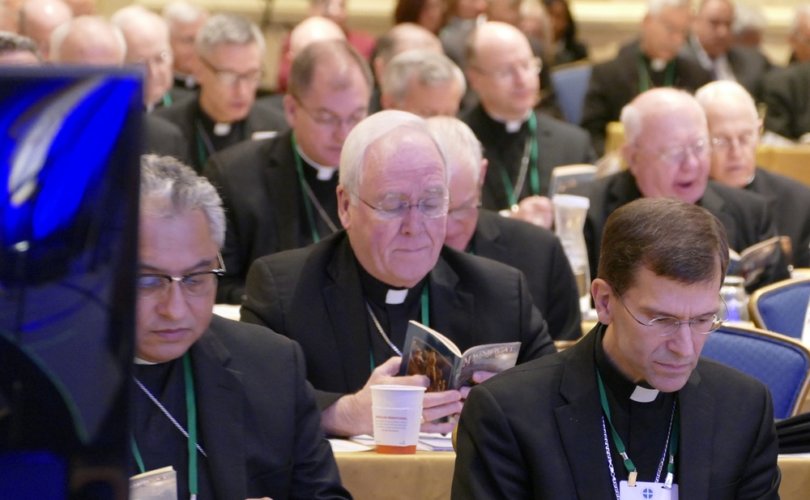 November 16, 2018 (LifeSiteNews) –  It was with the proverbial whimper that the recent USCCB meeting in Baltimore went out. The hoped-for and indeed expected bang was thwarted by forces without and within.

The Vatican commanded a halt to the United States bishops taking steps about the clerical abuse crisis and its episcopal component. In a particularly obnoxious example of the Peronist “style” of this papacy, the intervention—apparently known only to Cardinal Cupich, papal confidante and de facto head of the USCCB—canceled out subsidiarity, interfered with the legitimate jurisdiction of bishops, and cynically stepped on the very synodality that bishops were forced to vote for in last month’s rigged Youth Synod.

In this move, we saw an egregious return to the ultramontanist behavior of treating bishops as if they were vicars of the pope, rather than true shepherds who rule their own dioceses in Christ’s name and by His authority. The pope certainly has universal jurisdiction, but individual bishops do not rule on his behalf or by his leave. They rule by a right proper to themselves, which can be removed for bad behavior, but is otherwise inviolable, immediate, and non-transferable.

Put simply, bishops must rule their dioceses; they cannot pass the buck to someone else. They, and not the pope, are officially and normatively in charge of their particular portion of Christ’s Church. To act otherwise would be running away from the sheep and letting the wolves take over. Sadly, it would seem that the wolves have long since moved in and set up shop. It was disappointing, to say the least, that the U.S. bishops were not able to muster the courage to remind the Vatican of a few basic truths of ecclesiology enshrined in canon law, Church tradition, and (just saying) the documents of the Second Vatican Council.

There were forces within, too, that sabotaged the effectiveness of this plenary meeting. The attempt to frame a respectfully earnest request for all the McCarrick documentation was torpedoed by bureaucratic filibuster and the soft mockery of semi-lavender prelates. Thanks to the leftward-leaning tilt of the pushiest high-ranking members of the American episcopacy, the apparent lack of desire in the conservative minority to stand up to them, and the perpetual self-doubting hesitations of the greater number, the U.S. bishops as a whole could not agree on so much as an initial approach to the disciplining of abusive, complicit, unresponsive, or incompetent bishops. It was a very expensive, time-consuming way to say: “We don’t know what we’re doing; we’re not sure where we’re going; and what’s more, we’re content to leave things as they are, as long as we get to act as errand-boys for the pope.”

How different a world it would be if a number of U.S. bishops had stood up and said:

“We’re tired of this liberal, confusing, autocratic, Machiavellian, and destructive leadership in the Church, and all its pomps and works.

“We’ve had enough with the cover-up behind McCarrick, and, in general, with all the hypocrisy and corruption exposed by Viganò, whose testimonies have not only not been refuted, but have ended up being vindicated by all the attempts to respond to them (which is why the sound of crickets still predominates).

“We’re done with playing bellboys to a super-bishop rather than taking responsibility for our own flocks, individually and corporately.

“And most of all, we’re thoroughly sick of an endless stream of unsolicited rambling Vatican documents thick with sociologese and thin on the radical demands of the Gospel. From this point on, we could care less about exhortations, letters, sermons, press conferences, or curial blather. We have more important and more urgent things to do, like teach catechism, feed the hungry, celebrate the sacraments worthily and beautifully, support marriages and families, bring non-Catholics into the one true Church, reach out to people who are lost and wandering in the wasteland of modernity—and above all, save souls. That is our job: to save our own souls and the souls of the faithful entrusted to us, feeding them with sound doctrine, pure morals, and a truly sacred liturgy.

“So, unless you send us a pithy ex cathedra definition de fide et moribus with a tiara on top and a side of anathemas, we’re done wasting our time on the combination UN-EU that today’s Vatican has become. We’ve got several lifetimes of work to do just cleaning up our own act, the mess in our own backyard.”

Now that would have been a plenary meeting to remember!

Perhaps, if things keep getting worse, we may see something of this scenario play out, after all. As I like to say: stranger things than this have happened in the 2,000-year history of the Church.