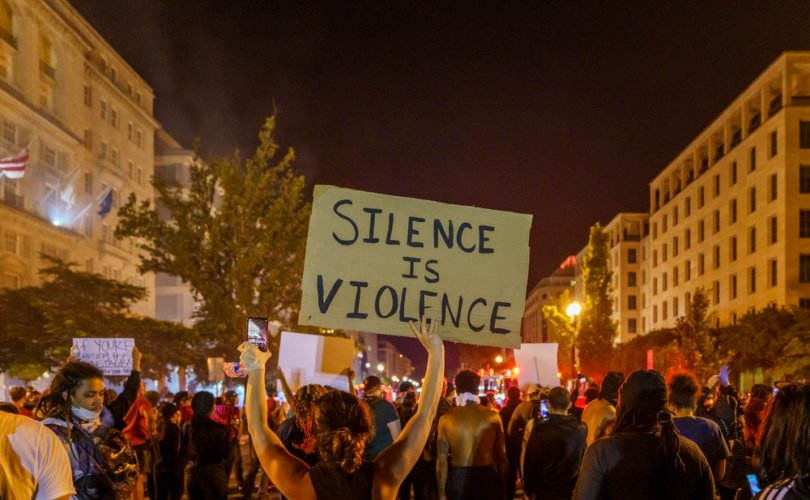 “What is the cost of lies? It’s not that we’ll mistake them for the truth. The real danger is that if we hear enough lies, then we no longer recognize the truth at all.” ― HBO’s Chernobyl

What is happening to our planet?

Petty bureaucrats delight in creating and enforcing arbitrary rules about everyday life. Attempts to launch an iconoclastic cultural revolution are picking up steam. Kindergarten now takes place over Zoom. Government hotlines have been created for people to report on others playing tennis, going to church, or showing their faces in public.

What can Catholics do in the face of this insanity?

First, we must pray and work on getting our own lives and souls in order. The Holy Sacrifice of the Mass is the highest form of prayer we have. We must take advantage of the graces offered to us in Holy Communion, especially now that we know how easily we can lose access to the Sacraments. St. Padre Pio said it would be easier for the earth to exist without the sun than without the Mass. Depriving the faithful of the Eucharist is like depriving us of oxygen. Frankly, I was dismayed over how eagerly bishops banned Masses at the onset of the coronavirus outbreak and how quickly their priests went along with it. One friend recently wished bishops and priests treated sin as seriously as they do the virus (and what we can only assume is fear of lawsuits related to the virus).

The deep feeling of abandonment so many Catholics felt when Masses were banned – not only because of the actions of our bishops but also those of many, many priests – was and still is very real. Some priests didn’t protest when they were banned from giving the Last Rites; others went along with episcopal orders to lock church doors, giving parishioners the clear message that the Church’s mission of giving out soul-saving sacraments was not really an essential service.

Receive Communion while you can. Try to find a priest who will give you the Sacraments, including the Eucharist. Go to Confession. Pray the rosary.

Read books that share accounts of keeping the faith under oppressive communist governments, like Bishop Athanasius Schneider’s Christus Vincit: Christ's Triumph Over the Darkness of the Age.

Second, we must understand group psychology and how cults operate. It is impossible to stress enough how important this is.

The Marxist mob feeds on loneliness and uses the universal desire for acceptance to coerce people into proclaiming the dogmas of the revolution, thus signaling that they are “with the program.”

In November 2018, cult expert and former intelligence analyst Stella Morabito wrote at The Federalist, “As a nation, we need to talk openly and clearly about the reality of coercive thought reform. We must understand how easily our minds can be molested when isolated from real conversation and debate. The only people who profit from such conditions are powerful elites in their never-ending quest to control the lives of others.”

“What about the transgender movement? Is that a cult? What about a huge administrative state? Does it operate in a cult-like manner? How about socialism? Does the socialist movement have features of a cult?” (Yes, yes, and yes.)

“The stated beliefs of any of the above groups are irrelevant to the questions above,” she explained. “To figure out whether something is a cult, you must just look at the tactics and methods of those groups, especially their tolerance for different points of view.”

Morabito, who has for years been sounding the alarm about the cult-like nature of political correctness and gender ideology, offered seven notes on how cults operate, based on the book Cults in Our Midst, by Margaret Thaler Singer. She also shared Singer’s list of the “six conditions practiced by cults.”

According to Singer, cults:

Anyone with ears to hear and eyes to see should be able to detect that what Singer and Morabito are talking about is exactly what’s going on today. The “new normal” we are constantly being told to accept is, in reality, a re-programming simulation being carried out in the aftermath of the coronavirus response and the Black Lives Matter movement.

Increasingly, Americans are being forced to isolate themselves. Sometimes this isolation is literally mandated by the state in the name of public health. Other times this isolation is a result of rejecting political correctness. For example, in June, one New York Times columnist urged people to text relatives and loved ones “telling them you will not be visiting them or answering phone calls until they take significant action in supporting black lives either through protest or financial contributions” (Morabito describes this as “emotional blackmail”).

Isolate people, break them down, reprogram them. They emerge as compliant, unquestioning bots, aware that no dissent is ever acceptable and that questioning any contradictions is a cardinal sin of the highest degree.

The simple fact is that this new “religion of wokeness” – being, as it is, an error – is full of contradictions and absurdities. For example, sex discrimination is wrong, it claims. But it also says there are no meaningful distinctions between men and women. Receiving Communion is too dangerous, its proponents argue. But sex with strangers is alright, “if you’re willing to take a risk” (according to this religion’s high priest Dr. Anthony Fauci). Similarly, going to church or protesting the lockdowns (even while wearing a mask) will spread the plague but rioting will not.

Essential for this new cult to thrive is that the collective memory of society must be whitewashed and cast out into the abyss. One way this is being accomplished is that Americans are increasingly told they are “white supremacists” for believing that any part of Western Civilization or Christianity should be preserved. It doesn’t matter if one believes black lives matter and wants to avoid spreading disease; what matters is that he goes along with the cult’s prescribed rituals related to these matters. Any deviance from the “party line” is unacceptable.

George Orwell’s 1984 quote about history comes to mind: “Every record has been destroyed or falsified, every book rewritten, every picture has been repainted, every statue and street building has been renamed, every date has been altered. And the process is continuing day by day and minute by minute. History has stopped. Nothing exists except an endless present in which the Party is always right.”

Just what is the antidote to the ongoing mass cult recruitment to the “Church of Woke” and the “Sanitary Dictatorship”? For one, speaking out, which empowers and inspires others to realize they are not alone and can share their same opinions. Building community, which combats loneliness, is also essential. Focusing on building strong, meaningful, and loving connections with family and friends is a must (Morabito has written about this extensively). And recognizing that yes, rejecting the cult recruitment of the mob may get you shunned or “cancelled,” but the consequences of going along with anti-freedom, anti-Christ, Marxist lies are far worse. As the two expressions go, “better to die standing than to live on your knees,” and “better to die with the Sacraments than live without them.”

Don’t be a conformist. Think for yourself. Ask questions, especially when you’re told not to ask questions.

Finally, take Sohrab Ahmari’s “Courage Pledge.” Ahmari, recognizing that people will continually be “asked to acquiesce to ever more extreme positions, on penalty of their jobs, livelihoods, family relationships and their presence in the digital public square,” crafted the following pledge for all free thinkers:

Say those words to yourself over and over, and live by them.

Stephen Kokx contributed to this article.