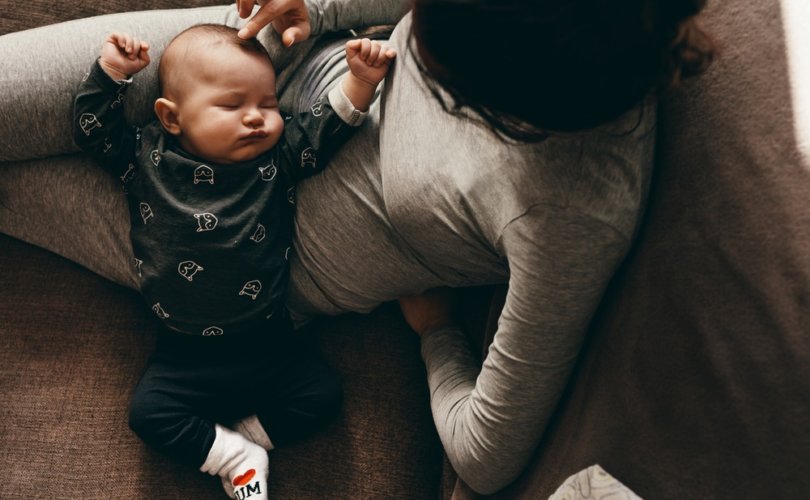 January 22, 2019 (LifeSiteNews) – “Out of sight, out of mind.” This simple saying accounts for much in the battle over the unborn. As long as people can make themselves not think about the tiny baby human they do not see, they can pretend as if he or she doesn’t really exist – or as if the child is “something” vague, indefinite, blobbish, not-yet-human. This explains, to a large extent, the opposition to laws that require an ultrasound image for women considering abortion. The proponents of abortion do not want them to see.

In one of his most profound works, The Mystery of Being, the twentieth-century philosopher Gabriel Marcel (1889–1973) draws the reader’s attention to “the mysterious character that attaches to the presence near one of a sleeping person, especially of a sleeping child.” He goes on to say:

But from the point of view of mystery, we might say that it is just because this being is completely unprotected, that it is utterly at our mercy, that it is also invulnerable or sacred. And there can be no doubt at all that the strongest and most irrefutable mark of sheer barbarism that we could imagine would consist in the refusal to recognize this mysterious invulnerability.

David Hume (1711–1776), a skeptical agnostic whose philosophy is opposed in almost every respect to Marcel’s, nevertheless makes a similar point in A Treatise of Human Nature:

‘Tis an aggravation of murder, that it was committed upon persons asleep and in perfect security; as historians readily observe of any infant prince, who is captive in the hands of his enemies, that he is more worthy of compassion the less sensible he is of his miserable condition.

Indeed, this is – or should be – evident to all. Hume’s predecessor, John Locke (1632–1704), a founding father of modern liberalism who defends an almost absolute right over one’s own property and one’s own body, nevertheless stresses that parents have no power over the lives of their offspring, for whose well-being they are accountable (see Second Treatise on Civil Government).

Yet the gradual degeneration of thought that has resulted in the almost universal acceptance of abortion, in which a child asleep in the womb is brutally murdered, is at least in part Hume’s fault. Hume was the first modern thinker to say that causality is a fabrication of the mind, a mere custom of thinking. That is, we can never know for sure whether one thing (say, a flame at the stovetop) is responsible for another (heating up the pot of water); it’s all a matter of the way we look at things. We can’t even know if a thing that appears to be the same – a dog or cat, for instance – remains the same as itself over the passage of time; it might be different every day, as when the ancient philosopher Heraclitus said that the sun was new each day, extinguished at night and newly born at dawn.

Whether they realize it or not, many people today have adopted Hume’s skepticism in the matter of abortion, although they would reject it in almost every other case of practical life. Just as we know that a man of 80 is essentially the same human being he was when eight years old, in spite of the changes that have taken place over the course of 72 years – a fact we acknowledge by calling him by the same name the whole time – so too, we know that an embryo or fetus = an unborn child or baby = a human being with a face, a heart, hands, and feet, already named or ready to be given a name. Embryo, unborn child, adolescent, youth, man, or woman are words that refer to different stages of the same developing reality; they refer to one thing, an enduring individual identity.

In spite of this common sense view, people talk and act as if a “fertilized egg” had nothing to do with a child or a human being, although it would be difficult to imagine a more obvious fact of nature. Seeing the unborn child through the ultrasonic window on the womb, seeing it as a little child resting peacefully in its mother’s bosom, is a way to bring home this fact, and turn it into conviction and care.