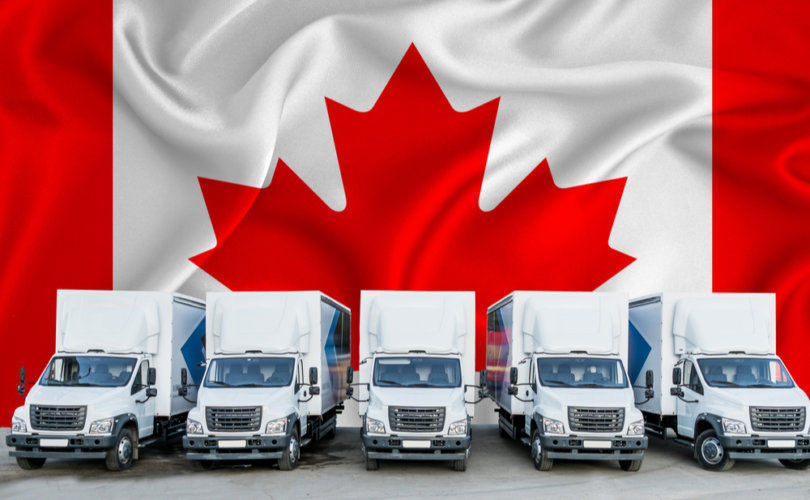 (LifeSiteNews) — In a twist of fate, after two years of increasing COVID communism in the Great White North, it looks like humble, courageous, and patriotic truckers might be the heroes who save this hallowed nation of snow and ice.

In his letter to the Hebrews, the Apostle Paul tells us, “For whom the Lord loveth, he chastiseth.” In essence, God disciplines those He loves. Well, if that is the case, then God must really love Canada, because we have lived in a Trudopian dystopia for some time now, and until now it seemed that there was no end in sight.

We have been beaten down, divided, castigated and gaslit by the elites and feckless politicians — both liberal and conservative — since the pandemic was declared. We have been segregated into classes of clean and unclean, and our society has become unrecognizable.

But every nation has a soul, and every soul is immortal. Underneath the steaming pile of dung that is the Trudeau government, there is a beating heart within a beaten body, that is animated by a Canadian soul that looks like it is ready to rise, fight, and not back down.

What is actually happening?

Currently, truckers are facing a vaccine mandate by the federal government, which essentially makes it impossible for them to cross the border into the U.S. and do their job, unless they acquiesce to the whims of the health tyrants in Ottawa. Many truckers are vaccinated, but they are not fans of segregation and coercion. Even those who have taken the jab are not impressed by Trudeau’s nonsense.

LifeSiteNews journalist Anthony Murdoch wrote a story outlining what is taking place as part of a collective response on behalf of freedom-fighting truckers across North America: “Over the weekend, truckers and their supporters from western Canada began their caravan, starting from cities and towns in British Columbia, with thousands of Alberta truck drivers joining yesterday. Some estimates put the total amount of truckers who will take part in the caravan at well over 50,000 trucks and more than half a million people.”

The nation depends on functioning trucking infrastructure, and the pressure of supply chain disruptions by delays in the delivery of goods is intended to wake up the government to the harm its idiotic policies are causing.

The truckers are well organized, and well-funded, raising upwards of 4 million dollars with more time to go. The money will be spent on the needs of truckers who have joined the convoy and cannot afford the costs without help. Lodging, fuel, repairs, etc. will be covered by the organizers, and the remaining money will go to veterans’ groups across Canada to support Canadian soldiers. The transfer of money to truckers will follow strict procedures, with the submission of receipts, and will be accounted for properly.

So Thursday we recorded this and they had raised 500k … only a few days later and it’s in the millions.

Where’s all that trucker money going you ask….

“Left over money is being donated to Veteran Society’s across Canada” – Chris Barber pic.twitter.com/6q5hMJq14b

However, the legacy media, is doing everything it can to distort the message.

There is an expression: There are lies, damned lies, and statistics. We might say, there are liars, damned liars, and legacy media journalists.

For anyone who has a functioning brain and can walk and chew gum, it is clear that the truckers are fighting for the freedom of all Canadians, in order that we may be liberated from medical slavery. However, this is not congruent with the narrative the mainstream propaganda outlets have vomited forth for the past two years.

For them, it is just unfathomable that millions of Canadians might not actually like lockdowns, or vaccine mandates, or segregation, or hateful politicians. They just cannot get it through their thick communist craniums that Canadians by and large want to be free people who can live like its 2019.

This has led some lame-stream media outlets to bend the truth, both about the size of the operation and the purpose.

Thousands, nay, tens of thousands are headed to Ottawa, and they are not just protesting the vaccine mandates for truckers, but they have said they will not leave the nation’s capital until every single COVID-inspired mandate is dropped.

It has been two years, our country is on the brink of destruction beyond repair, and enough is enough.

The Globe and Mail — a national rag that is so leftist it makes the Washington Post look like Breitbart — released a piece entitled, “Trucker convoy raises millions in funds as vaccine-hesitant supporters flock to cause.”

They have no idea who is vaccinated and who isn’t, and who supports the truckers and who doesn’t. The majority of Canadians are vaccinated, but one can both be for taking a particular medicine and against forcing someone to do the same thing if it is against their will. Apparently, this sort of higher-order thinking is too much for Canada’s information guardians — God help them if they ever have to do something so complex as following traffic signals.

The Truckers were made for this

Truckers are the perfect heroes for this moment.

They are independent, so they think for themselves, yet they know how to work together in national and provincial harmony.

They know how bureaucracy works, as they work in one of the most heavily regulated industries around, which means they know exactly what their rights are.

They are mentally tough as well, and know how to be patient — have you ever stayed awake for what seems like days on end while keeping your focus in bad weather and highway traffic?

Truckers are also highly organized. Have you ever witnessed what a dispatching operation looks like? Put it this way, unlike Trudeau’s budget that “balances itself,” truckers actually have to plan things for a living, and find solutions to problems.

They are humble and desire to serve. You don’t become a trucker to be famous, you become a trucker because you like putting in a good day’s work, and you want to do a good job for your community.

Truckers love their country. They meet people from all over the nation, and they know what they are fighting for — a beautiful nation full of wonderful people.

They also hold the fate of the country in the palm of their hands; if they stop working, you stop eating, yes, even you, Trudeau.

It also doesn’t hurt that they basically drive tanks for a living. Seeing thousands of trucks parked and revving their engines outside their front door might be one of the most terrifying scenes the cowards in parliament will ever see.

Dare we hope the Canucks be saved?

Desiring to live as a free man in a nation where the tyrants want to be the master of your soul is a psychologically and spiritually exhausting endeavor — it is a war of attrition between hope and despair. On the one hand we must realize that the men in charge are mostly devils, but on the other hand we must remember that devils have their hour, but God has his day.

It could be that this Canadian Spring might fail, but it could just as well succeed.

Personally, I have a good feeling about this — it has teeth.

What will Trudeau snack on after a long night of wearing black face if avocados and soymilk stop coming into the grocery stores?

What will the Zoom class do when they flash their vaccine-virtue pass at their favorite restaurant, only to sit down and see that the worst has happened — their favourite California Cabernet has not been restocked?

The current elitist class is a pathetic group of soft individuals who are addicted to creature comforts. But this nation was not made by such men.

Our forefathers stared down roaring seas, only to bring them into submission. They faced scurvy, frostbite, and hostile weather, only to double down on their efforts to populate a frozen tundra. True Canadians are of this ilk, and there are still some out there. Trudeau and his henchmen are no more Canadian than Joe Biden is Catholic, and they are being shown for the imposters and usurpers they really are.

True Canadians are rugged, kind, generous and gritty. If we can handle sub-zero living, we can withstand the hot air from the blowhards in Ottawa. I think we have forgotten that our national sporting pastime is a combination of boxing and sword-fighting while men skate with blades on their feet, launching vulcanized rubber disks at a hundred clicks/hour.

We will be free, we will not back down, and it is the truckers with their patriotic chariots that will bring this government to its knees.

Makeready, stock up, and be prepared for rocky roads before the spring weather thaws the ice-cold tyranny that has enwrapped our national soul.

Pray for the truckers, pray for Canada, and pray for each other.

To the truckers I say: May God bless you and keep you, get after it, boys.