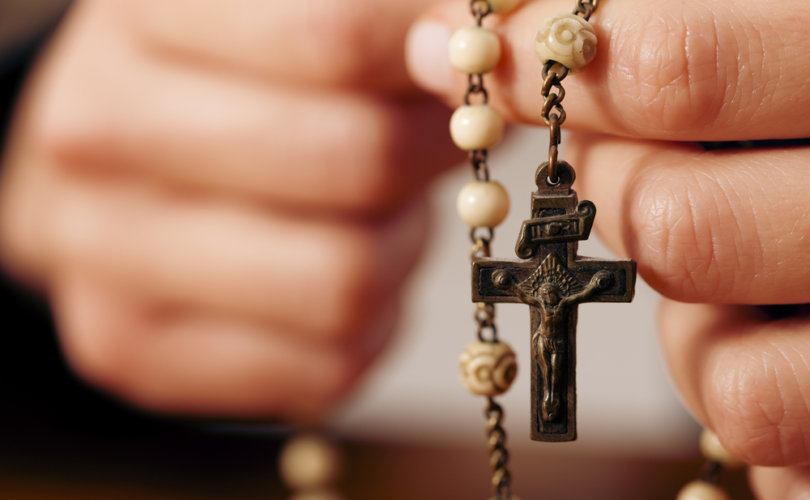 VIENNA (LifeSiteNews) — An Austrian initiative to implore supernatural assistance against draconian COVID lockdown regulations and threat of mandatory COVID jabs is spreading around the world.

In late November, an Austrian named Louis-Pierre Laroche started a new Rosary campaign in honor of the Blessed Virgin Mary for “peace and freedom,” and the “Kingship of Christ in society.” These public prayers take place every Wednesday. So far, nearly 150 different Austrian groups have joined this campaign, and prayer groups all over the world are being set up, as well. “Austria Prays” is the title of this initiative.

Laroche told LifeSiteNews that the “Rosary for Austria” initiative, which includes regularly praying the Rosary in front of a church, at a marketplace, or through the streets as a procession, has its origins in a public Rosary prayed in Vienna every Wednesday. Begun by other Catholics, this prayer event attracted Laroche, who participated a couple of times. Additionally, he and his large family attended a local monthly public Rosary that had been started by an elderly man in Wiener Neustadt. Finally, the Society of St. Pius X (SSPX) in Austria started a Rosary campaign on the first Sunday of Advent.

“All of this has inspired me,” Laroche told LifeSiteNews.

“In a country where every village has a Marterl [wayside shrine], a statue of the Mother of God, or a Holy Trinity column, why not organize prayers every Wednesday evening on a public square, so that all who wish to do so – without a long trip – can pray?”

This new Rosary campaign is also a response to the dire political situation in Austria, which, because of the current coronavirus crisis, has again established harsh lockdown rules and even plans to establish a general vaccine mandate in February 2022.

“We also pray for our government, that they may realize that the planned coercive measures are not the right solution,” Laroche explained.

It seems that this father of 11 children is at least partly to thank for Catholics being permitted to meet and pray in public despite the lockdown rules. After the first lockdown last year, where such prayer gatherings were forbidden, Laroche lobbied government officials for special permission for prayer gatherings. He considers it a “miracle” that these meetings are now allowed by the government.

Laroche is concerned about the divisions in society caused by the current coronavirus policies, and he hopes that the Blessed Mother will help to solve the current crisis; it seems insurmountable in natural terms. One of his goals is “the waking up of the Catholic laity and clergy,” he told LifeSiteNews.

Laroche hopes that, in the event of an even worse crisis developing, Christians would receive, with the help of these public Rosaries, “enough strength that they are able to handle it.”

When asked, how Austria could exit this current crisis of lockdowns and mandates, Laroche explained that “we are also praying for our leaders, that they realize that the planned coercive measures are not the right solution. How this could take place is not clear to me, and it would be a miracle in light of the continuously one-sided policies.”

In the early 1950s, Fr. Petrus Pavlicek, OFM organized a series of public Rosary processions, with hundreds of thousands of participants, at the end of which appeared the surprising withdrawal of the Soviet Union from Austrian soil in 1955. This truly astounding historical event is still today an encouragement for Austrians, but now it is one also for growing numbers of people in Germany and even the United States.

Raphael, a participant in Austrian Rosary events, told LifeSite that, while many had prayed Rosaries for years in private, the need to pray “for peace, freedom, and protection of mankind” has now drawn people out into public spaces.

“And the initiative is connecting people in Austria and in a growing number of countries in the whole world,” Raphael added.

“It is amazing how people become active where they are by bringing friends and neighbors and inviting their parish priest to pray with them. We faithful are receiving new strength and encouragement, and many who have never prayed the Rosary before or do not (yet) believe, join us, because they are touched and feel invited by the witness of hope.”

The common experience, as expressed by this participant, is: “We are not alone! God’s blessing and the intercession of the Mother of God give us new hope and strength. The Blessed Virgin Mary alone, full of the Holy Spirit, is the true initiator and leader of every Rosary movement, calling and uniting us in prayer.”

Another participant in the growing Rosary campaign, Sandra in Germany, described to LifeSiteNews how this initiative first grew in Austria, where the “split in Church and society,” caused by the impending vaccine mandates, was felt particularly strongly. The same applies to Germany and other countries.

Sandra joined the group via Telegram.

“When I became member of the groupI saw that there was already also a group for Germany,” she explained.

“Later followed the founding of groups in Switzerland and Italy.”

Since her fiancée is an American who lives in Oregon, they decided to found a Rosary campaign for the United States.

“We hope that more and more people will assemble everywhere and pray publicly the Rosary in order to storm heaven in order to re-establish unity and peace in our countries,” Sandra added.

Mr. Laroche seems surprised about this rapid growth of the Rosary initiative.

“I myself had only thought of Austria,” he admitted.

“But it spread like wildfire to Germany and then Switzerland. In the last days, in went also to other countries (Italy, Slovakia, and so on).”

In fact, there were 727 events in total planned in Austria, Germany, Switzerland, and Italy as this article goes to press.

For Mr. Laroche, this rapid spread of the Rosary campaign is a sign that “I am merely a small tool of the Blessed Mother to re-kindle throughout the world the devotion to her. I have no control over that.”

LifeSite’s Jim Hale just published a video of a rosary in Front Royal, Virginia, which was directly inspired by the Austria prays initiative.