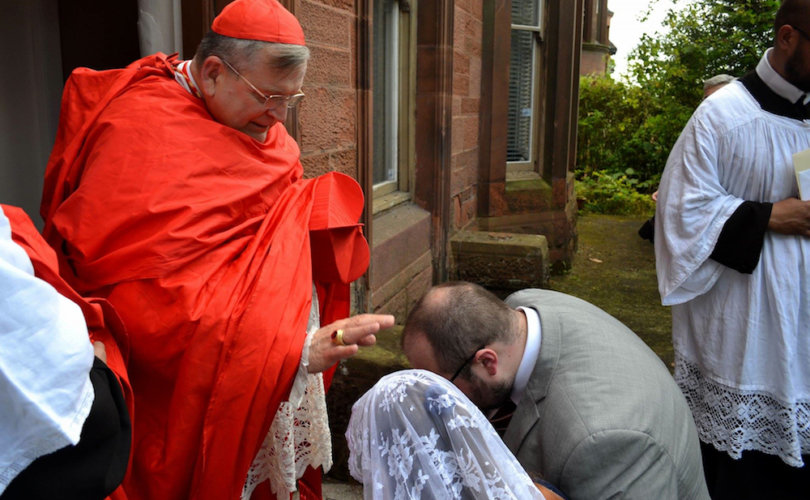 Cardinal Raymond Burke blesses a couple and their unborn baby in Glasgow, Scotland.

GLASGOW, Scotland, September 5, 2017 (LifeSiteNews) — “This is why I love Glasgow,” sighed someone as we drove around the city’s gritty periphery. “This, too,” he added as we passed a smashed bus shelter.

Strangely, for Glasgow, September 2 was a delightfully sunny day.

“We must be near the church,” said the driver. “There are some priests.”

“Those aren’t priests,” I said, peering at the black-clad men walking up the winding road. “They’re hoodies.”

Edinburghers love to poke fun at Glasgow, but to Glasgow a dozen Edinburghers went, joining a crowd of more than 500 people at Immaculate Heart of Mary Church, Balornock for a Pontifical High Mass offered by American Cardinal Raymond Burke.

The Mass was organized by Fred Stone of Una Voce Scotland, the nation’s traditional Latin Mass society. Stone sent an invitation to the Cardinal’s secretary, and the secretary found a blank spot in the Cardinal’s engagement calendar.

My party arrived an hour early so the laity among us could stake out pew space. The little church, which normally seats 350, was filling up fast. To get to the nave, we had to cross the small parish hall. It had rows of chairs and a film screen set up for the sake of the overflow crowd. Both the inside and the outside of the church had been repainted for the big day, and the grounds had been tidied up, too.

“It was needed,”  Stone told me wryly.

Prominent among the growing congregation were couples with children. Traditionalist Girl Guides gathered in knots, chatting happily while waiting outside for the Cardinal. Young mothers cuddled their babies. Two girls in neat school uniforms held the Vatican flag aloft at the gateway to the little garden in front of the church while their mother, Marie Geraghty, dusted their carefully polished shoes.

Geraghty, who lives in Glasgow, is a great fan of the Cardinal “because he speaks up for the truth,” she told me. She is longing for a resolution of the confusion that has befallen the Catholic church, to say nothing of a better appreciation of authentically Catholic values in Glasgow schools.

Bagpipe music filled the air as a young piper in Highland dress took up his post on the sidewalk. He limped slightly. The piper’s father, Michael, proudly told me that his son had recently fractured his ankle playing rugby but insisted on wearing his proper piper’s shoes.

By a quarter to noon, a squad of priests were on the sidewalk arranging themselves by rank and years of ordination, and a platoon of altar servers had amassed outside a side door.

Photographers stood expectantly by the church entrance, and suddenly there emerged from the side door a most recognizable figure dressed in scarlet. The pipes skirled anew, and one of the most famous Cardinals in the Catholic Church cheerfully processed with 10 priests and 16 altar boys into a humble church in battered north Glasgow.

The choir burst into Edward Elgar’s “Ecce Sacerdos.” Balornock may not be the smartest part of Glasgow, but it has a great choir at Immaculate Heart. Directed by organist Fraser Pearce, 26, the Schola Una Voce provides Father Mark Morris and his parishioners with both Gregorian chant and polyphony for their traditional Latin liturgies.

Symbolism of the cappa magna

Before the Mass truly began, the Cardinal took his place on a borrowed scarlet-curtained throne and was stripped of his enormous scarlet cloak, the famous cappa magna. This action symbolized the Cardinal putting aside the trappings of ecclesiastical prestige before celebrating the liturgy. He was then redressed in the white alb of baptism, the dalmatic, the stole and the chasuble, symbolizing putting on “the new man” of Christ.

The Pontifical High Mass is rich with symbolism, gesture and music. Lasting two hours, it was not for the easily distracted. However, the entire congregation, which spilled out the doors of the hall to the pavement outside, was rapt. Even the babies kept their gurgling to a minimum. The liturgical silence was deep.

In his sermon, Cardinal Burke preached on the message of Fatima. Detailing the three parts of the revelations made to Sister Lucia, the Cardinal praised the Immaculate Heart of Mary “which never ceases to beat for us.” He held up Mary’s directions at the wedding feast of Cana — ”Do whatever [my Son] tells you” — as an expression of her “divine maternity.”

“How wonderfully she has shown her divine maternity to us at Fatima,” said Burke.

Cardinal Burke also acknowledged the 10th anniversary of Summorum Pontificum, Benedict XVI’s motu proprio acknowledging that the Usus Antiquor — or Old Rite — of the Mass had never been abrogated and should be made available to the faithful. He invited the congregation to join the Summorum Pontificum pilgrimage to Rome in September.

When Mass was ending, a waterfall of sound poured through the church and into the street as the entire congregation sang the Salve Regina. This was followed by a Te Deum, a traditional hymn of thanksgiving dating from the fourth century.

After Mass, the happy crowds followed the Cardinal outside into the sunshine or paused at tables covered in cocktail sausages, sandwiches, sausage rolls and, eventually, cake. While stuffing myself with sandwiches, I chatted with Padraig, a 21-year-old university student who  traveled an hour by bus to get to the Pontifical High Mass.

“It’s the fullest and finest expression of the Roman Rite,” he explained. Padraig loved the Mass, but he was particularly impressed by the congregation. “I’ve never seen so many men at Mass all at once,” he said. “It was very moving to hear them all singing the Salve Regina.”

I also spoke to John, who was slightly abashed to have been buttonholed by a reporter at Cardinal Burke’s Mass. Not only is he a Scottish Episcopalian, he is the convenor of his church’s liturgical committee. John had been dragged along by Catholic friends. He said, however, that he was struck by the mix of people, particularly the young adults, children and babies, and by how many young people were involved, not just in the worship itself but in liturgical roles. Although a non-Catholic, John found himself caught up in the Mass; “I felt very included,” he said.

Scottish author Gerald Warner told me that he found the Mass a “most edifying and splendid occasion.” “We need more of them,” he declared. He observed that the Cardinal “bears up extremely well under what must be stressful circumstances [in the wake of Amoris Laetitia] — and the weight of the vestments!”

Tom, a 31-year-old doctor, traveled from Haddington with wife Felicity and their two little daughters to attend the Mass celebrated by Cardinal Burke, whom Tom described as “a good lad.” Tom said he takes his children to the old version of the Mass because “there are more younger couples at the Old Rite with kids [in Scotland], so people at the Old Rite are more understanding about kids.”

Mark Morris, 25, came from St. Andrews University by train to serve at the Mass. “There are few more beautiful things you can do as a young person than serve at the Usus Antiquor,” he told me. He also admires Cardinal Burke. “I don’t think I’ve ever met such a gentle and holy priest.”

Another young man, Adam Coates, 25, told me that he prefers to attend the Old Rite but that it is hard to find in the rural part of England where he lives. Of Cardinal Burke, he said, “He speaks the truth, and when you read what he says, he sounds like a saint. There’s clarity, boldness and authority there.”

Two middle-aged women, Julienne and Mary, stood in the middle of the hall discussing the homily. “I think [it] should be printed in LifeSiteNews,” said Mary. She declared that readers didn’t want to know what she thought but what Cardinal Burke had said. Julienne, the mother of two of the Girl Guides, told me that that the Guides, who sat in the front row, were the Cardinal’s honor guard.

Outside in the sunshine, Carolina Silva, 26, and her husband Miguel were smiling. They had traveled from Edinburgh to worship at their second Pontifical High Mass. “It was very beautiful to see … the reverence,” said Carolina. “And the music is much more beautiful than at normal [traditional] masses. They put in more of an effort for a special occasion.”

Carolina enjoyed the homily, too. “It was very good, especially because it was about Fatima and I am Portuguese! It’s always good to hear someone talking about the importance of Fatima.”

A more masculine form of the Mass

“Stop interviewing people and come along,” yelled my driver, so I obediently followed him. But I couldn’t resist asking the laconic altar server beside me in the back seat for the inside scoop. Euan, 23, is a graduate in mechanical engineering from Edinburgh University and has served at traditional Latin masses for a year and a half.

“I was quite nervous thinking about all the things that could go wrong,” said Euan. “I was at the practices so I knew.” Performing all the liturgical tasks correctly is very important, he thinks, “because [at Mass] we’re carrying out the most important function possible here on earth.”

Dozens of young men in a Scottish Catholic church on a Saturday afternoon seemed rather unusual, so I asked Euan why he thought some young men prefer the Old Rite.

“It’s a more masculine form of the Mass,” he said. “It leaves you alone. You’re free to engage if you want or you can focus on your private prayers. You’re not integral to what is going on.”

As for Cardinal Burke, Euan approves of the decisions he has made concerning Amoris Laetitia. “He’s got the right idea,” said the young engineer. “The sooner he makes the formal correction the better.”

On the following day, Sunday, September 3, the Catholic bishops of Scotland consecrated their country to the Immaculate Heart of Mary.