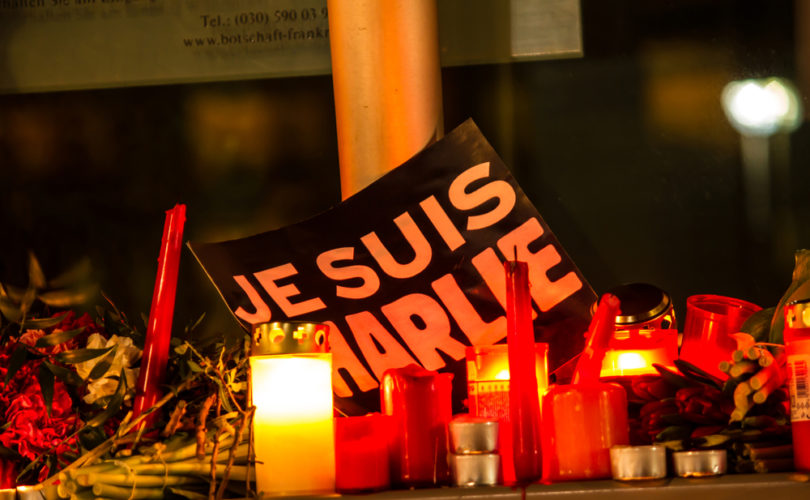 This past week, Christians were offered a bleak choice: either you are with Charlie Hebdo – “Je Suis Charlie” – or you are with the Islamic terrorists who murdered ten of their staff members last Wednesday. Effete Western nihilism, or bloodthirsty Islamism. Your choice.

In this sense, the tragedy offers us a perfect microcosm of this century’s great struggle. But the choice is, of course, a false choice.

As the number of Islamist attacks grows – London, Ottawa, Sydney, Paris – and, we all presume, will continue to grow, it is increasingly difficult to know how to respond. With each new attack, an increasingly secular West seems to dither all the more, incapable of truly understanding or responding to the religious drive behind the attacks. All the while, young, angry Islamists, morbidly inspired by the actions of ISIS, grow a bit cockier and a bit more dangerous.

How curious it is that our culture’s martyrs are men that don’t even believe in the concept of the sacred! That some of our bravest men – as the Charlie Hebdo cartoonists certainly were – will risk so much just to make the point that there isn’t any point.

One journalist astutely observed: “With each new strike they win more deference, and inspire more support among young Muslims. Each punch they land sounds the hollow in the decadent Western chest. We will not even acknowledge that we are at war, so complete is our surrender.”

Nowhere does that self-delusion manifest itself more clearly than in the secular Western media. On the radio today, I listened as a CBC executive tried to explain why he nixed publishing the Charlie Hebdo Mohammed cartoons. It was not fear, he insisted. He wasn’t pandering to the extremists. Rather, he wanted to be “sensitive” to the fact that Muslims might be offended by the images.

I almost cheered when the host finally asked the obvious question: why does the CBC – and indeed most media outlets – have no qualms about deeply offending Christians? Is it not, she inquired, citing CBC’s decision to publish photos of a crucifix in urine, because journalists are aware that insulting Christians will not result in their offices getting firebombed?

“I reject that completely,” the CBC executive snapped back. “Christians just don’t take their beliefs as seriously.”

He’s lying, of course. The reason the media and academia have no qualms about offending Christians is because they view Christianity as a threat to the secular progressivism with which they wish to replace Christianity. They deliberately intend to undermine Christian values.

And, of course, they are afraid of what will happen if they publish the Mohammed cartoons. But in spite of this (not unreasonable) fear, media figures of every stripe have been declaring “Je Suis Charlie” – I Am Charlie – in solidarity with the slain cartoonists. Some conservative commentators have mocked this response, arguing that these media outlets are not, in fact, anything like Charlie Hebdo. They have a point, and yet I don’t entirely agree.

Charlie Hebdo is the epitome of what Western culture has become: nihilistic, pseudo-pornographic, and disdainful of the idea that anything at all can be considered sacred. In much the same way, the secular media scorns the sacred. Where the difference lies is that they’re not brave enough to be as consistent as Charlie Hebdo was. The idea that the CBC or the New York Times has any respect for the Muslim prophet – or indeed, any prophet – is laughable. But they don the mantle of multiculturalism to avoid looking like cowards.

How curious it is that our culture’s martyrs are men that don’t even believe in the concept of the sacred! That some of our bravest men – as the Charlie Hebdo cartoonists certainly were – will risk so much just to make the point that there isn’t any point.

That is why I will not say “Je Suis Charlie.” Because, while I admire the physical courage of the murdered cartoonists, I also know that the nihilism they and their magazine promoted is the very stuff on which Islamism feeds and thrives. Aggressive secularism has been gutting European culture of Christian values for decades. The Islamists have been filling this moral vacuum with their own set of values. So when we in the West bluster about “defending our values,” it rings hollow. What we’re really talking about is the right to crudely point out that we have none.

As a result, the false “us-versus-them” dichotomies our media presents us with have become increasingly ridiculous. Another example is the recent controversy surrounding the film The Interview. After North Korea allegedly hacked Sony as revenge for depicting the assassination of Kim Jong Un, many people, even some Christian media figures, declared that we should go watch this stupid, trashy Seth Rogen movie as an act of defiance. Why would I, or any Christian, do that? We can reject both the totalitarianism of our enemies, and the pointless smut that passes for “humor” today in the West.

Two opposing sides, both offering death. Nihilism versus Islamism. Carnality versus carnage. Perhaps David Warren put it best, and so I will not try to do better: “But the real battle…is not Islam versus an empty licentiousness. That is too easily won. It is instead Christ versus Mohammad: the only battle in which they can be thrown onto the defensive; in which their own children can be turned against them.”