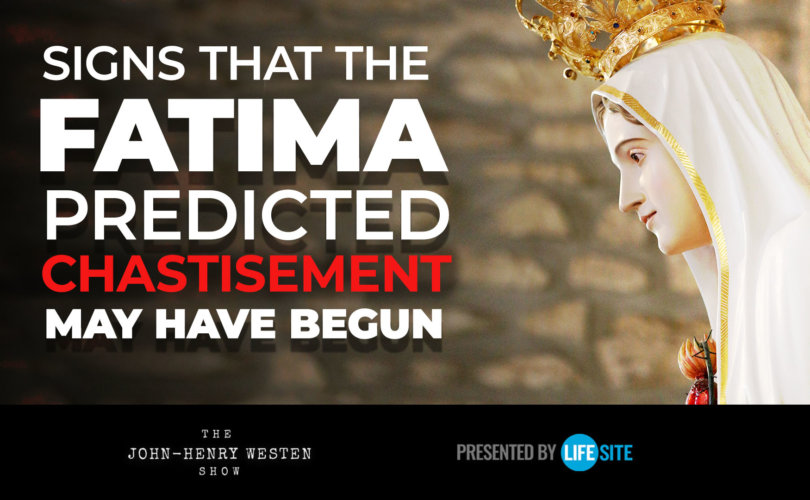 May 21, 2020 (LifeSiteNews) – We just passed the 103rd anniversary of the first apparition of Our Lady of Fatima on May 13 – the Mother of God appeared to three shepherd children in Fatima Portugal to warn them and all mankind of coming chastisement unless the world turned from its wicked ways back to Christ.

The October 13, 1917 Fatima miracle of the dance of the sun was witnessed by 70,000 people with coverage in all the secular papers at the time. It was the most spectacular public miracle of all time. What was it that heaven was trying to communicate with this stupendous event?

Specifically, she warned of coming grave offences in terms of impurity which leads more people to hell than any other sin. She asked for prayer of the rosary and consecration to her Immaculate Heart as remedies to the outrages caused against the Sacred Hearts of Jesus and Mary. She said she would also come back again to ask for the consecration of Russia by the Pope and all the world’s bishops.

Our Lady warned specifically that if Russia was not consecrated there would be “wars and persecutions against the Church. The good will be martyred, the Holy Father will have much to suffer, various nations will be annihilated.”

She predicted the Second World War, and it happened. She predicted “fashions will be introduced that will offend Our Lord very much. Woe to women lacking in modesty.” And it happened like never before in the history of the world. She predicted wars, and there have been more wars in the last thirty years than ever before. We have not yet seen whole nations annihilated.

“In the end, My Immaculate Heart will triumph,” she promised. “The Holy Father will consecrate Russia to Me, which will be converted, and a period of peace will be granted to the world.” We await that peace eagerly both in the world and in the Church.

When we fulfill Our Lady’s requests for Communion of reparation on the First Saturdays and the Holy Father responds to the explicit request of Our Lady of Fatima as Cardinal Burke spoke of Wednesday to consecrate Russia to Her Immaculate Heart, we will see the Triumph of the Immaculate Heart. That is – a glorious never-before-seen peace on earth. A time of great rejoicing and faithfulness is coming and in fact is around the corner.

There is immense hope in this truth, in this promise. And I don’t think we have too long to wait.

Heaven seems to have offered a bit of a timeline on these things which is recorded in the writings of Sr. Lucia dos Santos, the only one of the three Fatima seers who lived to adulthood.

It was to Lucia that Our Lady appeared again in 1929 – June 13, 1929 to be exact. She then requested that the Pope, in union with the world’s bishops consecrate Russia to Her Immaculate Heart. The only problem was that it never happened, and heaven showed It’s frustration.

Our Lord Himself appeared to Sr. Lucia in a vision in 1931, expressing dismay that the Pope would not carry out the consecration of Russia as requested. “Like the King of France, they will repent of it, and they will do it, but it will be late. Russia will already have spread its errors in the world.” He added, “Make it known to My ministers, seeing that they follow the example of the King of France in delaying the execution of My demand, they will also have to follow him into misfortune.”

That warning has implications for our days and perhaps a bit of a timeline too. The mention of the King of France by Our Lord refers to the request he made of St. Margaret Mary Alacoque. On June 17, 1689 Jesus asked her to have the King of France consecrate France to His Sacred Heart. For 100 years the Kings of France failed to make the consecration.

On June 17, 1789, 100 years to the day of the request, the King of France was stripped of his legislative authority and four years later executed.

So, Our Lord’s warning to Lucia that the Pope and bishops are following in the example of the King of France in refusing to do the consecration and that they’d follow likewise in misfortune is very significant indeed – perhaps significant also in terms of the 100 years-to-the-day timeline.

When are the 100 years up for the request of Our Lady of Fatima to consecrate Russia? Remember in 1917 Our Lady said She would return to ask for the consecration, and then appeared again to say it was the time to do it on June 13, 1929. And we’re less than a decade from the centenary of Our Lady’s request for the consecration of Russia which would be June 13, 2029.

Let us play our part in hastening the Triumph of the Immaculate Heart. Let us pray the Rosary, wear the Scapular, make the First Saturdays devotion and request the not yet done explicit consecration of Russia to the Immaculate Heart as Cardinal Raymond Burke called for Wednesday at the Rome Life Forum. Let’s pray that it may come before June 13, 2029.

Are there signs today that suggest that we may have entered the Fatima-prophesied chastisement? Not only has Russia spread her errors all over the world, but for the first time in history the greater part of Catholic humanity has been deprived of the Holy Sacrifice of the Mass.

We will never be able to comprehend the gravity of this fully. But in order to appreciate it somewhat, hear the words of St. Alphonsus Ligouri in his Discourses on the Mass and Office. He wrote: “A single Mass gives more honor to God than can ever be given to Him by all the prayers and austerities of the saints, all the labors and fatigues of the Apostles, all the torments of the martyrs, and all the adoration's of the Seraphim, and of the Mother of God.”

For the last few months, this, the greatest of treasures on earth, the very pearl of great price, has been taken from us. It is a loss beyond comprehension. And as this deprivation continues it brings to mind the apocalyptic warnings of Christ Himself which we read in the gospel of Matthew. “When therefore you shall see the abomination of desolation, which was spoken of by Daniel the prophet, standing in the holy place: he that reads let him understand.  Then they that are in Judea, let them flee to the mountains.”

The verse from Daniel which Our Lord references is this Daniel 12:11 “And from the time when the continual sacrifice shall be taken away, and the abomination unto desolation shall be set up, there shall be a thousand two hundred ninety days.”

In a conversation with some of my closest friends I mentioned that the removal of the Mass from nearly all the faithful throughout the earth seems like a fulfillment of that prophecy, and I’m praying that it will not last as long as predicted – 1290 days or about three and a half years. It was pointed out to me, however, that of course the Holy Sacrifice has not in fact ceased since priests continue to offer the Mass privately. Nonetheless, it seemed to me that even in the worst of times to come, should all Masses be banned under pain of death, there will always be faithful priests who secretly offer the Holy Sacrifice happy to risk their lives for doing so.

This notion was bolstered by the interpretation of St. Robert Bellarmine in his famous workOn The Roman Pontiff, who interprets this passage from the Book of Daniel as saying that “all public ceremonies and sacrifices of religion will cease.”

There are likely all sorts of other explanations too of course, but, I wonder if these signs indicate that the chastisement predicted at Fatima has begun? I’d guess things will likely get much worse before they get better. But, the good news is that the Fatima chastisement, whenever it happens, is the prelude to the most glorious time of peace and conversion that will ever be granted the world.

Thirty years ago now, Pope Benedict XVI hoped and prayed for the Triumph of the Immaculate Heart. On May 13, 2010 he hoped it would occur by the centenary of the first apparition of Fatima – May 13, 2017.

Pope Benedict said: “May the seven years which separate us from the centenary of the apparitions hasten the fulfillment of the prophecy of the triumph of the Immaculate Heart of Mary, to the glory of the Most Holy Trinity.”

Let us too be hopeful in this same way and pray that we will see the Triumph of the Immaculate Heart within this decade that corresponds to the message Our Lord gave to Sister Lucia comparing the King of France to the Pope. ‘May the nine years which separate us from the centenary of Our Lady’s request for the consecration of Russia hasten the fulfillment of the prophecy of the triumph of the Immaculate Heart of Mary, to the glory of the Most Holy Trinity!’