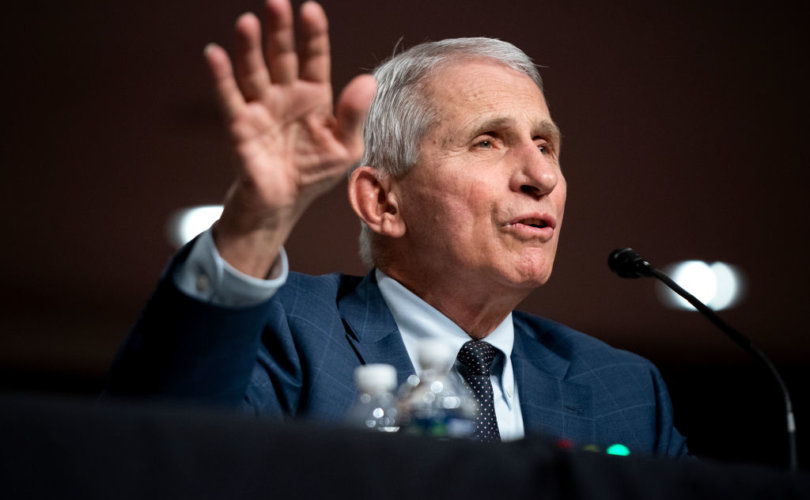 (LifeSiteNews) – Dr. Anthony Fauci is making waves in the media again – shocker! – and this time it is because of a joke, which he found very funny, wherein he joked about creating the original US COVID strain …  in his kitchen.

While being interviewed as part of an award ceremony in Seattle, Fauci quipped, “I created it,” as the room descended into a fit of laughter.

That’s right. Dr. Fauci, the man who has lorded over your life for years at this point, joked about creating what he has pretended is the most dangerous virus since the Spanish Flu.

Not only did he make the joke, but his interlocutor, Dr. Larry Corey, egged him on. “That’s right,” he said. “You let it loose … Okay. Gain of function, here we come.”

As an aside, it is quite humorous, in a dark way, that the man who may be America’s biggest drug pusher made a joke about cooking up a virus in his kitchen. Not just a virus, but a virus that could only be cured by the magical safe and effective vaccine that Fauci said over and over and over you must take in order to survive the CoronaDoom.

A vaccine so safe and effective the President Joe Biden is staring down the vile of another half-dozen doses so he can continue to be protected from the virus he keeps testing positive for.

If I were a psychologist, I might opine that Fauci’s repressed Catholic conscience was projecting itself in a shadow of humor. Reminds me of stories you hear about serial killers who keep visiting the scene of the crime or interacting with the family of the victim, almost as a way of playing a trick on the world without fully admitting what they have done.

I personally don’t believe that Fauci made the virus in his kitchen, but I think it is obvious at this point he worked hard to cook up a scheme to reshape American public health policy in his own image and likeness.

I wonder if he will start joking about beagle puppies too?

Of course, Fauci presented his pseudo-admission of being part of the creation of a virus as if it were untrue, but if he was fibbing, it would not be the first time he has done that publicly.

I give him as much credibility as can be expected considering how on the money he was about whether people should wear masks.

If Fauci is going to make a foray into comedy, maybe he can find a good opening act. If Hilary Clinton is running out of ways to stay relevant, maybe she can be his opening act.

A good “Epstein didn’t kill himself” bit should do the trick.