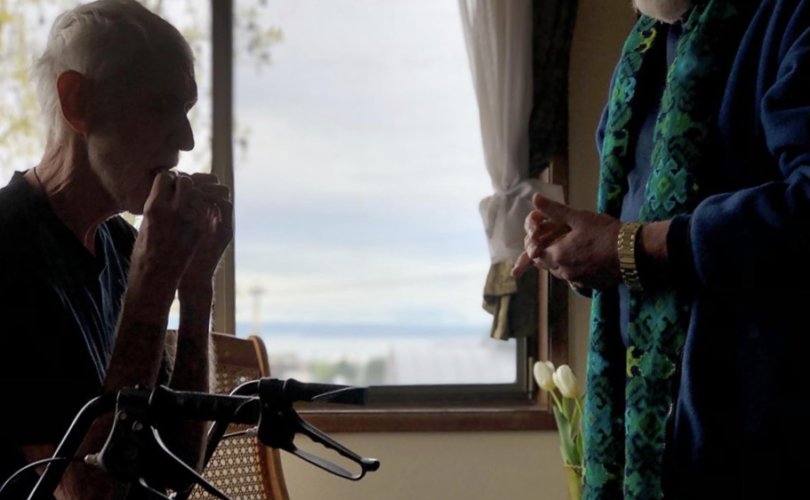 EDINBURGH, Scotland, August 30, 2019 (LifeSiteNews) ―  The other day someone asked me how I do my job without hating or resenting the people who commit the evil deeds in my stories.

I responded by saying that I focus on the evil, not on the people doing the evil. Evil rules people; people don’t rule evil. People do evil things because evil has taken the reins. Abortion is a perfect example of this. Abortion is clearly evil, but it is hard to say that the frightened or desperate woman who thinks it’s the answer to her problem is evil. It’s even hard to say that the abortionist or clinic worker who firmly believes he or she is helping that woman is evil. But abortion is evil nonetheless.

This is not to say I rise above all my stories on a cloud of peace. This week, I wrote about a story that was so utterly steeped in evil, and so potentially damaging to the innocent, that I burst into tears. I cried so hard, my husband rushed into the room to see what was wrong.

What was wrong was the ongoing story of Robert “Uncle Bob” Fuller, an elderly gay man who planned out his self-inflicted death in detail, got his Catholic parish involved, invited the mainstream media to take photos and videos, and got a Catholic bishop to sign off on his funeral.

Bob Fuller lived out loud, and he loved to surround himself with people. A professional nurse, he was very community-minded, and it is clear that many people liked and even loved him. He lost many friends during the AIDS crisis of the 1980s — one apparently through being euthanized by Bob — and by 1985 he too was HIV+. Nevertheless, his life was saved by new drugs for HIV, and he made it to his 70s before he got throat cancer.

Bob went through a round of chemotherapy, decided it was “killing his soul” and decided that he would follow his beloved grandmother’s example (she ended her life in the Merrimack River) by killing himself. He, however, would inject himself with euthanasia drugs after a splendid party.

Bob had many unorthodox beliefs, and he apparently saw no contradiction in receiving Holy Communion at St. Therese Catholic Church and writing nostalgically on Facebook about a homosexual summer romance. He belonged to the parish gospel choir, and his choir director told a reporter from the Associated Press that Bob had also served as a lector, amusing everyone by punctuating the scriptural texts with his ad-libs.

Bob loved St. Therese Catholic Church, but he did the priests who serve it a real unkindness by roping them into his death plans. Saying only that he was dying, Bob presented himself for a blessing at Sunday Mass on May 5, 2019. The Jesuit priest who was covering Mass for the pastor that day asked a party of children in their First Communion clothing and other parishioners to join him in the blessing. It was photographed and then published by AP.

Whether or not the Jesuit priest knew Bob planned to take his own life was a matter of fierce debate for three days. The optics were terrible. What kind of a priest would encourage little children on their First Communion Day to bless a suicide? The Archdiocese assured the public that the priest, the pastor, and the “parish leaders” did not know of Bob’s plans, but then a sharp-eyed reporter from CNA noticed that in March Bob had published on Facebook that his “pastor/sponsor” had given his plans “his blessings.”

“And he’s a Jesuit!!!” Bob exulted, as if that were still a sign of hard-headed orthodoxy.

Having written several unanswered emails in the hopes of exonerating the St. Therese Jesuit, I filed my updated story sadly and went to bed.

But in the morning I woke up to two emails that firmly stated that Fr. Quentin Dupont, SJ, had not known Bob’s intentions when he led the blessing at St. Teresa’s. One email asserted that the Jesuit priest hadn’t known Bob at all. Thus, I rushed to update the text of my story.

It seems that Fr. Dupont had been dragged by Bob into what seems to have been some sort of covering-all-bases spiritual insurance five days before his death.  But as for Dupont’s actual culpability, I checked and there are at least 26 other Jesuits in Seattle, any one of whom could technically have been the Jesuit who told Bob in March that self-murder was fine.

(By the way, Dupont has professed his innocence in America magazine: “I was absolutely, unequivocally unaware of Mr. Fuller’s intention.”)

But I also know, thanks to a gay British comedian, that sometimes people who consult Jesuits hear only what they want to hear. When Stephen K. Amos told Pope Francis he didn’t feel “welcome” as a gay man, the pontiff told him that anyone who privileged the adjective (i.e. gay) over the noun (i.e. man) lacked a human heart. Not a close listener, Amos told the cameras that the pontiff had said anyone who didn’t accept homosexuality lacked a human heart.

Thus, I am not convinced any Jesuit actually blessed Bob’s suicide plans.

I studied at a Jesuit theologate, and one of my most vivid memories was of a Jesuit professor of ethics telling us that the first question to ask in a moral dilemma is “Who is the weakest person in this situation?” He would be the first to point out that it was not actually Fr. Quentin Dupont, SJ, as embarrassing and unjust as his situation may be.

The weakest person in this situation is the sick, lonely and dying person who reads the AP story about Bob and decides that’s the kind of death he would like, too. And I can see the appeal because, from a worldly perspective, I thought it sounded great.

Bob’s suicide party went like this: He exchanged “marriage” vows with a handsome man about 20 years his junior, and then had a party with friends. He listened to a gospel choir and a soprano and then, after injecting his feeding tube with a mixture of drugs and Kalhua, died holding hands with his loved one as his friends stood before his bed singing “Amazing Grace.”

I’m not sure what happened to Bob next. Bob was convinced he was going to heaven, which he thought would be like “a state of mediation.” He clearly did not believe that hell was an option, even though the Roman Catholic faith of the church he was buried from has always taught that deliberately choosing suicide in cold blood is a mortal sin.

And you know, if hell is not an option, why shouldn’t we all have a suicide party to end our lives? If you remember the death of the cultured pagan Petronius in Quo Vadis, you’ll know what a very enjoyable and glamorous thing that can be.

But it’s the glamor of evil because deliberately murdering yourself is evil. Deciding you, not God, have the power of life and death is evil. Trying to grab the “crown” of heaven without embracing the “cross” sent by God is evil. Perhaps Bob was not evil. But I think he was ruled by evil, even if on Facebook he bragged “it’s me, Uncle Bob, who’s calling the shots.”