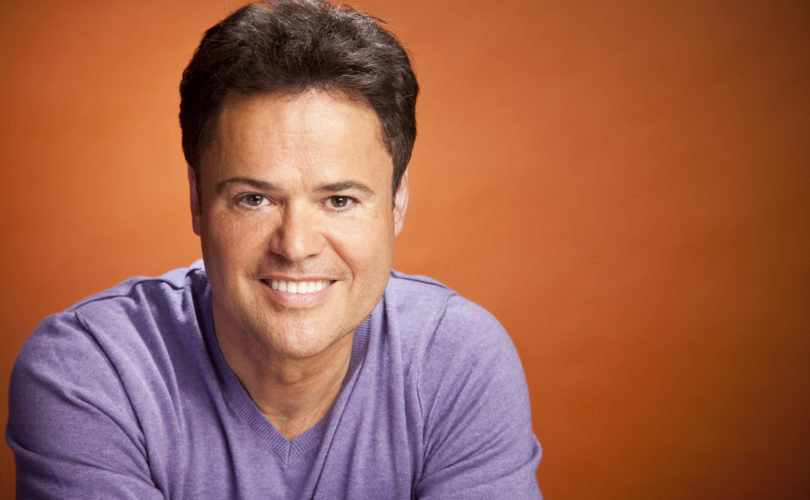 My little girlish heart goes a bit faster when I see his obvious intelligence and think of his courage, his loyalty, kindness and moral fortitude. What a guy!

I have a crush on Donny Osmond and I’m not the least embarrassed to admit it. At 56, what a handsome bloke! Much better looking now than when he was a drippy teenager. And so talented in music and showmanship in general. But mainly brave, and steadfast in holding to his moral convictions against a sea, nay, a tidal wave of pressure to abandon them. He resisted temptations that would have flattened nearly any of us, and he fought his way back, and has been happily ruling his corner of the pop/Broadway musical world since the late 80s.

Here is certainly a guy who refuses to be destroyed by the legendary fickleness of his industry.

In general, having been raised on the classical music of CBC radio, his kind of sparkly, plasticised televised pop culture never really did appeal to me much, and my well-educated family had nothing but scorn for it. Along with the Bee Gees and other pop-culture icons of the 70s, I don’t think the Osmonds’ name was ever mentioned in my family except with a disdainful and dismissive sniff. Besides, at that time, I was still busy having a crush on Captain Kirk.

So why has it taken me 40 years to catch up and have a little (dignified) bout of middle-aged, sighing admiration now?

In this 45-minute documentary, centered around a long interview with Piers Morgan, Donny, Donald Clark Osmond, the man, talks about the struggles of being Donny Osmond the teen idol, and then, with terrifying abruptness, becoming Donny Osmond the 25 year-old has-been wash-out, who was literally told that his name was “industry poison”… by no less a person than his friend Michael Jackson.

After years of being THE teen boy-king, with the millions of screaming teenage girl fans around the world, he was suddenly a joke. Indeed, I remember the girls in school mocking him (which was a pretty unattractive thing for them to do, come to think of it). He wasn’t just forgotten, as the video says, but hated. And I think it has taken me until now to understand, to see why that particular brand of sneering hatred seems so familiar.

I listened to this documentary this weekend while puttering about my flat, and it struck me that neither Piers nor Donny himself had completely understood why the public had rejected him so powerfully.

Piers: “There must be a part of a 14-year–old, good-looking boy seeing twenty thousand screaming girls, going, ‘I quite like this.’”

Donny: “…You’re on stage, 20,000 girls screaming your name and then you go to a hotel room and the silence is deafening.”

Piers: “The modern day pop star wouldn’t be in his hotel room on his own. There’d be half the screaming girls back in the room with him.”

Donny: “I married as a virgin. I really did [laughing]. And, I’m proud of it. It was difficult. Boy! let me tell you it was difficult! The hormones were raging…”

Piers: “Do you wish you’d just piled in back then, Donny?”

Donny Osmond, the idol of millions of girls, married at the age of 20, and she’s the same woman he’s happily married to today. They have five sons and six grandchildren.

I was too young to have caught any of the Donny Osmond mania, having reached the target audience age only after his famous career collapse. But I do remember it, and I think that date is significant. I turned 13 in 1979, by which time the Sexual Revolution, and all its cultural, social and psychological darkness, its glorification of misery and self-loathing, had fully descended on us. It should be no mystery why an act like the Osmonds fell out of favor.

I think Donny Osmond, with his whole family, represented something more than just silly teeny-bopper pop songs. They were sold as the “clean” pop act of their time, happy, innocent and cheerful. They made their name not only as a talented family act, but as one dedicated to the old fashioned religious-based virtues that had been hugely popular since the end of World War II. They were, in fact, the living embodiment of an innocent enjoyment of youth and, yes, I’ll say it, romantic love, that itself turned to “industry poison” at exactly that historical moment.

All we need for proof of this hypothesis is the suggestion of his publicist that he invent and spread a false rumour of drug-related trouble with the law, to “improve” his image and make him a saleable property again. And all we need to know about his character is that he rejected this absurd and awful suggestion, not only because it would be wrong, but because of the bad influence it might have on the young members of his family. If he was going to come back, it was going to have to be the honest way or no way at all.

At that time, the pop culture world was determined to immerse itself as deeply as it could into a completely new paradigm. Romance was no longer fashionable, whether teenaged “puppy love” or adult courtship. All anyone wanted now was sex, and that desire was quickly being mixed with a worship of death that was eventually to metastasize into what Pope John Paul II called the Culture of Death, where hedonism and sexual license was mixed liberally with nihilism, despair and gross, salivatory materialism. Everything, in short, that Donny Osmond himself had rejected.

The world in the early 80s wanted the Sex Pistols, New Wave and the sexual androgyny and moral ambivalence of David Bowie. This was my time as a teenager, and I remember the appeal quite well (and I’m listening to a playlist of 80s synthpop as I type this.) So here we are, 40 years on, and the western world is now reeling from the disasters of having embraced the sex n’ death culture. I still don’t really like Donny Osmond’s musical style much. I still like David Bowie and the Police.

But Donny the man, well… my little girlish heart goes a bit faster when I see his obvious intelligence and think of his courage, his loyalty, kindness and moral fortitude. What a guy!