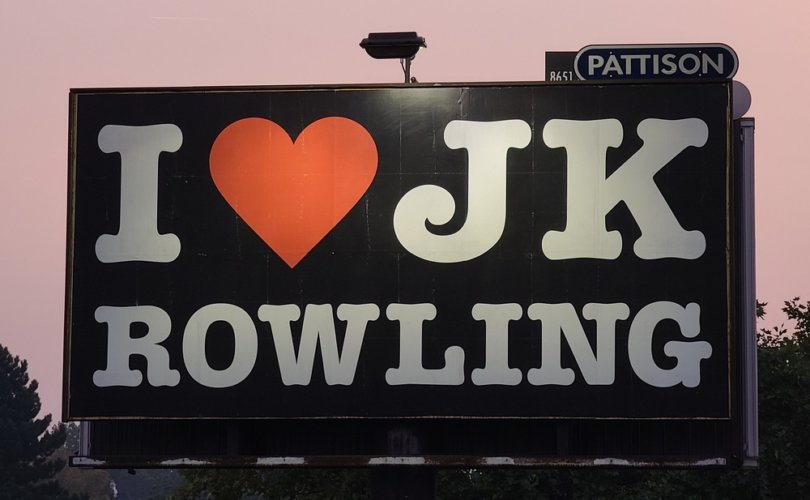 September 14, 2020 (LifeSiteNews) – If you want to know just how far the tentacles of the totalitarian trans movement can reach, consider what happened in Vancouver, Canada over the weekend.

Chris Elston, a fan of Harry Potter author J.K. Rowling, commissioned a billboard from Pattison Outdoor along with Amy Hamm with the simple slogan “I *heart* J.K. Rowling” in response to a poster with the same words being removed by Network Rail in Scotland. Elston and Hamm had a three-month contract for the billboard.

Elston told Global News that Rowling has been targeted unfairly for her views on transgenderism recently (something I and others have covered extensively for LifeSiteNews.com). “A woman that has done nothing but express concern for an erosion of women’s rights and medicalization of children who are being taught gender ideology [is being targeted],” he told Global. “She has gone into great detail about all the safeguarding issues that are being taken away from women and children.”

Within less than two days of the billboard going up at the intersection of East Hastings and Glen Drive, it was promptly vandalized with paint—and then taken down entirely in the face of instant backlash from the LGBT community. Councillor Sarah Kirby-Yung of the Vancouver Non-Partisan Association claimed that the slogan was actually hate speech.

“By saying, ‘I love J.K. Rowling,’ who has clearly been associated with denouncing the trans community, the intent was really clear here to be an anti-message against inclusivity and against the trans community,” Kirby-Yung noted somewhat incoherently. “As a city councillor, when I see that I just feel we have such a responsibility to call that out and stand up against that kind of divisive behavior. It’s very difficult to take that back once those wounds have been inflicted.”

In her statement to CTV News, Kirby-Yung was blunter: “I think it's intentionally intended to incite hate without officially contravening . . . guidelines of hate speech. But the clear intent is to stoke division and be exclusive of people in our city.”

To be clear: This city councillor is, in fact, claiming that a billboard reading “I love J.K. Rowling” is capable of “inflicting wounds.” So much for the resilience of the trans community.

Global News even tracked down another Vancouver resident to concur with Kirby-Yung. “Having a bold sign like that in a busy street…it really sends a message, where as a queer individual it is a bit hurtful to see something that could be unwelcoming.”

Trans activist Sophia Banks went even further. “Let me explain something as a trans woman about this billboard in Vancouver,” he stated on Twitter. “This message is calling me (a trans woman) a dangerous predator who should be denied access to women’s spaces. It encourages male violence against us. It encourages child abuse.”

You may need a reminder at this point that the billboard in question says “I love J.K. Rowling.” Inside that statement, apparently, is a call for violence, child abuse, and reference to trans people as violent predators. Incidentally, Rowling has said none of that and is actually a long-time supporter of the LGBT agenda.

Vancouver photographer Antonia Allan created a petition to have the billboard removed, and told the CBC that she was “horrified” by the billboard, which “has the insidiousness of looking truly innocent but when it comes down to it, the support for J.K. Rowling is support for anti-trans feminism.”

Trans activist Morgane Oger, a former candidate for the B.C. New Democratic Party, concurred: “People have been using innocuous-looking signs of messaging in order to intimidate or in order to provoke people into reacting for too long and this is another one of these signs. The purpose of this sign was to harass the community, targeting them because of who they are and trying to get them to react through a message only they recognize.”

So there you have it. J.K. Rowling, a pro-abortion, pro-LGBT rights progressive whose works can be found in nearly every Vancouver bookstore is now such a leprous pariah that a billboard simply declaring affection for her is now quite literally a declaration of war on transgender people and can be labeled hate speech and an incitement to violence. Pattison Outdoor took the billboard down without explanation.

What does all of this mean for freedom of speech? I think we know. If supporting an author who has as much contempt for the views of traditional Christians as any LGBT activist is now beyond the pale, we can be assured that these same activists would be more than happy to shut down churches, burn books, and restrict any and all dissenting opinions in the name of protecting people from violence at the very earliest opportunity. And considering how fast this billboard came down, those opportunities may come earlier than we think.

As Chris Elston said about his short-lived billboard: “We live in a society today where you cannot even ask the question.”