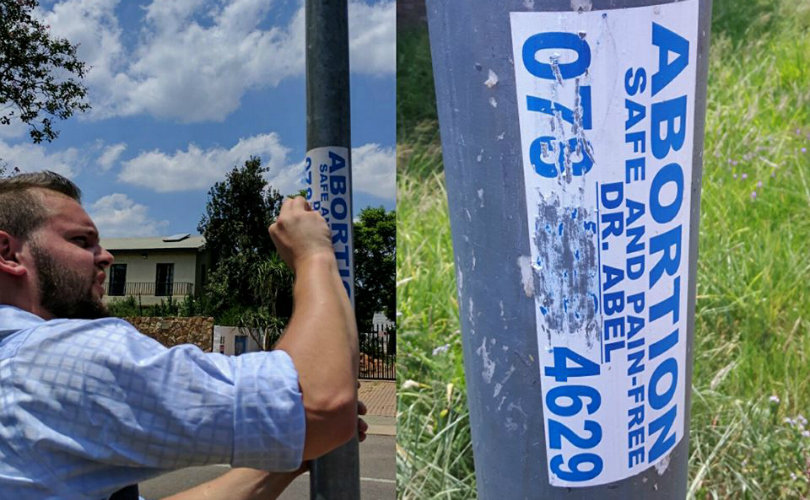 Jan. 3, 2017 (LifeSiteNews) – It was in South Africa, walking through an upper-middle class neighborhood in Pretoria, that the word jumped out at me. “ABORTION,” a white and blue sticker plastered to a signpost blared in all capital letters, “SAFE AND PAINLESS.”

Safe and painless for who, exactly? This glib lie was followed by the phone number of a Dr. Abel. And that was just the first sticker—a little further down the street was another, and then another. I counted over a dozen in just a twenty-minute walk. “Mama Karebo” was available to relieve you of your mamahood if you just called her number. Dr. Mark promised to give girls a safe abortion that very “SAME DAY.” I spent some time scratching out the phone numbers, hoping the abortion cartel of Abel, Karebo, and Mark wouldn’t be getting calls from this neighborhood anytime soon.

After spending a couple of weeks in Tanzania, my wife Charmaine and I had just been discussing how clean and modern and efficient South Africa was. But for some reason, the killing of pre-born children in the womb so often seems to comes hand-in-hand with “progress.” In Tanzania, the people we spoke with said that abortion happened, but rarely. “When someone throws baby in trash, the news cameras come,” one young father told me. “It is big story.” The abortionists who work to reduce the babies to bloody garbage can go to prison if they get caught. But in South Africa, the butchers were advertising their services on lamp posts and road signs. They have not yet adopted Western subtlety, either: You would never see a sign advertising “ABORTON” in Canada or the United States. We are far too civilized to call something so distasteful by its real name. We prefer to talk about “reproductive choice” and “women’s healthcare.”

Seeing those advertisements was a real contrast. In the last several weeks, I’ve had the opportunity to witness the majesty of God’s Creation like I’ve never seen it before. The Great Migration in the Serengeti, the teeming herds of the Ngorogoro Crater, the dolphins off the Zanzibar coast, and the Colobus monkeys of the Jozani Rainforest—the scenes have been breathtaking. And everywhere you look, parents are protecting their young. Elephants nudging their calves closer to their sides. Lionesses ensuring that tumbling lion cubs are staying nearby. Zebras keeping a vigilant eye on the surrounding grasslands as their young frolic along behind them. Colobus monkeys snatching their roughhousing babies from branches to clutch them to their chests at the first sign of intruders. This instinctive love and protectiveness for their offspring—with a few anomalies—dominates life in the animal kingdom.

And then there are people. Forty-two million times a year world-wide, we kill our own sons or daughters while they are still blissfully unaware, developing in what should be the safest place on earth—under their mothers’ hearts. We get so used to hearing about abortion that sometimes we forget just how radical, and how bizarre, and how unnatural abortion is. Think about it for a moment—women are hiring strangers to use tools to force their way into their uteruses, and then use what are basically vacuum cleaner hoses and medical pliers to pull, pulverize, and pry their babies from their bodies. This is not healthcare. This is genocide by suicide.

Let me draw a comparison to really drive this point home. Suppose scientists discovered a species of bird that, upon finding out that their eggs contained little baby birds, were thrown into a panic. This is disagreeable, as they want to be empty-nesters right off the bat. And so they hire a woodpecker to fly on over and use his razor-sharp beak to hammer holes through the eggs until they can be assured that the bodies and heads of the baby birds within have been sufficiently perforated and their babies will not be hatched alive.

You might be thinking that this comparison is ridiculous, and you would be right. To imagine such a fantastical scenario stretches even our imaginations because it defies all basic instincts. And yet, people living in the West with the highest standard of living in all of human history can look around their condo and decide that there’s no room for a baby. We’ll just go to the clinic and drop it off in the garbage, darling. It can be done the very same day, safe and painless. Dr. Abel can take care of it. Or was that Cain? Never mind. Doesn’t matter.

Let me lay out another scenario. Suppose it turned out that lion prides, finding that the consistent arrival of lion cubs is really beginning to cramp their lifestyles and travel plans across the Serengeti, were in the practice of belly-flopping onto rock piles in order to induce miscarriage. Or were allowing baboons to pry open the cervixes of pregnant lionesses and use curved sticks to hook the unwanted cubs by the eyeholes and drag them out to die in the sun. What would scientists think? An easy question to answer: They would think that something was dreadfully wrong, because something would be dreadfully wrong. A species that regularly facilitates the killing of its own offspring—the Darwinian instinct towards reproduction in reverse! They would soon discover that evolution cannot explain such thing. Only Evil can.

Evil is real, and it is evil that has caused the sons of Adam and the daughters of Eve to often sink below the level of the beasts in what they do to one another. We do things to our own children that would cause the angelic tunes catch in the throats of the songbirds, and would make the animals, were they capable of reason, stare at us in shock and bewilderment. What we are doing to our sons and daughters defies reason, defies love, defies beauty, and defies God. All this we can learn this simply by watching the animals He created care for their own babies.