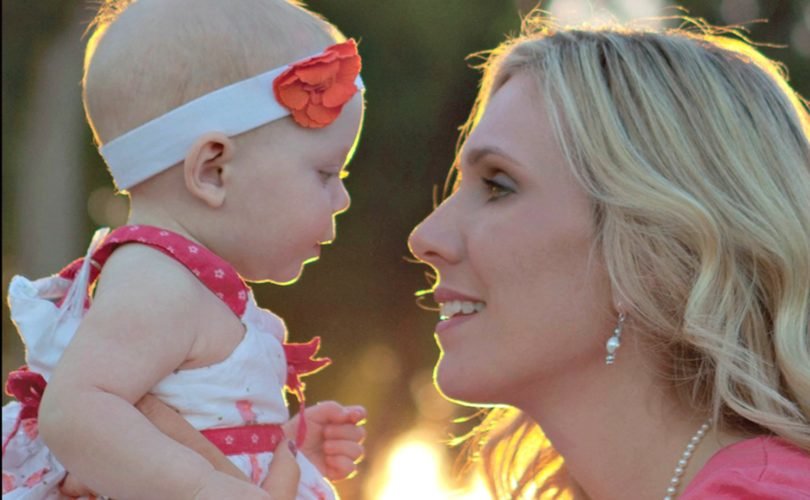 That was the day I decided I had to be a voice for those who could not speak for themselves, the unborn.Photo: Me and my daughter

I saw it depicted on a screen in my 8th grade Catholic school classroom before I had ever even heard the word abortion.

After my teacher played the video The Silent Scream, which showed a live abortion, I sat there shocked and angry. I went home and asked my mother, “How can abortion be allowed in this free country of America? Don’t those babies deserve their lives?’ Even in my innocence, I understood the simplicity.

My mother saw my angry passion and made a suggestion that would allow me to put my passion into action. She said, “Let’s go to a clinic where abortions take place and stand outside and pray for the women going in and the babies who will lose their lives.” That was the day I decided I had to be a voice for those who could not speak for themselves, the unborn.

He came out with his head down, and I asked him what happened. He shared in a somber tone, “I tried to show her. She wouldn’t look; she wouldn’t listen and she won’t leave. What do I do? How do I save my child?” There was a desperation in his eyes that I will never forget.

I saw the evidence of abortion because a school mom brought the video to the principal and challenged the school staff to show our middle school classes the evidence of this atrocity. I applaud that mother and all who are brave enough to have the uncomfortable conversations that allow for others to be educated with the truth and facts of abortion.

When I speak on abortion at schools, I will often get opposition to showing the visual reality of it. Schools, even some of the private ones, want me to share information about abortion, but will often get nervous about showing the images. Then I share how I saw them when I was in the 8th grade. It was the images that I will never forget. It was the images that empowered me to stand up for life.

Every high school history book shows the gross and graphic images of the Holocaust. Why? Because it is the visual people need to see. When they see the horror of what happened, those are the images they cannot forget. It is those pictures of atrocity we see that inspire us not to make the same mistakes again.

I have talked to many pro-abortion advocates who have never seen pictures of what abortion really does to an unborn child. This is concerning. How can one stand for something that they have never taken the time to fully investigate?

For some conversations and talks I use non-graphic images, but for others I need graphic images to illustrate my point. For example, one day when I was in my 20’s, I was praying in front of a Planned Parenthood and a young man in his 20’s walked his girlfriend into the clinic and then came out for a smoke. I asked him if we could talk. He came over to me and I asked him why he and his girlfriend were choosing abortion. He shared that they had a baby seven months ago and weren’t ready for another child. I asked him if he planned to marry this girl. He said, “No way; I’m not marrying her; that’s why I want her to have an abortion.” I said, “What about adoption?” He replied, “I don’t want my child to be out there suffering in the world.” I responded, “So, you would rather have your child’s body be dismembered within your girlfriend’s womb, than give your child a chance at life because maybe he/she may suffer if adopted.” He quickly insisted, “Oh no, at this stage, it’s not a baby yet.”

That was the moment I realized then that no mother brought the evidence to his 8th grade classroom and demanded the administration show him the truth about what an abortion does to an unborn human being.

I said sadly, “You have been misinformed. Your baby has a heartbeat, lungs, arms and legs and looks like a small baby.” He looked at me in honest disbelief and from my back pocket I took out images and showed him non-graphic pictures of human life so he could see what his baby looked like at the stage he/she was. Then I pulled out another set of graphic images to show him what the abortion procedure would do to his child. He had a look of utter shock and horror on his face and then looked at me and said, “I have to go get my girlfriend. I have to go save my baby!”

He grabbed the graphic images out of my hand and went into Planned Parenthood’s front doors to show his girlfriend. Later, he came out with his head down, and I asked him what happened. He shared in a somber tone, “I tried to show her. She wouldn’t look; she wouldn’t listen and she won’t leave. What do I do? How do I save my child?” There was a desperation in his eyes that I will never forget. I told him to keep trying to go in there and talk to her and that I would be outside praying for her to change her mind.

His heart was broken. He and his girlfriend made a grave decision without enough accurate information to make an informed decision. Why is the pro-choice movement afraid of revealing the evidence of what abortion is? Is it because people may do exactly what this man did—change his mind? I have never forgotten that young man. I had to leave before his girlfriend came out, but I don’t think she changed her mind. He became the father of a dead child that day; one he never knew was a real human being because the pro-choice movement has tried to hide the evidence of abortion through colloquialisms and deception.

Even pro-choice feminist Naomi Wolf challenged her own group when she wrote in Our Bodies, Our Souls in 1996, saying “The pro-choice movement often treats with contempt the pro-lifers’ practice of holding up to our faces their disturbing graphics….[But] how can we charge that it is vile and repulsive for pro-lifers to brandish vile and repulsive images if the images are real? To insist that truth is in poor taste is the very height of hypocrisy. Besides, if these images are often the facts of the matter, and if we then claim that it is offensive for pro-choice women to be confronted by them, then we are making a judgment that women are too inherently weak to face a truth about which they have to make a grave decision. This view is unworthy of feminism.”

Dr. Bernard Nathanson, the man who made the video I saw in the eighth grade, was one of the most prolific abortion doctors this country has ever known. He presided over 60,000 abortions including one of his own children. What changed his mind? It was the invention of ultrasound imaging. The visual evidence made it clear this choice involved killing a human being. With this new discovery, he could no longer be involved in performing abortions. He then became one of the most prolific and outspoken pro-life advocates, going so far as to produce The Silent Scream to inform people that the choice of abortion entails killing a live baby.

I must say ‘thank you’ to him and to the mother who advocated that my junior high class was mature enough to see the evidence of a decision some of us would inevitably face in our futures. It’s amazing to think of the lives changed in that classroom that day as we viewed the evidence. Some of us walked away dedicating our lives to helping protect the unborn. Others, I imagine, made choices that would not put them in a position to ever need an abortion. And some of the students viewing alongside me may have even found themselves pregnant and chose life for their child because they remembered that abortion would leave them a father or a mother of a dead child.

Abortion is an unnecessary tragedy; one that could be stopped if more of this so-called “choice” was informed.