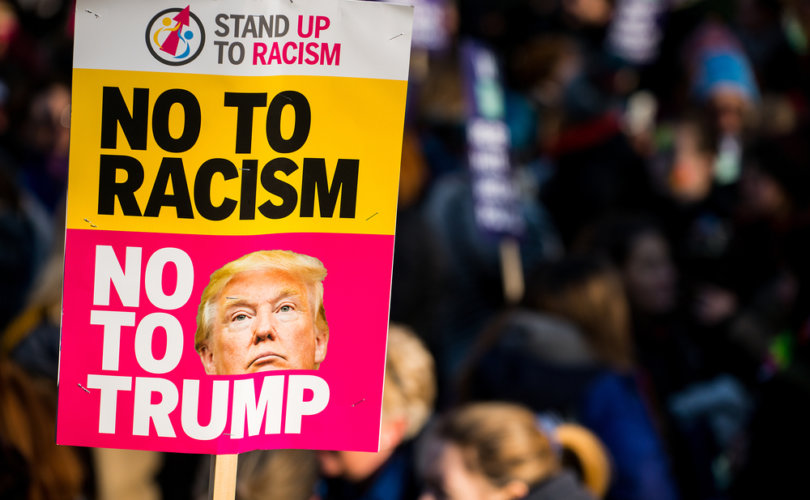 Jan. 31, 2017 (LifeSiteNews) – For the last couple of weeks, everyone has been going insane. I have never seen this level of hysteria, hyperbolic rhetoric, and fearmongering, not even when the Left collectively decided that George W. Bush was worse than Hitler.

It appears that the progressive movement has decided that a former New York liberal is the embodiment of pure evil and represents everything that must be opposed, however incoherently. Some of the critiques are warranted, but all of them, so far, have been hypocritical—especially considering that the other option for president of the United States was Hillary Rodham Clinton.

I was no Trump fan, but now that Trump is president, I take the same approach as Ben Shapiro and the National Review: Support the president when we can support him, and criticize him when we can’t. In other words, treat him like a flawed politician. The Left, however, is treating him like an invading demon that they must exorcise, and have completely lost their ability to see things objectively.

Consider just a few of the recent accusations being leveled at Trump:

Donald Trump is a fascist murdering America’s freedom because of his temporary travel ban from seven countries with a track record of producing jihadists, which he implemented in order to improve vetting processes. For the record, I don’t even have a strong opinion on this issue one way or the other. But what I do know is that Barack Obama suspended immigration from Iraq for six months, and nobody made a peep. Worse, one of Obama’s last acts before leaving office was ending America’s longstanding policy of granting asylum to Cuban refugees who arrive without a visa. Where was the outrage then for people fleeing a dictatorship, many with family members in Florida? Nobody cared.

Donald Trump is a “Russian puppet” because sources claim that Russian hackers may have been Julian Assange’s source for the leak of Democrat emails, regardless of the fact that the leaks merely showed the American people what politicos like John Podesta really thought. On the other hand, the Clinton Foundation could receive millions upon millions of dollars from countries specializing in human rights abuses—and nobody saw a problem. Evidently it’s alright to run a pay-to-play scheme—as long as you play for the right side.

Donald Trump is a misogynist pig because of his treatment of women in the past, and this means that The Patriarchy has returned. Now, I will be the first to say—and have written this many times throughout the election—that Trump is guilty as charged. His behavior has been that of a misogynist pig for decades. But the hysteria is a little hard to handle considering that the other option for president was a woman who enabled Bill Clinton, alleged rapist, serial sexual harasser, and predator who used a White House intern 27 years his junior for sex. Hillary, in fact, was in charge of suppressing what they called “bimbo eruptions” during the 1992 campaign, working to destroy the reputations of any woman who stepped forward to complain about Bill.

And the grievances go on and on. The Republicans obstructed Merrick Garland’s confirmation as Supreme Court justice, says the Left, and this was a travesty. They conveniently ignore the fact that the Democrats began the tradition of using the Court as an ideological cudgel when they smeared and slandered Robert Bork and tried to do the same to Clarence Thomas. They are wild with indignation at Trump’s use of executive orders, even though Barack Obama gave up on legislating long ago and passed nearly his entire agenda by fiat. In every instance, it is not what Donald Trump is doing that spawns the outrage, it is the fact that they have lost power. It’s not the methods he is utilizing, it is the fact that they disagree with his agenda.

The Left always uses the politics of demonization in order to silence and marginalize their opponents, and they are used to controlling the levers of power. The cultural troika of film, television, and music nearly always pronounces the same judgements and roots for progressive causes. The media has been in the bag for a long time, and abandoned all pretence of neutrality in the waning days of the campaign. And for nearly a decade, the progressives had Barack Obama in the White House, lighting up the grounds with the rainbow, hugging Cecile Richards, and using pre-existing legislation to force the biologically illiterate concept of “gender identity” into America’s schools. With Trump’s arrival, they have found that their exaggerated sense of self-righteousness does not entitle them to anything in a democracy. They gave up making arguments quite some time ago, and instead spent their time lecturing the rest of us sanctimoniously. People got tired of it, and took their power away.

It is ironic that while claims of Trump’s “fascism” run wild through the corridors of the Internet, it is actually the Left that is threatening democracy. It is the Left, after all, that is claiming the election was “stolen” from them. It is the Left that wants to reorganize the American political system (getting rid of the Electoral College) to ensure that it wins presidential elections. It is the Left that is claiming a democratically elected president is not the “legitimate” president simply because they disagree with his agenda and viscerally hate him. The dreadful Keith Olbermann went so far as to tell Bill Maher that America did not have an election: “We were invaded, is what it boils down to.”

Surely people can see that this neurotic seizure the Left is undergoing is not helpful. I was no Trump fan, but now that Trump is president, I take the same approach as Ben Shapiro and the National Review: Support the president when we can support him, and criticize him when we can’t. In other words, treat him like a flawed politician. The Left, however, is treating him like an invading demon that they must exorcise, and have completely lost their ability to see things objectively. Thus, a “temporary travel ban” becomes a “Muslim ban,” cabinet appointees with military experience become a “junta,” and the use of Obama tactics becomes “fascism.”

The Left has lost power, and it is panicking.

The next four years are going to be a street fight. The Left has caricatured Trump as some grotesque dictator, and the shouting is now so loud it is almost impossible for facts to pierce the din. The Second American Civil War is underway, and the fault lines could not possibly be more defined: The brazen hypocrisy of the Left combined with their swooning hysteria have revealed that they have lost their ability to see those they disagree with in political terms.