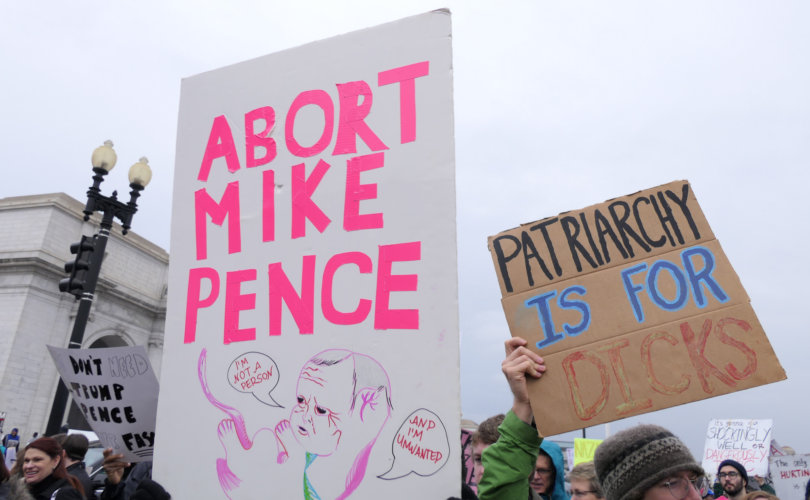 WASHINGTON, D.C., January 23, 2017 (LifeSiteNews) – “P***y power!” the two women cheered as I took their photo. They were eager to pose in front of the “phallic” Washington Monument as a tide of people walked several miles to get to the Women’s March on Washington.

Not wanting to miss a massive pro-abortion gathering on the eve of the 44th anniversary of Roe v. Wade, three pro-life activists and I went into the heart of the feminist anti-Trump march on Saturday.

What we saw broke my heart and strengthened my resolve to end abortion, the greatest human rights injustice of our time.

First, there were the “pussy hats.” These pink knit hats with two small, pointy ears are part of a project launched over Thanksgiving weekend in support of “women’s rights.” Feminists are obsessed with cats, and then there’s the whole female anatomy/Donald Trump double entendre.

Then, there were the signs. It was hard to find any without profanity. They featured sparkly uteruses, the Virgin Mary as female genitals, and frequently made use of the word “p****.” A lot of the signs just said, “f*** Trump.”

And the children. Parents apparently saw nothing wrong with putting “pussy hats” on their elementary school-age daughters and bringing their kids to a march where images of sex acts and sexual assault were plastered on signs about the president.

The march seemed to be primarily pro-abortion rather than pro-transgender. It was a celebration of the sexual revolution, procreation-free sex, and abortion.

Many of the signs implied that all women have uteruses, an assumption the transgender lobby vehemently fights.

The march was disorganized and chaotic; few people were following the official route.

There was an overwhelming lack of joy at the women’s march – just anger and sadness. But the women who marched aren’t our enemies. They deserve to be shown the love, compassion, and mercy that are the hallmarks of the pro-life movement. They are all potential converts to the pro-life worldview. Many of them have no doubt been harmed by abortion.

The fact that hundreds of thousands of people were willing to rally for abortion the day after a pro-life president was sworn into office shows how ready pro-lifers need to be for bitter battles ahead over the Supreme Court, defunding Planned Parenthood, and laws protecting pre-born children.

Women are so much more than the sum of our body parts. Can the “feminist” movement really only offer our daughters such a narrow-minded view of what it means to be a woman?

If modern feminism means complaining about the objectification of women while dressing as female genitalia, believing women are “oppressed” without the right to kill a defenseless human being, and thinking that women aren’t empowered unless the government provides us with free cancer-causing contraceptives, count me out.