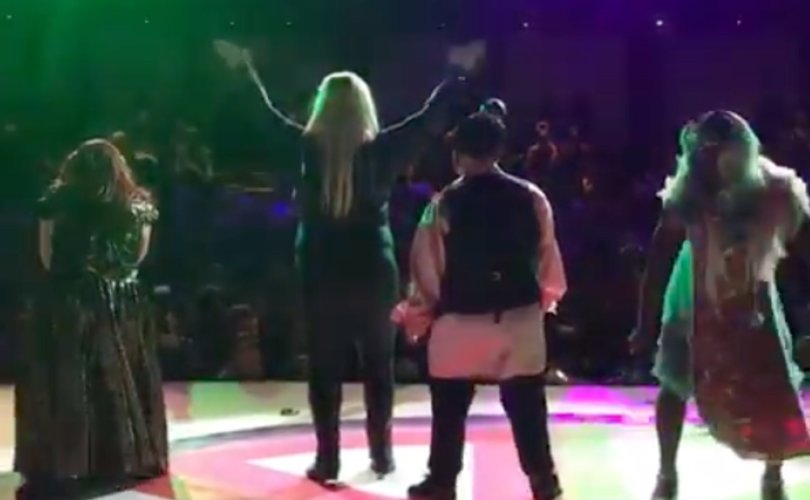 To see more photos of the protest outside the performance, click here to visit LifeSite's Facebook photo album.

Normally I’d never put myself in such a spiritually toxic environment. But I wanted to do my due diligence so my reporting on it would be accurate. I asked my guardian angel for protection and some of the Christian protestors outside the event were kind enough to pray that God would keep me safe. So I went in.

The show took place at Wealthy Street Theatre in Grand Rapids, Michigan — the city I grew up in and where I currently reside. It featured persons with Down syndrome from a U.K. drag troupe called “Drag Syndrome.” It also had non-Down syndrome performers.

The event quite justifiably garnered international headlines. Local media was abuzz too. But none of the press mentioned the verbal abuse some of the pro-LGBT folks who attended the performance hurled at the protestors outside — f-bombs, middle fingers, “Jesus freaks!” You name it. Hardly displays of tolerance, if you ask me.

Given that West Michigan is one of the state’s most religiously conservative areas, the decision to host the event there seems pretty obvious. Event organizers clearly wanted to kick sand in the eyes of the larger Christian community while helping along the normalization process of the LGBT agenda. It’s a classic Alinskyite tactic. And it’s clear Grand Rapids is a target on their list of places they want to further impose their perverted ideology.

Who hosted it and why?

“Drag Syndrome” was held on Saturday and Sunday night as part of ArtPrize, an annual art competition/festival created and run by Rick DeVos, son of the current U.S. Secretary of Education Betsy DeVos.

The DeVos family are huge Republican donors who practically own Grand Rapids. Members of the Christian Reformed Church in America, they have their name plastered over dozens of buildings in the area. To say they are influential power brokers in local politics would be putting it mildly.

You’d think that the family’s conservative religious views would compel Rick DeVos to scrap the show himself. Apparently not. My best guess is that he knew about it and simply let it happen out of fear of being labeled transphobic or whatever the latest term the left throws around these days at people who believe there are two genders. Of course, I could be wrong. Worst case scenario, he actually supports down syndrome men dressing up in women’s clothes and gyrating on stage.

Thankfully, Republican congressional candidate Peter Meijer, who hails from another well-to-do West Michigan family, canceled the event from being held at one of his properties, forcing it to be moved to Wealthy Theatre. He said publicly that the performance was “exploitive.” Good on Peter for doing what was right.

What Christ must have felt like on the cross

When I arrived Saturday night for the 7 pm show I was astonished by the level of hatred supporters of the event had for the nonviolent, peaceful, two dozen or so protestors standing outside, almost all of whom were from local Christian churches. It literally felt like demonic posession was everywhere.

Within seconds of arriving, I witnessed the co-host of the event, “Dice Santana,” a non-Down syndrome African American who, from what I've gathered, is a woman who sadly mutilated herself to become what she believes is a man, lecture the protestors about how they weren’t supporting “love” and how they weren’t being Christ-like.

Most of them remained silent, taking the hatred head on and letting their mere presence do the speaking. Some calmly responded to the seething anger spewed their way. The difference in temperament was obvious. Margaret, one of the protestors, told me that while she was on the receiving end of “Dice’s” tirade, she simply kept her eyes fixed on a statue of the Blessed Virgin Mary that was in the window of a shop across the street. She said she found comfort in that.

What I wanted to ask “Dice” and her furious friends was: how do you define “love”? What is so “loving” about encouraging persons to sin? My guess is she and liberals like her think love is simply accepting people “as they are” and “letting them express themselves.” Such an understanding of “love” really is diabolical. Civilization would crumble to pieces if we actually implemented that way of thinking on any number of issues. Sadly, America is in fact going down that road at a suicidal rate, and Christians are being told to shut up and like it.

As “Dice” was busy virtue signaling, I couldn’t help but think that she probably wouldn’t be as aggressive as she was if a group of Muslim women wearing hijabs or Jewish rabbis wearing yarmulkes were protesting outside. It’s always for followers of Christ that liberals reserve their most intense vitriol.

A den of iniquity

Inside the theatre, a “Content Warning” sign was taped on the wall. I laughed out loud when I saw it. It absurdly read, “PG-13: Adult Language.” Really, “adult language”? That’s what makes this event “PG-13”?! That’s what you are warning about?! Not the disturbing fact that grown men in dresses are prancing around like animals?

Fortunately, less than a dozen children were there to witness the Saturday performance, which seemed to take on a religious, almost liturgical experience for those who went. I felt terrible for the kids who were brought there by their parents. Child protective services should be called on every one of them. Sadly, that won’t happen in this day and age. Kids are now allowed to get hormone injections and “transition” all before puberty.

The show began with non-Down syndrome men wearing high heels, exotic costumes, and tons of makeup while lip-syncing songs they didn’t write. In other words, the entire thing was, to quote Holden Caulfield from The Catcher in the Rye, “phony.”

The production really is just one big fantasy for these people, who are obviously emotionally hurting. It’s all very sad. The Down syndrome performers, featured during the latter part of the show, almost made me cry. How exploitive, how terrible the event organizers are for doing this. If they are making money off this, even worse. I bet the same people in the audience cheering on these innocent persons would also be cheering on the mothers getting abortions because their unborn child had downs syndrome.

As the show pressed on, I kept wondering how these performers got to this place in their life. The answer, I think, probably has to do with some sort of family abuse (likely by their father). Bullying in their teenage years, drug, possibly sexual abuse, and/or sin in general are also likely explanations. Liberal parents projecting onto them their own tendencies probably had something to do with it too.

I also wondered to what extent the Church could be blamed in that it failed to help these people when they were younger. How much, in other words, did the Church's failure to preach the Gospel fully and not uphold the truths of the Christian faith result in these souls falling through the cracks and into the world? Only God knows.

Fighting back for Christ the King

The good news is that Christians are not letting this filth go un-noticed. I was pleased to see a decent number of men protesting the event. Nothing against women, who tend to be more involved in protesting these sorts of events, but there needs to be strong, male voices leading the fight on this and many other culture war issues. Simply put, society needs masculinity.

Tom Root of Flint, Michigan, which is about 2 hours away from Grand Rapids, was a particularly inspiring figure at the protest. Tom has a Down syndrome child. I could tell how sad he was when a woman with her lip-stick wearing son at her side confronted him. But he patiently spoke truth with charity to her and ably dismissed her flimsy arguments.

Many of the other protestors had Down syndrome children in their families too, which is why I laughed at the ridiculous arguments proponents of the show were using in their questioning of them. “Do you even know a person with Down syndrome?” was one of the more popular questions. “It’s just art,” “You are being judgmental” and “You’re an ableist!” were others frequently used.

I’m curious about whether supporters of the “Drag Syndrome” event have close friends who are faithful Christians. I can't imagine they do. But who cares anyway? Familiarity doesn’t entitle you to speak on an issue. Ideas do. If you have cancer, would you only allow a doctor who also had cancer to operate on you? Leftists who claim to be neutral and tolerant seem to forget they are being quite intolerant and “judgmental” of Christianity. Do they even realize they have concocted for themselves a pseudo, humanistic religion that virulently discriminates against and seeks to coerce those who disagree with it?

I predict Down syndrome drag shows will grow in popularity in the years ahead, just as drag queen story hours have been popping up all over the place. The left will continue to use these performances as a wedge in an attempt to make pro-family Christians appear un-charitable to the mentally challenged. They tried a similar tactic a few years back when they asked Republicans running for president what they would do if their son or daughter admitted to being same-sex attracted.

Christians need to take a stand against these lurid performances and ensure the common good of society is upheld. Sure, let’s all live by Ezekiel 33:9, which says that if we do not warn wicked men about their sins God will hold us accountable for their ways. But let’s also take an active role in crafting and passing laws that ban these events in the first place. Not only are they an offense to the natural law but they violate the divine law in a particularly egregious way. God will not be mocked. Christians need to stand up for His honor and His dignity, come what may. If not us, who? If not now, when?