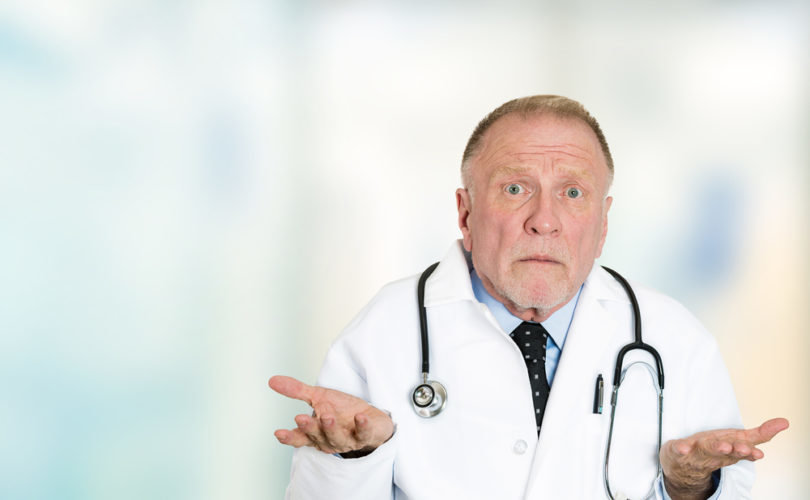 Dear doctor: You may have been trained to believe in science. But that's all changed now. We believe in the Supremacy of Feelings, and if you don't agree, you're a bigot.Shutterstock

Being a Christian in today’s culture is starting to feel a bit like being the only sober person at the party.

Consider this news story, published yesterday by the National Post:

After successfully lobbying provincial and federal governments to make it easier to amend sex designations on key identity documents, transgender Canadians are now pushing for another change: to abolish gender references altogether from birth certificates.

The B.C. Human Rights Tribunal has agreed to review complaints filed by the Trans Alliance Society and a handful of transgender and intersex individuals, who argue that doctors should stop assigning the sex of a baby based on a quick inspection of the baby’s genitals at birth when there’s a possibility they may identify under a different gender, or no gender, years later.

“Birth certificates (may) give false information about people and characterize them in a way that is actually wrong, that assumes to be right, and causes people … actual harm,” said Morgane Oger, a transgender woman in Vancouver and chair of the society.

“It’s considered true and infallible when it isn’t.”

Putting aside the irony of Ms. Oger’s use of words like “true” and “infallible” in defence of a worldview where no such concepts exist, it seems we’re now so far down the rabbit hole that we are expected to accept that each and every person can live his or her (forgive the transphobia) life in whichever reality they decide to conjure up.

And we are supposed to accept these realities with the straightest of faces, lest the wrath of the gender ideologues accuse us of phobias and pathologies that they’ve only just invented. Injustice against those who believe the body they live in doesn’t reflect their gender runs so deeply, we’re solemnly informed, that even doctors correctly identifying the presence of penises and vaginas in newborn babies is indicative of our bigotry.

This is the case being made by Vancouver lawyer barbara findlay, who spells her name in all lower case due to the fact that grammar, presumably, is another hateful social structure to be cast aside in our battle for freedom. The current system of identifying males and females, says barbara, “means that children are raised ‘as’ the birth-assigned gender, which is a crazy-making experience. Instead of living in a social reality that recognizes that gender develops, and does not exist at birth, those children have nothing to work with except that something feels profoundly wrong.”

Once upon a time, the job of psychologists and psychiatrists was to identify in people the chasm between reality and fantasy and then attempt to bridge that divide. If the way people saw the world defied physical reality, it was necessary that this be remedied in some way. No more.

The irony is that the same people who claim that there are no such things as intrinsically feminine or masculine characteristics, are simultaneously appealing to these very characteristics to overrule the physical presence of genitalia in making the case that some girls are, in reality, boys and that some boys are, in fact, girls.

The gender ideologues face other contradictions, too. The same people who claim that university campuses are infected with a rape culture overrun with men who are nefarious rapists-at-heart are also demanding that men be allowed to access female bathrooms on the flimsy premise that they say they believe they are women. Comedies once depicted men dressing up as women to sneak a peak in the girl’s change room. They no longer need to do any sneaking or dressing up; they only have to offer their feelings. And if they appear to be attracted to any of the women in the women’s bathroom, they can, I presume, simply claim to be lesbians.

For those who might accuse me of exaggeration, I would remind them of a young man prominently featured in British newspapers who proudly announced that he was so gender-fluid that he decided, each day, whether he was a man or a woman, and chose his clothing for the day accordingly. His story was presented with the utmost solemnity. His remarkably tolerant girlfriend apparently did not object to the fluidity of her attractions.

That’s the thing about the new gender ideologies: They are inherently impervious to follow-up questions. If someone says that they are now a woman, regardless of the fact that they have a penis, or declare that they are a man regardless of the fact that they have a vagina, there’s really no follow-up confirmation anyone can do to see if this is, in fact, the case. After all, it is the Supremacy of the Feelings that count here—not reality. Everyone else is now expected to fall in line and pretend that the Emperor does, in fact, have clothes on—even though he doesn’t, and everyone can see that he’s a dude.

The secularists of our society have officially ceased pretending that they believe in science. Instead, they have gone mad in their pursuit to ensure everyone can live in a reality of their own construction.

The cultural hangover is sure to be skull-splitting.