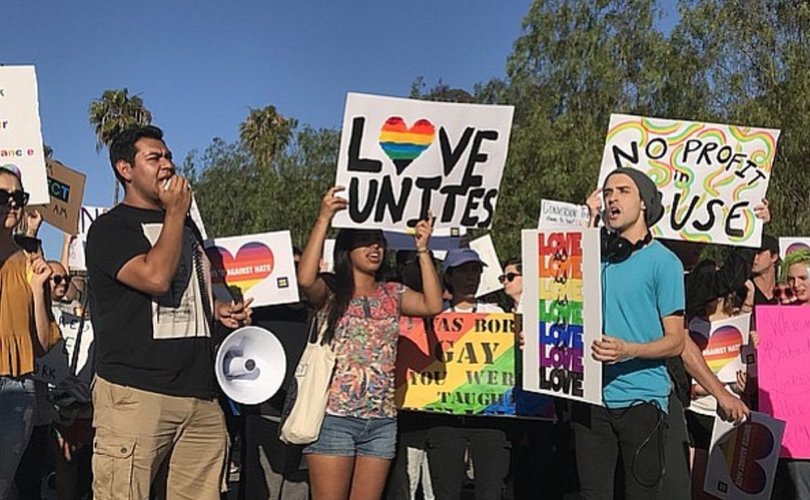 June 16, 2017 (LifeSiteNews) — Anyone who’s been in the pro-life and pro-family movement for any length of time is familiar with the Left’s hypocritical, one-way approach toward “Diversity” and “Inclusion.” It’s all about tolerance and diversity for THEM but not for their critics.

Such “reverse intolerance” is on display again this weekend in San Diego, with as many as 1,000 pro-LGBTQ protesters expected to converge on a Christian ex-“gay” conference designed to help and uplift men and woman seeking to overcome unwanted same-sex attraction.

The stated goal of at least some of the protesters is to disrupt the Restored Hope Network (RHN) conference, representing the largest coalition of ex-homosexual ministries in the world. (A previous ex-gay umbrella group, Exodus International, collapsed after its leaders moved away from the Bible’s teachings against homosexual behavior.)

In a press release, RHN says that it “has been on the frontlines of helping people overcome homosexuality.” It now comprises 59 affiliated ministries like First Stone, in Oklahoma City, “dedicated to helping people find freedom from same-sex attraction.”

The Restored Hope Network conference is under way at City View Church in San Diego. According to RHN, “as many as 1,000 protesters are mobilizing, handing out posters and signs at gay bars, pride marches, and have pledged to protest” outside one of the hotels used by the 400 attendees tonight.

Restored Hope Executive Director Anne Paulk, a former lesbian herself, says, “We are prepared for the protest and intend to be kind. We realize they [protesters] are operating out of misunderstanding and misconceptions about who we are and what we do.”

“Tolerance is a two-way street,” Paulk said. “We expect the respect and freedom to leave homosexuality as much as respecting their right to remain homosexual or transgender.”

But that’s just the point: many LGBTQ activists have zero “respect” for ex-gays like Paulk and RHN Board Member Stephen Black and ex-transgenders (like Walt Heyer), and so they feel no obligation to defend their right to speak. Instead, they ridicule them and pressure the media to deny them a public voice.

The dominant media stokes this arrogance by ignoring successful ex-gays and putting out “news” stories that read like they could have been written by the staff over at GLAAD, an anti-Christian LGBTQ media pressure group.

It’s all part of the disturbing trend nationally by which those on the Left justify shutting down conservative speech they dislike under the guise of “protecting the planet” or protecting victims from “violence”– ironic indeed, since it is the Left that increasingly is carrying out or fomenting violence across America (even against Republican Congressmen).

“They [Restored Hope] are not welcome in this city,” said a gay rights activist organizing the protest, adopting the neo-totalitarian talking points of a movement so steeped in “gay pride” that it cannot tolerate dissent, or merely engage its foes with civility.

“This hateful practice is a result of the bigoted and misguided beliefs of religious extremists, and there is no place in San Diego for its promotion or execution,” Will Rodriguez-Kennedy, president of San Diego Democrats for Equality, told the Times of San Diego.

“Hateful practice”? People telling how God helped them overcome a sin pattern in their life so that they could better live for Him?

Paulk says the LGBTQ militants “plan to do everything within their power” to disrupt the RHN conference, which is one of the least “political’ and most innocuous events in the Christian cultural world.

I have attended two previous RHN conferences, and can attest that they are some of the most apolitical, Christ-honoring meetings I have ever been fortunate to be a part of. There is much beautiful, Christian musical worship at these gatherings. Men and women, mostly evangelicals and Catholics, who were broken sexually give their heartfelt testimonies about overcoming the strong, destructive pull of homosexuality in their lives, through Jesus Christ.

You would have to have a heart of stone not to be touched by their stories, which is perhaps why the other side is so desperate to silence them in the public square. They know that just as the “gay” and now “transgender” movements advanced by telling people’s personal stories, the ex-LGBT movement will grow once more Americans are exposed to its powerful, firsthand witnesses of transformation away from sexual and gender confusion.

Paulk says, “We are dedicated to restoring hope to those impacted by homosexuality,” but RHN notes that “the division between people who want freedom from same-sex attractions and those who want acceptance and celebration for their behavior continues to grow.”

I wonder why the LGBTQ Lobby has a long history of trying to shut down these peaceful, ex-“gay” gatherings, and wildly distorting them with all sorts of vitriolic rhetoric that smears ex-homosexual strugglers as “haters” and “extremists”?

What is it exactly that “gay” and “transgender” activists—enjoying such worldly power—are so afraid of?