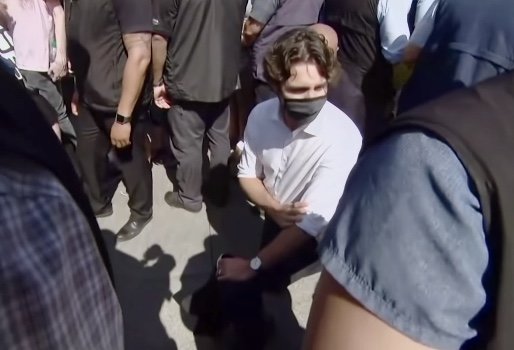 Prime Minister Justin Trudeau takes a knee in a crowd at a protest in Ottawa.YouTube

June 8, 2020 (LifeSiteNews) – Ontario, Canada is still officially in a state of emergency. In this province you are not allowed to gather in groups larger than five. If you violate this order, you risk a fine of hundreds, or even thousands of dollars. And yet, on Friday, Canadian Prime Minister Justin Trudeau was photographed kneeling in the middle of a crowd of hundreds of protesters in Ottawa, a city located in Ontario.

You can think that what happened to George Floyd was demonically evil (and it was) and that the cause the protesters are protesting in favour of all around the world is crucially important (ending racism sure as heck is), and also wonder what the hell is going on with public officials’ response to these protests with respect to the Covid-19 pandemic.

For months now we have been repeatedly told that if we don’t follow self-isolation rules to the tee, we are putting lives at risk. It wasn’t about us, we were told. Maybe we felt confident that we’d be ok if we got the virus. But that didn’t matter. It was about the fact that we could become carriers of Covid, and transmit the virus to vulnerable people. This was literally a matter of life and death, possibly for millions of people.

Because of this, we were not allowed to be at the deathbeds of loved ones, could not mourn the lives of our deceased with funerals, could not be with our closest relations and friends at their weddings, and had to stomach the loss of jobs, businesses, and in many cases significant harm to our mental and physical health. We had no choice. If we didn’t accept the costs and follow the rules, people would die. As Princeton Professor Robert George notes: “No exceptions, even to support and comfort the dying.” Because we were all in this together.

And yet, yesterday, my prime minister stood in the middle of a huge crowd – violating the stay-at-home orders that he has repeatedly lambasted fellow Canadians for ignoring these past few months. “You all think you’re invincible. You’re not. Enough is enough,” Trudeau lectured Canadians who were flouting the isolation rules in March. “Go home and stay home.” Meanwhile, over 1,200 health care experts signed an open letter this week saying that the protests should not be shut down over coronavirus concerns, since the protests are “vital to the national public health.”

Let me be clear: I’m not saying these protests shouldn’t happen (the violence that has marred some of them is, of course, another matter). Heck, I’ve been vocally supporting loosening the lockdowns faster. And I would love nothing more than for racism to be wiped off the face of the planet. But I am saying that this response is a huge case in point for why people are increasingly distrustful of the health experts, public officials and the media. A couple weeks ago, protesters protesting the lockdowns were told they were murderously reckless. Individuals who participated in those protests were publicly shamed and berated universally by the health experts and the media. Now, crowds many, many times larger, are being encouraged to gather by the very same health experts and media because, in this case, it seems, the cause is worth the risk.

Maybe the cause is worth the risk. It’s not the point I’m interested in arguing. What I am interested in pointing out is that this is a naked example of a double standard, and that it’s confusing as hell for people who are trying to figure out what’s going on, and who to believe. This is not “the science.” This is an example of how scientists, the media and other experts and public officials allow political considerations to influence their allegedly objective scientific judgments, presenting their political viewpoints as “the science”.

Many of those who attended anti-lockdown protests also argued that the cause they were championing was “vital to the national public health” – i.e. to mitigate the demonstrably serious collateral damage being caused by the lockdowns themselves, as evidenced by such things as skyrocketing calls to suicide hotlines, or the thousands of people who have missed cancer screenings, etc. You can disagree with them, if you like. But I think we can all agree that if something – i.e. a public protest – poses a grave threat to life in one case (anti-lockdown protests), then logically speaking the same thing – public protests – must pose a grave threat to life in another case (the BLM protests). In fact, given that in the latter case the protests have been far more widespread, and many times larger (as I write this, they are projecting as many as 100,000 protesters in a single city – D.C.) the threat to life is also, presumably, that much greater. And yet, this is precisely not what the health experts are currently saying. Instead, they are proactively downplaying the risks and arguing for exceptions in the one case while labeling the other as evil.

As a friend of mine wrote a few days ago, what people desperately need right now is “to know that this has been worth it.” The months shut up in their apartments. The lost jobs. The conscientious observance of every dot and tittle of the health authorities’ instructions. Life put on hold. We need the assurance that our health authorities were acting in good faith. That the fines leveled against people for taking their dog for a walk, for driving in a car with someone who wasn’t from their household, or for wishing a friend happy birthday from a car – that these seemingly extreme and harsh penalties stemmed from a legitimate cause: the pressing need to halt transmission of a deadly virus; the need to ensure that nobody was cutting corners in our collective responsibility to protect the vulnerable. But instead, what we are seeing is health authorities and the media overnight tossing the whole bloody thing. No half measures here. One day, sunning yourself in a park is a high crime, the next day, a failure to enthusiastically support crowds of tens of thousands of protesters just might well show that you don’t take racism seriously.

So, don’t be surprised if people become confused and even angry if, on the one hand, they are being told that by no means can they be allowed an exception to go visit the deathbed of their grandmother, while on the other hand, the prime minister of a country still officially on lockdown, in a province that currently only allows a maximum of five people to gather, is publicly flouting his own lockdown orders and marching in the middle of a large crowd of people.

As I see it, there are two possible interpretations of Trudeau’s presence at the protest: 1) The public experts have been telling us the truth about the risks posed by Covid these past few months, but Prime Minister Trudeau is willing to risk causing people to die by exposing himself to a crowd, and encouraging other people to do the same. 2) Despite what they’ve been telling us, and despite the burdens (sometimes crushingly heavy) we have all been expected to shoulder, Trudeau (and all those health experts who’ve been ordering us to stay home) don’t actually think there’s any very serious serious risk involved in being in a large group of people right now.

I’m not sure which interpretation is more troubling.

For weeks – now months – dying people have been made to draw their last breath entirely alone in hospitals and hospices, denied last rites or even the presence of a family member, because of public health requirements we were told simply could not be relaxed. No exceptions, even to support and comfort the dying. Now. Now. Now. Some of the very same public health professionals and public officials who insisted on that brutally rigorous policy are supporting mass demonstrations that by any reckoning pose a massively greater threat to public health and safety. Massively greater. I’m accustomed to hypocrisy and bad faith among our professional elites and public officials, but this one is nevertheless stunning to me. Just stunning.

Well, well, well, even a writer at Guardian – after a lot of throat-clearing – agrees. This took some guts. Quote:

Consider France, where I live. The country has only just begun reopening after two solid months of one of the world’s severest national quarantines, and in the face of the world’s fifth-highest coronavirus body count. As recently as 11 May, it was mandatory here to carry a fully executed state-administered permission slip on one’s person in order to legally exercise or go shopping. The country has only just begun to flatten the curve of deaths – nearly 30,000 and counting – which have brought its economy to a standstill. Yet even here, in the time it takes to upload a black square to your Instagram profile, those of us who move in progressive circles now find ourselves under significant moral pressure to understand that social distancing is an issue of merely secondary importance.

This feels like gaslighting. Less than two weeks ago, the enlightened position in both Europe and America was to exercise nothing less than extreme caution. Many of us went much further, taking to social media to castigate others for insufficient social distancing or neglecting to wear masks or daring to believe they could maintain some semblance of a normal life during coronavirus. At the end of April, when the state of Georgia moved to end its lockdown, the Atlantic ran an article with the headline “Georgia’s Experiment in Human Sacrifice”. Two weeks ago we shamed people for being in the street; today we shame them for not being in the street.

Public health experts – as well as many mainstream commentators, plenty of whom in the beginning of the pandemic were already incoherent about the importance of face masks and stay-at-home orders – have hemorrhaged credibility and authority. This is not merely a short-term problem; it will constitute a crisis of trust going forward, when it may be all the more urgent to convince skeptical masses to submit to an unproven vaccine or to another round of crushing stay-at-home orders. Will anyone still listen?