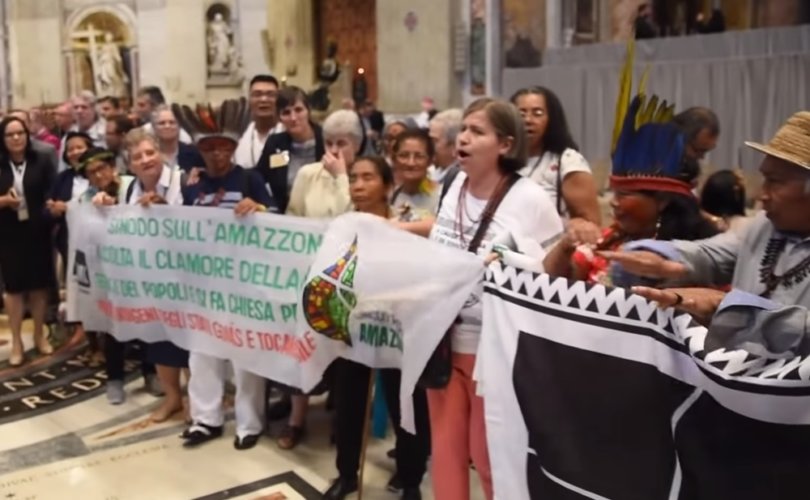 Mass, cappuccino, housework, work. It’s been a cold day, relatively speaking, and I kept the windows shut. It’s quieter that way, and the boys on the opposite roof, who made a return appearance this week, are less tempted to use me for target practice.

I left for the Sala Stampa early, press pass firmly clipped to my neckline. It’s the day the media and, therefore, the world finally see a document from the synod participants. People talk about “the synod fathers,” but it’s clear that specially selected members of the laity, including women, are also taking part. Maybe one day we’ll talk about “synod mothers.”

I’m of two minds about that. One way I cope with insomnia is listing off alphabets of female saints: St. Agnes, St. Barbara, St. Clare of Assisi, St. Dorothy, St. Elizabeth of Hungary, St. Frances of Rome … There’s no shortage of brilliant women in the Church Triumphant, some of whom would have made wonderful “synod mothers”: St. Gertrude the Great, St. Teresa of Avila, St. Teresa Benedicta of the Cross are just the most obvious choices. But none of them are known for having danced around pagan idols in Roman collars singing songs about the biome, so I’m not sure they would fit in.

All but one of the nameplates on the panelists’ table at the front of the Aula Giovanni Paolo II didn’t correspond to the names promised on the “bollettino” (bulletin). This was confusing, but I’m now used to being confused. In defense of the lady simultaneously translating from Italian, Spanish, and Portuguese into English, even my Italian tutor has a hard time with bishop-speak.

We were soon told both that the promised bishops―among them the new Canadian cardinal Michael Czerny―had the afternoon off and that they had other appointments, which I believed and others didn’t.

The sacrificial lambs thrown to the press corps were, therefore, Sister Daniela Cannavina, the head of the Confederation of Latin American and Caribbean Religious (CLAR); Mauricio López Oropeza of REPAM; Archbishop Rino Fisichella, the President of the Pontifical Council for the Promotion of the New Evangelization; and Bishop Mario Antonio da Silva.

Cristiane Murray, the elegant Deputy Director of the Sala Stampa was gone, replaced by the Director himself, Matteo Bruni. Seasoned Vatican correspondents found the substitution significance whereas I just noted that Bruni looks younger than me. (He is.)

The press had been sent the Report of the Synod “Small Circles” by email, and we were reminded that it was embargoed until after the end of our briefing. My colleague Diane Montagna emailed it to LifeSiteNews, and we settled in to listen to the presentations.

Every day we hear about “new paths,” and sure enough Sr. Danielle Cannavina said that we should think about the Amazon to open up “new paths” for the Church. She also indicated that synod participants had to “go beyond our fears and concerns” to make these “new paths” possible. This suggested that at least some synod fathers aren’t getting with the path-clearing program, hand-picked though they be.

Cannavina also mentioned “dialogue” and giving a strengthened role to women, albeit without a “clericalist approach.” She said that women must be formed theologically and pastorally to address changing realities, and I totally agree. My M.Div. innoculated me against feminist theology for life.

Archbishop Fisichella said that because the synod focussed on the Amazon, we reflected on the universality of the Church. It was of primary importance to respect all cultures and peoples, he said, perhaps unaware that there is a poster showing a naked woman breastfeeding a pig in a church down the street. He also said that concrete proposals, like the creation of an “Amazonian rite,” were made in the Small Circles.

Bishop Mário Antônio da Silva, who is one of the authors of the final report to be handed to Pope Francis, said that the synod was an opportunity to be in touch with life, hear the voice of the Amazon and traditional peoples, open up “new paths” and establish and “integral ecology.” He said the synod had followed a process of discernment using the Instrumentum Laboris, and that there have been proposals for the ordination of viri probati [respectable, married, elderly Catholic men] and an “Amazonian rite.”

Mauricio López Oropeza, Executive Secretary of REPAM, had the open, frank expression and the creative simplicity of someone well-grounded in Ignatian spirituality. One giveaway was that he asked the group for 30 minutes of silence to contemplate God’s “dream for reality.” That was the closest thing to public prayer I have experienced in the Sala Stampa and a gutsy thing to do at a press conference, so good for him. López mentioned that Pope Francis had sat among the native people and listened to them, looking for “new paths.” The synod has already opened up “new paths” and new doors, he said.

Naturally he was thinking of the Amazon, but I suspect the “new paths” will lead not only through the rainforest but the Black Forest, too. So many Germans who don’t go to Mass, yet so many German women longing to minister to them. (I hasten to mention my pre-war German ancestors, lest I be accused of racism.)

Anyway, question time. A reporter from the Associated Press asked for examples of ecological sins and was rewarded with speeches about “inequality.” Archbishop Fisichella got a laugh by saying that he would prefer to decrease than increase the number of sins (on the books?).  Then Inés San Martín of Crux asked about a woman who had reportedly interrupted the synod to demand votes for women. Sensation in Sala Stampa―followed by vague denials and an insistence that the contribution of women to the synod is highly valued.

Zenit asked why the English/French “Small Circle” had produced its report in Spanish (convenience), and my LifeSiteNews colleague Diane asked about the pro-abort Ford Foundation funding and if the Dicastery for Communications had learned who the wooden statue was yet. She is now busily writing an article about the replies―and the lack thereof.

These questions were not popular with the journalists in front of me, who shifted, muttered, and sighed, as if big grants, let alone idol worship in Rome by Catholics, are suddenly not newsworthy.

I shot up my hand because I wanted to ask about the breastfed pig poster, but instead the nod went to someone who asked if there were modern precedents for the Amazonian rite.

So far off the radar is the English-speaking world, apparently, that Bishop Fischella didn’t mention the 1983 “Anglican Use” but had to harken back to the 18th century and then forward to the limited innovations of the Neocatechumenal Way. Bishop Mário Antônio da Silva cited the “sacred nature” of the Amazon. Paolo Ruffini, the prefect of the Dicastery for Communications, downplayed the idea of a unique “rite” by saying that there were proposals to include Amazonian symbols in the Mass, and that proposals were still being collected.

However, when I went home to grapple with the Presentazione delle Relazioni dei Circoli minori, I discovered that Italian Circle B had no trouble with a full-on Amazonian rite, since there are “about 23 different rites” in the Church. Later that night―it’s a long document―I read that Portuguese Circle A even wants to bring back the pagan “religious leadership,” i.e.. the spiritual healers and traditional priests.

If I were snarky, I’d say I’m looking forward to the Synod on the Celtic Nations, so I can dance at Edinburgh’s Beltane Fire Festival and have recourse to Druids.

Between bouts of reading the presentations, which were very repetitive and sometimes came across as high school religion papers thrown together the night before, I ran out to dinner for a good-bye supper with my husband and the priest friend I had to cancel on last week. I calmed down long enough to eat a beautifully cooked fish, but then I rushed out again to put together an article about the Small Circles reports.

Now it’s clear that the logistics of translating the whole document, employing staff members in three different countries and time zones, mean that it’s not going to be published tonight.