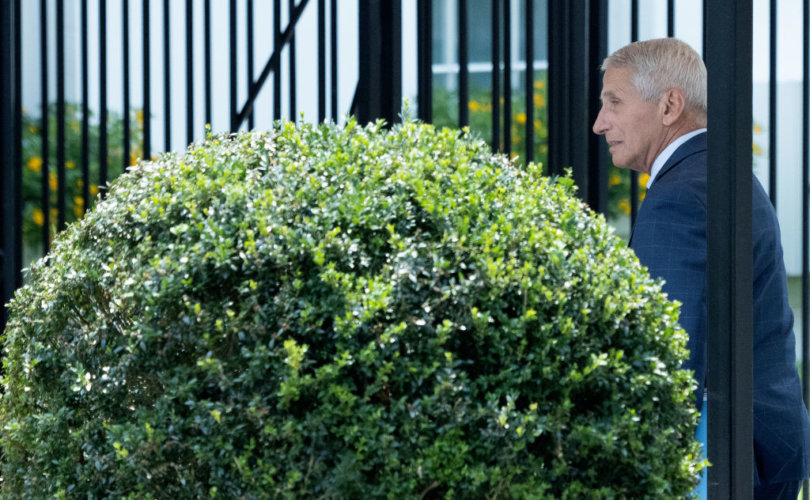 (LifeSiteNews) — From the beginning of the pandemic, Dr. Anthony Fauci has angrily denied reports that he was funding gain-of-function research at the Wuhan lab.

Gain-of-function, or GOF, is the intentional engineering of viruses in the lab to make them more infectious and deadly to human beings.

When Fauci was pressed again on this point by Sen. Rand Paul at a June congressional hearing, he insisted that the National Institutes of Health “has not ever and does not now fund gain-of-function research in the Wuhan Institute of Virology.”

Then Fauci doubled down: “If anyone is lying here, senator, it is you.”

But what if it’s Fauci who’s lying?

We have long known that Fauci approved NIH grants to Peter Daszak’s EcoHealth Alliance, which in turn subcontracted some of the work to the Wuhan Institute of Virology. And right up to the onset of the pandemic, Daszak himself was bragging about the “great progress” being made on the gain-of-function front.

Did Daszak’s royal “we” refer to GOF research being done by his subcontractor, the Wuhan Institute of Virology?

New documents obtained from the NIH by The Intercept suggest that the answer is yes. After reviewing 900 pages of grant applications and progress reports, The Intercept authors conclude:

Scientists working under a 2014 NIH grant to the EcoHealth Alliance to study bat coronaviruses combined the genetic material from a “parent” coronavirus known as WIV1 with other viruses. They twice submitted summaries of their work that showed that, when in the lungs of genetically engineered mice, three altered bat coronaviruses at times reproduced far more quickly than the original virus on which they were based. The altered viruses were also somewhat more pathogenic, with one causing the mice to lose significant weight. The researchers reported, “These results demonstrate varying pathogenicity of SARSr-CoVs with different spike proteins in humanized mice.”

Let’s break this down.

First, the grants — there were at least two — were intended to fund GOF research, that is, the creation of new chimeric SARS-related coronaviruses that could more easily infect human cells and would thus be more deadly to human beings.

And that’s exactly what they did, as Daszak’s progress reports back to the NIH make clear:

· Increased Pathogenicity: “The altered viruses were also somewhat more pathogenic, with one causing the mice to lose significant weight.” This is not a Weight Watchers program for mice. The more weight the mice lose, the sicker they are, and the more dangerous the virus.

So if the Wuhan researchers had succeeded in genetically engineering three viruses to be more infectious, one of which was more deadly as well, then it would seem that they met the GOF goals. They certainly thought so: “These results demonstrate varying pathogenicity of SARS[-related-coronaviruses] with different spike proteins in humanized mice.”

Vincent Racaniello, professor of microbiology and immunology at Columbia University, agrees: “There’s no question that from the weight loss [of the mice] it’s gain of function. Tony Fauci is wrong saying it’s not.”

Bear in mind that we are not talking about ordinary mice, but so-called “humanized” mice. These are mice that have been genetically engineered to resemble human beings in one very specific way: The mouse receptors on their lung cells have been replaced with human receptors.

Viruses make their way into cells by attempting to insert their spike protein “key” into the receptor’s “lock.” The researchers in Wuhan attached various spike protein keys to the original coronavirus to see which one “fit” best. In three cases the new key worked so well on the human receptor that the virus was able to quickly gain entry and replicate that much faster.

All of the scientists interviewed by The Intercept insisted that the Fauci-funded research “could not have directly sparked the pandemic. None of the viruses listed in the write-ups of the experiment are related to the virus that causes Covid-19.”

Well, yes and no.

The SARS-CoV-2 virus is distinctly different from the chimeric viruses created in the Wuhan labs’ civilian research program. But there was a parallel military research program run by the PLA in Wuhan whose experiments with genetically engineered viruses and humanized mice were, of course, not reported in the published literature and certainly not to the NIH.

This program surely relied on techniques that we taught Chinese military scientists and may have even benefited from Fauci’s funding as well. Who knows? The Wuhan Institute of Virology is a Black Box. Ditto other Chinese labs, military and civilian alike.

The question we should be asking is this: Would there be a COVID-19 pandemic if the NIAID, the agency that Fauci oversees, had not trained and funded Chinese researchers over the years?

The answer is: probably not.

At the end of its damning article, The Intercept tries to give Fauci an out: “[T]he documents do not prove Paul’s claim that Fauci was lying, as they do not make clear whether Fauci read them”

For over a decade Fauci has been the main cheerleader and chief funder of gain-of-function research. When that research was effectively banned in the U.S. by more prudent people, he ensured that it continued overseas. He was determined to create a superbug.

If the coronavirus that caused the COVID-19 pandemic has a godfather, his name is Anthony Fauci.