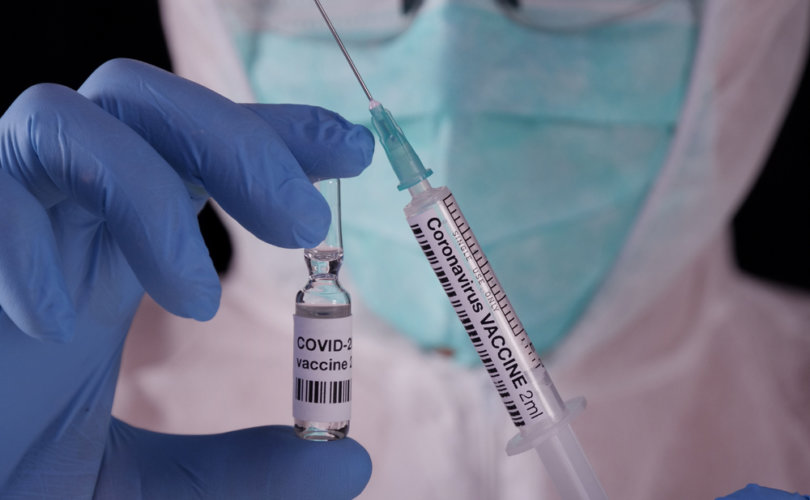 The simple reason that “my body, my choice” does not work as an argument for abortion is because the unborn child being aborted is not part of his mother’s body. A child in the womb is a whole, distinct, living human being, with his own DNA, heartbeat, organs, and unique blood type. Your right to “reproductive freedom” does not include a right to violently dismember and destroy the body of your offspring.

The tiny child in the womb has a right to bodily autonomy, to not have his body violated and his arms and legs twisted off and his skull crushed.

His mother’s right to bodily autonomy ends when another person’s life is at stake.

What about vaccines? Don’t we have an obligation to protect each other? Isn’t refusing to be vaccinated putting other people at risk?

An injection that is billed as a vaccine but does not immunize a recipient from the disease and only lessens his symptoms is not a vaccine; it’s a prophylactic therapeutic. And, as evidenced by U.S. Food and Drug Administration (FDA) warnings and reports submitted to the U.S. government’s Vaccine Adverse Event Reporting System (VAERS), not a risk-free one.

Our Pfizer juice-pushing world leaders even admit this. They constantly bleat about how the best way to protect oneself from COVID-19 is to be vaccinated with as many doses as available (right now in the U.S., for everyone over 18 that number is three, but many believe it’s likely to go up) because vaccination supposedly reduces the chances of severe disease or hospitalization.

But if we follow their premise that COVID shots don’t stop the spread of the disease, and only reduce symptoms, at best, shouldn’t people be allowed to decide how “severe” of an infection they’re willing to personally risk?

“Take your vaccine so mine will work” is about as logical as saying “bundle up so I don’t get cold” or “eat your food so I don’t stay hungry.”

What about the argument that people should take vaccines so that those who can’t have the vaccines are protected?

The same people making that argument are usually the ones who argue that everyone should be COVID-jabbed and that there isn’t ever really a medical reason why someone couldn’t be vaccinated — even the immunocompromised, pregnant women, or those with contraindications to vaccines. In the U.S., health officials recommend a fourth vaccine dose for the immunocompromised. Medical exemptions written by doctors are regularly rejected by vaccine-mandating employers and universities.

There is also no precept in medical ethics that obliges someone to undergo a risky procedure or intervention to provide a possible health benefit to another person. Is someone who can’t swim obligated to try to save someone drowning in the middle of the lake, or send his children who can’t swim into the lake to try to make a rescue?

Even in pregnancy, which is a normal physiological process, a mother is not obligated to forfeit her own life to save her baby. The principle of double-effect says a surgery intended to save her life but resulting in the foreseen unintended death of her unborn child is morally okay. St. Gianna is recognized as a saint precisely because of her heroic rejection of cancer treatment that might have harmed her unborn child.

And the relationship between a mother and her unborn child is very different from the relationship a “vaccine-hesitant” person has to a hypothetical stranger who the CDC says can’t be vaccinated (and again, I would love for the pro-forced vaccine crowd to actually admit there are some people who have medical contraindications to the coronavirus vaccines).

No one should be forced to insert something into his body — particularly something that doesn’t even stop the spread of disease and that could injure or kill him. Forced vaccines are medical rape, and if they are normalized under the false pretense of “protecting other people” they will open the door to a host of forced procedures and disgusting injustices.

People need to wake up to what is at stake here. This is a war against freedom and choice, and it is about how far the all-powerful State can flex its muscles and keep people under its iron fist. This IS a new fight for freedom…

And the mandatory medical measures, not least of which, forcing folks to get the jab whether they want to or not, are something we all must resist. As I have said often before, if the State can force you to take a vaccine against your will, they can make you do anything: to be sterilised; to be forced to give up an organ on demand; to be rounded up in internment camps; to be euthanised; and so on. There will be no end to the coercion and enforced subservience to Big Brother.

As to the issue of mandatory jabs, the vital importance of informed voluntary consent is absolutely essential here. But few seem to get it. Way too many brainless wonders will drone on and on about how there is no compulsion here – it is all your own choice. Yeah right.

When the State – and most businesses – can make you lose your job, your livelihood, your ability to feed your family, and strip you of your basic human rights to travel, to shop, to go to school, to leave your own state or country unless you get the two, three or who knows how many jabs, then you are NOT free to choose – you are being coerced, pure and simple.

Ironically, many on the left today argue that “my body, my choice” means the right to dismember someone else’s body and stop his or her little heart from beating, but not the right of an individual to decline a prophylactic medical intervention.

You have the right to your body. As Christians, we ultimately believe our bodies are temples of the Holy Spirit, and belong to God. But something everyone of good will can reasonably agree on is that our bodies do not belong to the state.

“My body, my choice” should mean no human’s autonomy is violated — no matter how small that human is or what “variant” of the coronavirus society is facing.

Celeste McGovern contributed to this piece.