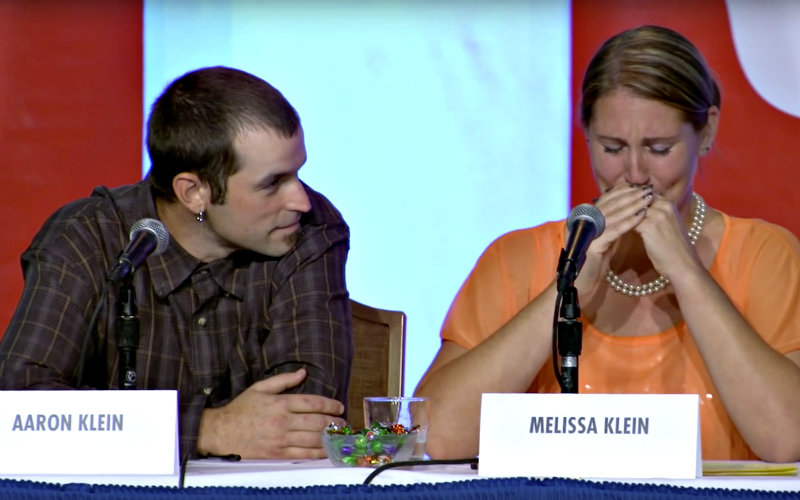 Baker Melissa Klein of "Sweet Cakes by Melissa" weeps while recounting how her business was fined $135,000 for refusing to bake a cake for a gay 'wedding'

Nov. 21, 2016 (LifeSiteNews) – When I wrote in my column last week that many Christians voted for the Trump-Pence ticket because they felt that their communities were being threatened by the steady erosion of religious liberty under the Obama Administration, my assertion triggered a wave of emails, Facebook messages, and tweets accusing me of lying. Christians are not being targeted, my critics informed me, and it is ridiculous to say so.

Obviously, to a lot of these critics that the family businesses of Christians are being shut down does not merit the description of a “threat,” because they think that this is no big deal. Those Christians are hateful homophobes, after all, and “religious liberty” is just a fancy label for “bigotry.” Others seem to think I was overstating my case, and that such things rarely, if ever happen. Still others apparently believe that while we are obliged to listen to any number of identity groups when they claim to feel threatened or targeted, Christian claims are somehow invalid, or don’t count. Some even tried to racialize the issue, suggesting that the case I made about Christian beliefs was white privilege, or whatever – even though there is no such thing as “white Christian” beliefs.

In response, I have compiled a very short and very incomplete sampling of the sorts of things currently happening in the United States of America. These things are happening to Christians. And whether you think these things are deserved consequences or irrelevant to whatever Oppression Scale you happen to use, they highlight why many Christians do feel as if their communities are being targeted. Disregard them if you like, but realize that just because you haven’t experienced something, doesn’t mean it isn’t happening.

Jack C. Phillips, a baker in Denver, Colorado, was asked to create a wedding cake by a gay couple, Charlie Craig and David Mullins, in 2012. Phillips refused, citing his Christian beliefs, but offered to serve them any other baked goods. Mullins and Craig opted to sue him instead, claiming that he had treated them in a “dehumanizing” way, and two courts ruled that Phillips should be coerced to make the wedding cake for the couple. Instead, in order to remain loyal to his conscience and his faith, Phillips stopped baking wedding cakes entirely. According to him, this has cost him 40% of his business revenue.

Elaine and Jonathan Huguenin were forced by a court in New Mexico to pay more than $6,600 in fines in 2012 after they declined to use their business, Elane Photography, to photograph a lesbian “commitment ceremony.”

The University of Toledo fired one of their staff members when she disagreed with the idea that gay marriage was a civil rights issue:

The university fired Crystal Dixon in 2008 from her interim post as associate vice president for human resources because she wrote an op-ed piece in the Toledo Free Press arguing that the gay rights movement should not be compared to the civil rights movement because she, as a black woman, did not get to choose her minority status but, she claimed, homosexuals do.

In 2013, the state of Oregon went after the little family bakery of Aaron and Melissa Klein, when they declined to provide a wedding cake for a lesbian wedding, again citing their Christian beliefs. The state of Oregon fined them, going so far as to garnish their bank accounts and assets and taking a total of $144,000 for their refusal to violate the tenets of their faith. The bakery, which the couple worked to create for years, was shut down. Aaron Klein is currently on disability after injuring himself working as a trash collector to provide for the couple’s five children. Their family was also the target of a vicious campaign by gay activists intent on destroying their business, regardless of the cost.

In 2013, Crisis Magazine reported that the anti-Christian campaigns had spread to Vermont:

A lesbian couple sued the Wildflower Inn under the state public accommodations law in 2011 after being told they could not have their wedding reception there. The owners were reportedly open to holding same-sex ceremonies as long as customers were notified that the events personally violated their Catholic faith. It wasn’t enough. The inn had to settle the case in 2012, paying a $10,000 fine and putting double that amount in a charitable trust. Also, the inn is no longer hosting weddings, although the decision reportedly was made before the settlement.

High fines to punish Christians for remaining true to their conscience are becoming increasingly normal. As LifeSiteNews reported in 2014:

The New York State Division of Human Rights (DHR) has ruled that the Roman Catholic owners of an Albany-area farm violated the civil rights of a lesbian couple when they declined to host the couple’s same-sex “marriage” ceremony in 2012. Robert and Cynthia Gifford, who own and operate Liberty Ridge Farm in Schaghticoke, were ordered by DHR Judge Migdalia Pares and Commissioner Helen Diane Foster to pay $10,000 in fines to the state and an additional $3,000 in damages to the lesbian couple, Jennie McCarthy and Melissa Erwin for “mental pain and suffering.” Additionally, the Giffords must provide sensitivity training to their staff, and prominently display a poster highlighting state anti-discrimination laws.

In 2014, an Indianapolis bakery owned by Randy and Trish McGath found itself the target of an online campaign launched by gay activists after they cited their Christian beliefs as the reason they would not provide a cake for a same-sex wedding. They were smeared as homophobes and hateful people, although they were willing to serve the gay community—just not participate in the celebration of a same-sex wedding.

Baronelle Stutzman, the owner of Arlene’s Flowers and Gifts in Richland, Washington State, was ordered to pay over $1,000 in fines in 2015 after declining to provide floral arrangements for a same-sex wedding. She had previously sold the couple in question flowers many times, but stated simply that providing floral arrangements for a wedding would violate her Christian beliefs.

In 2015, Mennonite couple Richard and Betty Odgaard were forced to close their business in Des Moines, Iowa, after being targeted by gay activists for their refusal to host a gay ‘wedding’ in their wedding chapel. A boycott campaign replete with vicious, profane messages and a civil rights complaint resulted in the Odgaards’ having to pay out a $5,000 settlement—ultimately, they lost their livelihood.

The level of hatred fueling many of these campaigns is somewhat ironic for the #LoveWins crowd. As LifeSiteNews reported in 2015:

A small-town Indiana pizzeria owned by a Christian family has closed its doors after being terrorized by pro-homosexual bullies opposed to the family’s religious values. Memories Pizza in Walkerton has received death and firebombing threats and had its website hacked…The attacks came after ABC-57 out of South Bend aired a piece March 31 highlighting the pizzeria owners’ support for Indiana’s hot-button Religious Freedom Restoration Act. The station claimed Memories Pizza, owned by Kevin O’Connor, was the “first business to publicly deny same-sex service.”

The owners specifically stated that anyone was welcome in the restaurant, but the story was set off by the fact that they said they would not cater a homosexual “wedding” because it would conflict with their Christian beliefs.

As I stated earlier, this is a very incomplete sampling. If I attempted to compile every instance of Christians being fired from jobs for stating their beliefs, or denied positions because they oppose same-sex marriage, or had their business targeted, or fined, or shut down, this column would be dozens of pages long. This is happening, and it is happening now. Even liberal commentators like Bill Maher and others are beginning to recognize that Christian pushing back was at least a part of what cost Hillary Clinton the election. Christians are tired of being targeted for simply believing what Christians have believed for 2,000 years—that marriage is between one man and one woman, and that Christians must act in accordance with their consciences. You can ignore their experiences if you’d like. But they are being heard at the ballot box.

‘Persecution plain and simple’: Franklin Graham fundraises for Oregon bakers after GoFundMe shuts them down