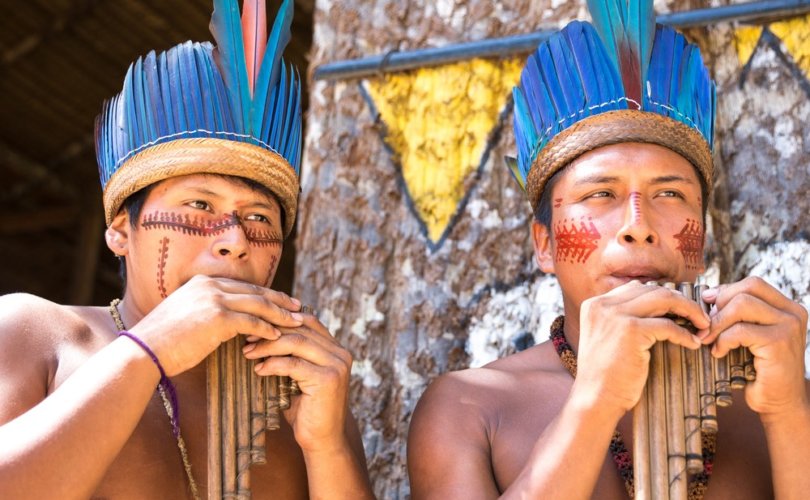 In Rome meals are slow but news is fast. It’s hard to strike a balance between gathering the news and writing the news, to say nothing of ignoring more exciting news until the current story is completed.

Today I woke up too late for early Mass, so instead I checked my messages. There was one from an Igorot ex-shaman’s American grandson who praised my colleague Diane Montagna’s interview with an Amazonian tribal leader.

“It would be nice to hear more from the indigenous there who aren’t on board,” said Rexcrisanto Delson. “As someone with indigenous ancestry, I am appalled with the Synod thus far.”

I agree with Delson that more indigenous voices should be heard defending the Catholic faith, so here’s a link to a video he made about the synod.

After a morning of writing, I went to the afternoon press conference. The auditorium again included a who’s who of anglophone Catholic journalists: Michael Voris, Michael Matt, Christopher R. Altieri of the UK’s Catholic Herald, JD Flynn of the Catholic News Agency (CNA), Christopher Lamb of the UK’s The Tablet. Most of them are men whose tweets and articles I’ve read for years; it’s a privilege to see the names and photos become three-dimensional faces.

Paolo Ruffini, the prefect of the Dicastery for Communication; Fr. Giacomo Costa, S.J., the Secretary of the Holy See’s Commission for Information; and Cristiane Murray, the Deputy Director of the Holy See’s Press Office, seem to be daily fixtures. The synod participants presenting today were all Brazilians: two scientists and a bishop.

But the session began with Ruffini and Costa listing off themes presented at the synod this morning. They included the concepts of ecological sins, ecological theology, and ecological pastoral ministry. Sustainable development, lay ministries, an “option for youth,” women’s roles in ministry, a “Church with an Amazonian face,” and different kinds of migration within the region were other subjects.

Someone brought up the topic of “Why are there no [priestly, missionary] vocations?”, which I found sad, since the answer is clearly “The New Missiology.” If St. Patrick and St. Columba had been told that Christ was already with the pagan Irish and Scots, and they should go forth to be evangelized by them, they might not have bothered setting sail. My family would be worshipping Odin, if not Dagda, Lugh, and Morrigan. And when I think about St. Francis Xavier, who baptized tens of thousands of Asians before dying of a fever at 46, I want to cry.

Also sad was the spirited, learned presentation by Dr. Nobre, not only because he very much believes that the Amazon is being destroyed by commercial interests and that we have no more than 20 years to save both it and the climate, but because he hopes the media will get his message out. Unfortunately for him, the media were much more interested in what Bishop Kräutler had to say about what the Church can do against mining companies and why he thinks married priests are so important for the Amazon.

If anyone is interested, I can offer a summary of “Scientific Framework to Save the Amazon” by Scientists of the Amazon Countries and Global Partners. But back to married priests.

The married priest question was asked by Christopher Lamb of The Tablet. He prefaced it with the Q&A equivalent of “God, I thank you for not making me like this tax collector” by asking the panel to convey his apologies to the Amazonian indigenous people for racist remarks he alleged were made by others in the Catholic media.

This is the second time an English journalist has made a jab at fellow scribes at the presser this week, and call me old-fashioned, but I’m disappointed. In Edinburgh I rub elbows at parties with left-wing journalists for the Guardian, the Scotsman, and even the National, so this lack of collegiality comes as a surprise.

However, I’m grateful to Lamb because he asked about married priests, which gave me my story for the afternoon, Bishop Kräutler having suggested that the indigenous people are incapable of getting their minds around celibacy.

When I returned to my apartment, I contacted Rexcrisanto Delson, the indigenous ex-shaman’s grandson, and asked him what he thought about this. Delson got back to me while I was (finally) at dinner near the Piazza Navona. Here’s what he wrote:

I just heard what Bishop Kräutler said about the indigenous people not understanding celibacy. I find it very offensive as an indigenous person. I even find it very racist. These people who believe such things seem to have forgotten the role of missionaries as understood in the past when the primary purpose and goal was to convert and baptize people – to save their souls.

This Bishop fails to understand that the indigenous do not understand celibacy because their intellect has not been fed the Truth of our Catholic faith. Of course they may struggle with the idea of a man not having a wife because this is foreign to them. They aren't the first who thought this. I'm sure when the Belgium priests and missionaries began evangelizing to my pagan Igorot ancestors, they too were wondering why these men did not have a wife. To them, it isn't natural. That is precisely why they needed to be taught the “supernatural” of our Catholic faith.

How can one's will lead to the priesthood if one's intellect has not been properly been fed the Truth? It can't. This is why the Church needs to focus on elevating the intellect of the indigenous instead of lowering Herself to their pagan beliefs and practices. My pagan ancestors were rooted in the natural law and rich in spiritualism, which made them fertile soil for the seed of our Catholic Faith to grow and flourish. Once they were properly catechized, it was clear to them that head hunting, and their worship of false gods were wrong. After learning about the priesthood and the significance of a priest as persona Christi, they grasped the Truth about celibacy.

My grandfather was a mambunong (pagan shaman), but his daughter (my mother) converted him to the Catholic faith, and he was baptized shortly before his death. She truly feared for his soul. This is what is absent from the Amazon Synod – a real concern for the souls of the indigenous. Countless of Igorots, when presented and taught the Truth, had enough intelligence to follow it and became baptized Christians because man is ordered towards the good. The indigenous people of the Amazon also have the intellect and are fertile soil for the Truth. They are not stupid. They just need to be taught the Truth.

The other two big stories of the day were about Pope Francis. This morning he made remarks suggesting that some Catholics love dogma (that is, immutable and essential truths about God) more than God. Then we discovered that Eugenio Scalfari, the 95-year-old co-founder of newspaper La Repubblica, had just claimed that Pope Francis doesn’t believe Jesus was “God incarnate” during His earthly mission.

As Scalfari has often interviewed Pope Francis, the Catholic wing of Twitter went insane. Journalists demanded a statement from the Sala Stampa, who produced a species of denial at a non-Twitter pace. Fortunately for my rumbling tummy, Martin Barillas wrote our story on the scandal, leaving me free to queue up for a table at the stellar “Cul de Sac.”

I was joined by my colleague Jim Hale, and SPUC International’s Maria Madise, who regaled Jim and me with stories, both funny and sad, about the Family Synod. Afterward, I rejected a taxi in favor of walking back to my building. It occured to me when I noticed it was past 11:00 p.m., that this was not the smartest move for a short, middle-aged woman of obviously foreign appearance. However, my route was along major streets, and a few late-night snackers still lingered at sidewalk tables around the corner from my door. I got home without incident.