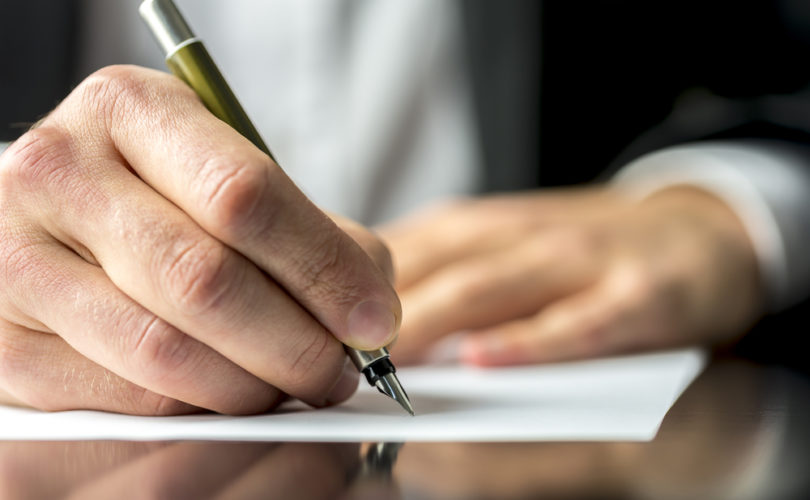 May 2, 2019 (LifeSiteNews) – Catholics who have been paying any attention to the words and deeds of Pope Francis over the past six years are aware of the mounting problems of this pontificate. It is hardly necessary to go into details here; those who care to know either already know or can easily find out. The Open Letter to the Bishops of the Catholic Church that was signed by a number of scholars and pastors, including me, furnishes clear evidence of heretical (not just erroneous) statements that may be found in the approved writings of Pope Francis, as well as evidence—in the form of repeated acts and omissions of governance—that he is fully aware of what he is promoting.

Many people have been asking: What’s the good of taking a step like this? Will it not further polarize the situation? Will it not offer excuses to the Bergoglio party to intensify their confinement and persecution of Catholics? Is it not overwhelmingly likely to be ignored? Can anyone do anything about a wayward pope—mustn’t we just wait until God sorts it out for us? And besides, aren’t the signatories lacking in sufficient theological qualifications?

This document is good and valuable for three reasons.

First, it documents instances of heresy that cannot be denied, taking the textual evidence together with supportive actions. The truths at stake are not minor ones, nor are they hazy, debatable propositions. We are dealing with truths taught directly by Sacred Scripture, confirmed in de fide pronouncements of popes and ecumenical councils. Saying so may not help take away the scales from the eyes of those who refuse to see, but it seems like the next logical step after the Correctio filialis, which had argued that Francis supported or did not oppose heresies. This new document goes a step further: he is “guilty of the crime of heresy” and can be judged as such by those who are competent to govern the Church of God, namely, the bishops, who are not Vicars of the Pope, but true and proper rulers of their own portion of the Lord’s flock, with (as Vatican II teaches) a responsibility for the well-being of the entire Church.

Second, it is a step that we are taking for the historical record, for posterity. It will be seen clearly that Catholics in our day were willing to call out not only sins of clerical abuse, but also sins of heresy, which are worse in kind because they more directly oppose God Himself. The worst sin, teaches St. Thomas Aquinas, is that of infidelity or lack of faith; and this lack of faith is manifested in a denial of any truth of the Catholic Faith.

Third, it is a step we take before God, as a testimony of our conscience. Perhaps there are others who can sleep like babes without raising a voice of protest to the autodemolition of the Faith and the misleading of countless souls; who see what the Pope is saying and doing, but who shrug their shoulders and figure that it won’t redound to lasting damage. I am not such a person, and I think the same is true of the other signatories.

Those who have dismissed this document (and others like it, such as the Correctio filialis) have shown an astonishing lack of seriousness to engage the numerous grave issues the authors have brought forward, preferring to take refuge in comforting sentiments of papal allegiance and boilerplate generalities recycled from scholastic manuals. In this way, although they believe themselves to be putting out fires and calming irrational fears, they are in reality paving a broad path for the triumph of the modernist-narcissist despots who currently dominate high ecclesiastical offices. In the end, those who clear away obstacles from the progress of despots will be no less liable to judgment. Battles are won not by generals only, nor by soldiers only, but also by the cowardice, obliviousness, and complicity of their opponents.

The signatories have been taunted as “lacking in sufficient theological qualifications.” This is false, since several signatories are highly trained theologians of good reputation. But it is also somewhat irrelevant. One does not have to be a medical doctor in order to recognize a compound fracture or a bleeding jugular vein; in like manner, one does not have to be a professional theologian to know when basic truths of the Faith are being contradicted outright. The fool who says “there is no God” is a fool and can be identified as such. Similarly, the man, no matter who he is, who says that those who are already married but living more uxorio with another partner may be admitted to Holy Communion is denying truths of natural law, divine law, and ecclesiastical law, established in both Scripture and Tradition. Such a one is dissenting from the truth of the Faith.

As the last three pages of the Letter explain—and I highly recommend that those who have not yet read the Letter to the end read these last pages without delay—a broad consensus of Catholic authors allow for the possibility of the pope being confronted by his fellow bishops and then, if he persists in heresy, to be declared deposed in the sight of God and the faithful by the very fact of his having fallen into heresy. As canonists teach, a heretical pope is deposed through the simple fact of being recognized as a public formal heretic by those who are competent ex officio to identify and proscribe heresy. This position was argued without demur by the recent and well-respected ecclesiologist Cardinal Charles Journet:

The action of the Church [towards the wayward pope] is simply declarative; she manifests that there is an incorrigible sin of heresy: then the authoritative action of God is exerted to sever the papacy from a subject who, persisting in heresy after admonition, becomes, according to Divine Law, unfit to hold the office any longer. So by virtue of the Scripture, the Church designates and God deposes. (L’Eglise du Verbe incarné. Essai de Théologie spéculative, 2:266)

Finally, the despairing and cynical comment: “What good is it?” deserves a response.

The fact that God is ultimately in charge of everything has never been taken as an excuse to do nothing. Would the Roman world have been converted to Christianity if no one had ever preached? Would the pagan world have come to know Christ without missionaries journeying to the ends of the earth? The quietists among us would seem to think that it is enough to “leave it to God”; let Him preach if He wants the world, let Him journey to its remotest corners. Obviously that is absurd. We must do all that we can for Christ and the Church, in whatever station we occupy, knowing that God will bless with fruitfulness any efforts that derive from His inspiration, correspond to His will, and promote His glory.

The question “What good is it?” sounds eerily like Pontius Pilate’s “What is truth?” True Christians have never been proportionalists or consequentialists. Their motto has been Mother Teresa’s famous remark: “God does not ask us to be successful; He asks us to be faithful.” Even so, we find supernatural success only among those who are faithful. David did not take a look at Goliath and say “Forget about it; outclassed by a few cubits.” He whipped out his little slingshot, picked up the five smooth stones, and let fly into the Philistine’s forehead. The giant was ultimately despatched with his own sword, to show that evil consumes itself—but only when human valor is at hand.

From those to whom more has been given, more will be expected. If we have been given to see a wolf in shepherd’s clothing, we are expected to do something about it. We will cry “Wolf!” to the vulnerable sheep, and pray fervently that other true shepherds will come to the rescue, in ways that we cannot. If they fail to do so, that is not our problem, but theirs to answer for.

Watch The John-Henry Westen Show, LifeSite’s new weekly commentary on the most important news in the Church and culture. Subscribe here to get an update every Tuesday when we release a new episode. You can watch the latest episode below, or listen to it here.