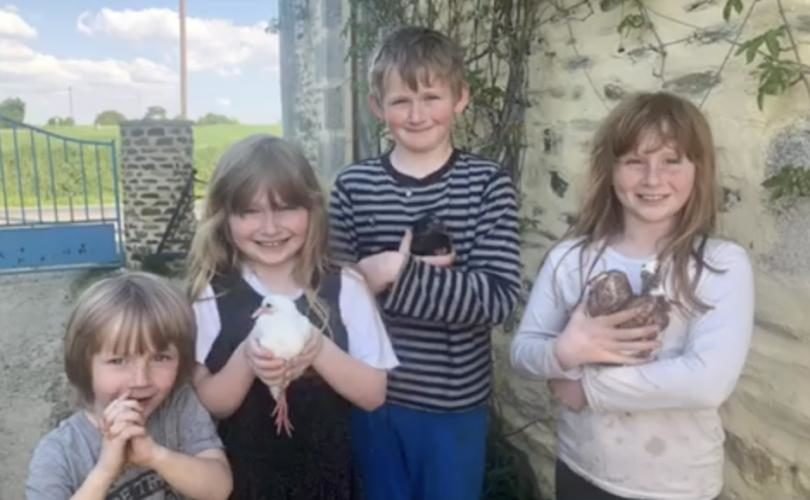 EDINBURGH, Scotland, June 18, 2021 (LifeSiteNews) — As a journalist, it’s my job to ask the questions. But last month someone asked me two heart-rending questions that that left me stammering.

The questioner was Clare Graham, the English Catholic mother of 10 whose six youngest were seized by the combined forces of the French police, the French court system, and the French social services, divided into pairs and sent to live with French and Algerian strangers.

You may remember the story; we published the latest episode today. It’s one of the saddest I have ever written for LifeSiteNews, and that’s saying something.

First of all, it’s sad because it’s about six powerless children deprived of their parents, their family life, and the practice of their religious faith.

Then it’s sad because of the contrast between the Great English Dream of living in the sunny French countryside and the nightmare of being maudits anglais caught in French red tape.

It’s sad because the Grahams first came to the attention of French social services when they took two of their sons out of public school to teach them at home and another parent squealed.

Naturally, it’s also sad because the social workers sneered at Clare for her Catholic faith and the size of her family.

And then, most tragically, it’s sad because when Clare and her husband David most needed to stand together against the state, they let each other down rather badly. In their defence, they had no idea what they were up against. They thought the issue at hand was about schooling. In reality it was about the power of the state versus the prerogative of parents, especially when the parents are English and at least one of them is a devout and determined Catholic.

Chances are, if you are reading this fluently, you belong to the great English common law tradition. You share with the English Grahams and Canadian me some basic assumptions about rights and freedoms. You believe parents have the right to determine the shape of their children’s education. You believe public servants are answerable to the public whose servants they are. You believe that when public servants, from the President of the United States right down to the pernickety clerk at the DMV or the MOT, act like bloody tyrants, journalists can be persuaded to hold their feet to the metaphorical fire.

You believe this because this is how it is—or how it is supposed to be—in Britain, the USA, Canada, Australia, New Zealand and all the other children of Magna Carta and the English parliamentary system. Unfortunately, this is not how it is in France. To paraphrase Forrest Gump, “It’s this whole other attitude towards society.”

Here’s an example. While reading my articles about the Grahams, you may wonder why there are no quotes from the social workers or mention of an attempt to reach out to them. You are right to do so. If this were a story about bigoted social workers in an English-speaking country, I would have contacted them straight off last month. And, indeed, it would be very easy for me to email the three women and one man who are currently making the Grahams’ lives a misery. I know their names; I have their email addresses. I know the judge’s name, too. I’d publish it in a heartbeat if it were up to me.

We don’t want to make things worse for the Grahams. We shudder at the thought of what this “worse” could be. Fortunately, LifeSiteNews has been able to put the Grahams in touch with a good French lawyer, a real fighter for justice. But I wonder how bad things will have to get for the Graham family before the British Embassy in Paris offers them real assistance.

In answer to her question, I told Clare that I couldn’t promise anything. We could tell the family’s story, and we could publicize the fundraiser for their legal fees (it’s here), “but how effective your story will be, I don’t know,” I said lamely.

“I just want them to come home,” she replied.

That’s what we want, too.

To ask the British Embassy in Paris what they can do to help the Graham children come home, please contact: