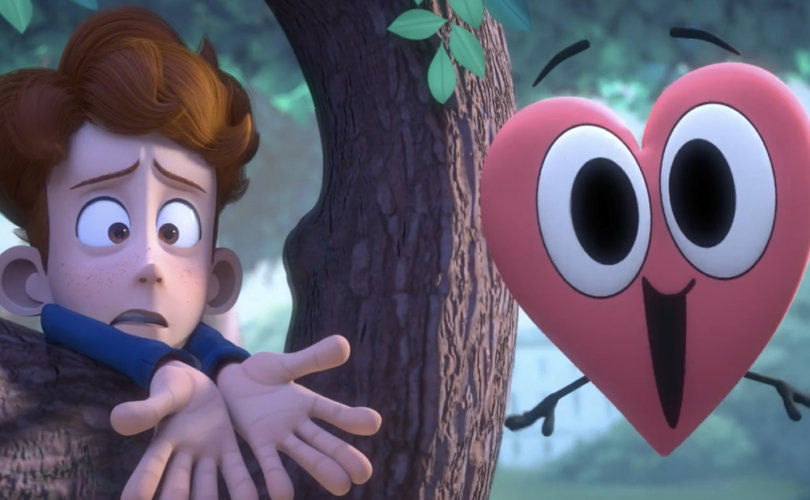 August 3, 2017 (LifeSiteNews) — In A Heartbeat, declared by millions to be “the cutest thing I’ve ever seen,” is a short animated video about a young boy's middle school ‘crush’ on another boy, currently melting a few million hearts around the world each day.

Posted on Monday, the four-minute video quickly went viral. By Tuesday afternoon, it had garnered 3.7 million ‘views.’ By late afternoon Wednesday, the number of views had doubled to 7.4 million. By Thursday morning, it was headed toward 11 million views.

On the one hand, it’s popularity is no surprise. It’s a totally engaging, masterfully crafted little film, bound to receive many film festival awards. And because there’s no dialogue, it offers global appeal and reach.

Yahoo’s movie reviewer cheered it, saying, “Hopefully, given the response the short film has gotten, major studios will take notice of the fact that LGBTQ stories should be told, and that no matter your sexual identity, people can relate to those first flushes of love.”

The LGBT Human Rights Campaign (HRC) and others are showering it with praise.

While many inside and outside the gay world may find it heart-warming, resonating with their own inner-awkward-middle-school-boy, there’s a problem with it. A big problem.

In a Heartbeat is getting a whole lot of attention but will do a disservice to those it aims to help. It will further undermine strong, healthy — extraordinarily necessary — male adolescent relationships. Once boys and adolescents are herded toward gayness in order to deal with the very common experience of social anxiety, directed to question their sexual orientation, their sexuality risks becoming ‘re-wired.’ And once 're-wired' in that way, it's hard to undo. I should know. I was one of them.

Before proceeding, watch the video:

An official description of the movie tells us, “A closeted boy runs the risk of being outed by his own heart after it pops out of his chest to chase down the boy of his dreams.”

The problem is this: The red-haired boy who is pictured is not a “closeted boy.” The animators may think they are portraying such a boy, but they are actually telling a completely different story.

They show us a boy who demonstrates an extremely high level of social anxiety. When we first see him, he appears scared to death. He’s nervous. He’s panting. He experiences heart palpitations. He jumps behind a tree to hide from the second, dark-haired boy, and by so doing demonstrates his debilitating discomfort and inability to relate to his male classmate.

And who is the kid he’s running from, but clearly attracted to? He’s a boy who displays any easy self-confidence — the type that all socially awkward boys envy and would like to be like. He appears unflappable, problem free, in complete control. He’s so cool he can even spin an apple on one finger while walking and reading on the way to school. The fact that the red-haired boy hides behind a tree to avoid him reveals just how unnerving his feeling of not being accepted by his male peers troubles him.

Let’s be clear: Shy boys at that age aren’t searching for romance with their same-sex peers. They want just one thing and they want it desperately: acceptance. At that age, acceptance is more valuable than gold.

‘In a Heartbeat’ is a dangerous distortion

The red-haired boy is not romantically attracted to the second boy, although that’s what the movie’s creators want you to think. He’s attracted to a boy who is his opposite, self-confident and trouble-free.

The movie’s creators misinterpret their own character: He’s not ‘closeted’ and he’s not “outed” by his own heart.’ He simply experiences a very high degree of social anxiety.

And the answer for this young man is not ‘romance’ with another boy. The answer is acceptance — to develop and persevere in friendship, and in that to find acceptance.  Romance between males is a mirage, always proving to be elusive.

The movie promotes escaping social anxiety disorder by “coming out” and being “gay.”  But this is an escape from the disorder, not a means of healing it in order to become whole and healthy as a person.

Dr. Richard Fitzgibbons, an expert on marital and child healing, told LifeSiteNews that the movie is “psychologically harmful to youth — not helpful to kids experiencing social anxiety disorder.”

Yet it is precisely those kids the movie is aimed at, and they are the ones put at risk by the narrative it promotes.

According to Dr. Fitzgibbons’ ChildHealing.com website, “Social Anxiety Disorder (SAD) is the most prevalent of all anxiety disorders. A 2011 study of 10,000 American adolescents revealed that anxiety disorders were the most common disorder in youth, occurring in approximately one-third of adolescents.”

Most important, “Research has shown that youth suicide risk decreases by delaying self-identifying as a homosexual. One study demonstrated that suicide risk among youth with same-sex attractions decreases 20 percent each year they delay labeling themselves as gay.”

Quentin Crisp, in his novel The Naked Civil Servant, identified the conundrum facing gay men: “If the Great Dark Man met me, he would not love me. If he did love me, he could not be my Great Dark Man.” In other words, Crisp is saying: “If I found the man of my dreams” — as the boy in the ‘Heartbeat’ video seems to — “no matter how attractive, masculine and virile; if he were interested in me either sexually or romantically or both, he could no longer be the man of my dreams because he would no longer be 100 percent ‘straight.’ There would be a huge chink in his armor, and he would disappoint me.” One senses the snickering of Satan somewhere in the wings behind the hopeless, discouragement-fraught dreams of many gay men. No wonder so many become depressed. This is also why same-sex marriage will evaporate over time.

Michael Glatze, now a Christian pastor and subject of the movie, I Am Michael, was a practicing homosexual and gay activist until he experienced conversion to Jesus Christ. In 2013, he married his wife. In an open letter to Ricky Martin after Martin came out, Glatze wrote, “Homosexuality is a cage in which you are trapped in an endless cycle of constantly wanting more — sexually — that you can never actually receive, constantly full of emptiness, trying to justify your twisted actions by politics and ‘feel good’ language.”

He also told his own former “lover”: “God loves you more than any dude will ever love you. … Don’t put your faith in some man, some flesh. That’s what we do when we’re stuck in the gay identity, when we’re stuck in that cave. We go from guy to guy, looking for someone to love us and make us feel OK, but God is so much better than all the other masters out there.”

The world today, influenced heavily by the LGBT community and an undiscerning media, undermines close relationships between adolescent males, causing them to question their romantic and sexual orientation. This is precisely what this video sets out to do and is why it is so dangerous.

Can’t a kid just really like another kid without it being interpreted as either romantic or sexual? ALL boys want close friendships with other boys. It’s a basic human need.