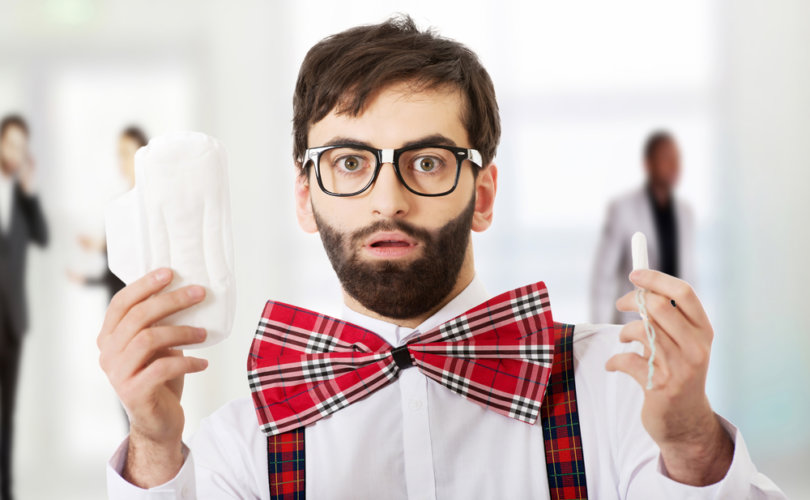 January 15, 2020 (LifeSiteNews) – In Iran, thousands of young people are taking to the streets, demanding that their authoritarian Islamic leaders step down. They are doing this fully knowing that they may pay dearly for speaking out. In Hong Kong, hundreds of thousands of people have been protesting for months, and despite brutal police crackdowns, the demonstrations have barely slowed. With the spectre of Red China looming over them, these freedom-fighters know precisely what is at stake both for them and their children.

And in the U.S., NBC is faithfully recording the struggle of America’s youth, which, while very different, is still definitely unprecedented. Consider the story of “Kenny” Ethan Jones, a “transgender model and activist.” According to NBC, when Jones “experienced his first period, he faced both physical and psychological pain. Initially, Jones, who had not yet come out as trans at the time, felt like he was losing control and didn’t understand what was happening to his body.”

In fact, Jones told NBC, the experience was bewildering: “I didn’t believe that having periods would be a part of my lived experience. I felt isolated; everything about periods was tailored to girls, yet me, a boy, was experiencing this and nothing in the world documented that.” Now, NBC solemnly reported, “He currently experiences a wide range of challenges with his [sic] monthly bleeding, especially when it comes to getting his hands on menstrual hygiene products.”

You might be reading this and thinking—wow. A boy who gets a period. That would be horrifying and confusing and traumatizing. But of course, this story is much simpler than that. Jones is a biological female, which is why she gets her period. Boys don’t get periods. Regardless of the fact that NBC is willing to air transgender propaganda, the fact is that everything about this story makes sense once you realize that Jones is female and simply identifies as male. The thing is, identifying as male doesn’t make you male. That’s why Jones still gets her period.

But the state of the mainstream media is such that NBC actually used Jones’s story to segue into an entire report on men who menstruate and the challenges that they face. It is a sad state of affairs, they report, when men who get their menses are forced to purchase girly pink packages: “Some transgender and gender-nonconforming people who menstruate, like Jones, say when the products are categorized as women’s products, they can feel alienated — and may even avoid purchasing them altogether.”

This stigma, says Jones, must be fought, because unfortunately many “[p]eople are still reluctant to the idea that it’s not only women that experience periods.” These attitudes—the unsurprisingly widespread belief that women have periods and men do not, that is—must be eliminated, because they are preventing men from accessing tampons and other hygiene products. “Men’s restrooms typically don’t even have places to throw away menstrual products within a stall,” one trans activist mourned. “We have to discard them in a trash can in the common area of the restroom or even outside of the restroom.”

NBC even quoted from a group that champions for “menstrual equity”:

Jennifer Weiss-Wolf, founder of Period Equity, which advocates for affordable and accessible menstruation products, said, “Anyone who menstruates needs to be part of the discussion and decision-making about their own health and well-being.”

The answer to all of this, the media, trans activists, and Democratic politicians seem to agree, is the elimination of “transphobia” and the attitudes you picked up in Grade 7 science class. It is 2020, and men can now get pregnant, suffer from menstrual cramps, and run out of tampons, so they have quite enough on their minds without having to put up with the bigotry of people who are just now discovering that everything they have believed about reality for their entire lives is apparently a brand-new form of prejudice. The struggle is real.

Jonathon’s new podcast, The Van Maren Show, is dedicated to telling the stories of the pro-life and pro-family movement. In his latest episode, he interviews Terry Schilling, Executive Director of the American Principles Project, an organization dedicated to supporting family values and their expression in politics. Today’s episode delves into the debate surrounding governmental regulations on pornography, the arguments from various sides, today’s laws, and what we can do to protect our children and save our culture. You can subscribe here and listen to the episode below: