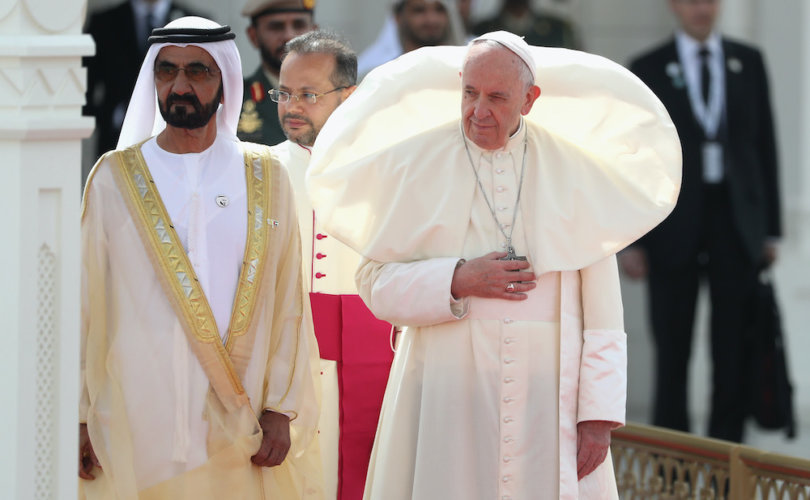 October 5, 2020 (LifeSiteNews) – Pope Francis, in his new encyclical Fratelli Tutti, makes statements that seem to promote religious indifference and the view that different religions are in themselves good and pleasing to God. He claims that “we, the believers of the different religions, know that our witness to God benefits our societies,” thereby implying that non-Catholic religions can “witness to God.” Furthermore, the Pope only speaks about salvation with regard to medical emergencies such as the coronavirus or poverty, but not with regard to the salvation of souls.

Pope Francis covers in his 200-page document that is divided into eight chapters many secular topics such as poverty, wars, the atomic bomb, the death penalty, immigration, fear, and the coronavirus, as well as the need to increase international fraternity and collaboration. But when it comes to matters of the faith, he seems quite disinterested in defending the uniqueness of the Catholic Faith and its necessity for the salvation of souls.

The Pope explicitly states that he had been “encouraged” to write this document “by the Grand Imam Ahmad Al[-]Tayyeb, with whom I met in Abu Dhabi, where we declared that ‘God has created all human beings equal in rights, duties and dignity, and has called them to live together as brothers and sisters’.” That controversial document of Abu Dhabi also contains the statement that the “diversity of religions” is “willed by God,” a statement that had provoked Bishop Athanasius Schneider to issue a public critique of it, asking Pope Francis to correct it publicly.

In his new document, Pope Francis argues that each country should preserve its own cultural foundation, seemingly rejecting the idea of going out and “converting all nations” to the Catholic Faith. “A country that moves forward while remaining solidly grounded in its original cultural substratum is a treasure for the whole of humanity. We need to develop the awareness that nowadays we are either all saved together or no one is saved.” (137)

Here, he does not speak of salvation in religious and supernatural terms, but, rather, of a survival of the nations as such.

When writing in the eighth chapter on fraternal relations among religions, Pope Francis endorses a sense that all religions are good and even can “witness to God.”

“From our faith experience and from the wisdom accumulated over centuries,” he writes, “but also from lessons learned from our many weaknesses and failures, we, the believers of the different religions, know that our witness to God benefits our societies.”

How can a religion that does not adore the Holy Trinity or acknowledge the Incarnation of Jesus Christ as the Son of God, give “witness to God,” one may ask.

Here, we remember that Bishop Schneider, in a recent September 20 interview with Gloria.tv, insisted that “there is no other way of salvation” than “Jesus Christ,” and that the other religions “are not willed by God.”

“All are called to believe in Jesus Christ,” Bishop Schneider stated. Prayers that are not directed to Jesus Christ are, according to this prelate, “not willed by God,” and so one should invite other religions to “pray to Christ.” When discussing the Freemasonic goal of a universal fraternity, Bishop Schneider also reminded us that we are “what Christianity had brought us, brothers in Christ, children in God.” That other concept of fraternity is a fraternity on a “mere natural level.”

Pope Francis goes so far to claim that God is pleased with, and actively involved in, other religions when he states that “the Church esteems the ways in which God works in other religions, and ‘rejects nothing of what is true and holy in these religions…’” Further insinuating it to be fine that different religions have different sources of inspiration and faith, the Pope writes later: “Others drink from other sources. For us the wellspring of human dignity and fraternity is in the Gospel of Jesus Christ.” Does this mean, one may ask, that it is beneficial and good for others to “drink from other sources”? After all, Pope Francis, after making this statement, does not bemoan this fact.

Pope Francis also once more defends the concept of the human right of “religious freedom,” something that has come into the Church with the Second Vatican Council. “One fundamental human right must not be forgotten in the journey towards fraternity and peace,” he writes and then adds: “It is religious freedom for believers of all religions.” (279)

It was here, once more, Bishop Schneider who has insisted that the concept of religious freedom is alien to the Catholic tradition, inasmuch as there cannot be declared a human right to choose a wrong religion. Here, the aspect of tolerance comes in; the Church or a Catholic ruler tolerates other religions, but one cannot positively state that one has the right to choose a false religion. In Schneider's view, this concept has actually led to the Pachamama worship of last year in the Vatican Gardens. Schneider said last year: “you have no right to choose idolatry, you have no right to offend God,” through “idolatry or through blasphemy.”

He continued: “This is already rooted here [in the Vatican Council]. If you have a right by God given to you, by nature, also to be able to choose acts of idolatry – like the Pachamama – when it is rooted in your dignity of man even to choose a Pachamama religion: this is the last consequence of this expression of the Council text [Dignitatis Humanae].”

To return to Fratelli Tutti, chapter eight. Here, the Pope claims that God loves each person “regardless of religion.”

“Even if they are atheists, his love is the same,” he adds, without differentiating that, while God loves everybody on earth and wishes everybody's salvation, He will not receive them into Beatitude without that certain conditions – such as the living of the Ten Commandments – are met. On the contrary, Pope Francis indicates that many might be saved who are atheists or of other religious backgrounds, when he then adds: “When the last day comes, and there is sufficient light to see things as they really are, we are going to find ourselves quite surprised.” (278)

Is it possible to be concerned for truth, to seek the truth that responds to life’s deepest meaning? What is law without the conviction, born of age-old reflection and great wisdom, that each human being is sacred and inviolable? If society is to have a future, it must respect the truth of our human dignity and submit to that truth. Murder is not wrong simply because it is socially unacceptable and punished by law, but because of a deeper conviction. This is a nonnegotiable truth attained by the use of reason and accepted in conscience. (207)

That is to say: Pope Francis does not state that society “must respect the truth about our salvation and submit to that truth,” but he merely states that society must submit to certain moral truths such as that murder is wrong. In this limited way, Pope Francis even admits that intrinsically evil acts are always evil, as stated by John Paul II and quoted by this new encyclical: “when it is a matter of the moral norms prohibiting intrinsic evil, there are no privileges or exceptions for anyone.” (209)

But Pope Francis makes no such claim about the truth of the Catholic Faith, something that one would expect from a Pope.

With regard to such universally valid moral laws – where he does not use the concept of the natural law – Pope Francis, when then putting it into the context of religion, insists that such truths may not lead to “one moral system.”

As believers, we are convinced that human nature, as the source of ethical principles, was created by God, and that ultimately it is he who gives those principles their solid foundation. This does not result in an ethical rigidity nor does it lead to the imposition of any one moral system, since fundamental and universally valid moral principles can be embodied in different practical rules. Thus, room for dialogue will always exist. (214)

In a first response to Fratelli Tutti, Archbishop Carlo Maria Viganò wrote in a text for the Italian journalist Aldo Maria Valli that “the supernatural dimension is totally absent.” He even goes so far as to state that when reading this document, “everyone would be led to believe that it was written by a Freemason, not by the Vicar of Christ.” The Italian prelate sees here a “vague deism and a philanthropism” at play that “has nothing Catholic in it.”

“The supernatural dimension is totally absent, just as absent is the reference to the necessity of belonging to the Mystical Body of Christ which is the Holy Church in order to achieve eternal salvation,” Viganò writes, adding that “there is a serious distortion of the concept of ‘brotherhood’: for a Catholic, this is only in Christ possible, if one has God as the Father, through Baptism,” while for Pope Francis, this “would be realized by the mere fact of belonging to humanity.”

Similar to Bishop Schneider, Archbishop Viganò also criticizes the concept of religious liberty; instead, one should speak of the “divine right of the Church to freedom of worship, preaching, and government.” Instead, the Second Vatican Council replaced this divine right with the “right to spread error not only in general, but even in Christian nations.” However, “the rights of truth cannot be bartered by granting rights to error,” the Italian prelates continued. “The Church has the right to freedom, while false religions do not.”

For Archbishop Viganò, this new papal document might receive “the applause of God’s enemies, but it confirms the inexorable abandonment of the Church’s evangelizing mission.”