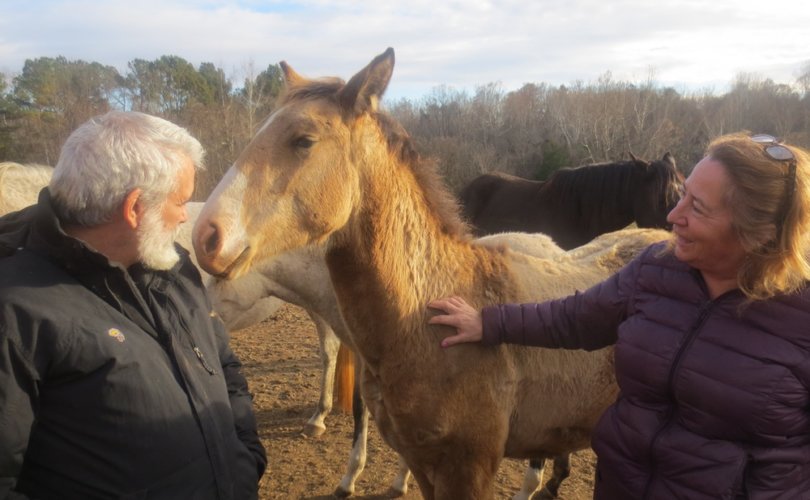 Dr. Robert Malone and his wife Jill at home on their farm in VirginiaMaike Hickson

FRONT ROYAL, Virginia (LifeSiteNews) —As our readers might know, LifeSiteNews recently published an interview with Dr. Robert Malone, in which we discussed not only the arguments against lockdowns, mask mandates, and vaccine mandates, but also Dr. Malone’s support for Archbishop Carlo Maria Viganò’s call for an Anti-Globalist Alliance. Dr. Malone, the original inventor of the mRNA vaccine technology, also strongly criticized the Austrian government which is now establishing a vaccine mandate for the entire Austrian population, saying that these men “have gone mad.”

The virologist’s comments in support of Viganò, especially, were so well received that Steve Bannon of the War Room played LifeSiteNews’ video of this interview and invited Dr. Malone on the show to discuss this topic.

The full transcript of this interview can be viewed here.

In light of this fruitful work, my husband, Dr. Robert Hickson, thought it would be a lovely idea to honor our children for their part in this interview. After all, they were involved in this project from the beginning.

Let me tell you this story.

I had originally planned to visit the Malones on the Saturday after Thanksgiving, just as a friendly visit, because I like them very much and because, as I told them, I wanted to express my gratitude and admiration. They both – Robert and Jill – are a lovely couple who work closely together in everything they do. Jill herself is also educated in the field of science; she has a PhD in the natural sciences. Thus, they have gone through all these years together, and now even more intensely, since Dr. Malone, in June of this year, started to come out with objections and questions about the official COVID responses, nationally and world-wide.

Then, two days before I was to embark from Front Royal on my little trip with Isabella (13) and Robby (11) at my side, Albert Engelmann, editor-in-chief of the Austrian Catholic newspaper Der Dreizehnte, had the spontaneous idea of asking me if I could interview Dr. Malone for his newspaper – of course especially considering the terrible development in his country. How could I say no in such a situation of need and, of course, because LifeSiteNews had also discussed interviewing Dr. Malone once more. (Jim Hale had already conducted an interview with Dr. Malone at his horse farm in warmer weather, surrounded by the lovely horses the Malones are breeding.) The problem was only that I am not well equipped to do video interviews. I am just a homeschooling mom trying to help the Church in distress.

So, Isabella and Robby got to thinking and came up with the idea of taking my little recording machine – which I once bought so that we could record my husband’s recollections of his rich life – and attach to it a little microphone that we have on our computer. Then we gathered my little Canon camera with which I take all our family photos. And Isabella took along her own little camera, with which she likes to take photos of her friends.

We had no idea how it would work.

First, upon our arrival at the farm, the Malones and we spent a lovely time eating the cake that Isabella had baked for the occasion. When the Malones asked how she made her crust, she spontaneously – and honestly – answered: “I forgot about the cake in the oven!” That was a funny answer, for sure.

Then, before going into the interview, the Malones led us down into the pasture to their horses. They are Lusitanos, a Portuguese breed, just beautiful animals.

Before we knew it, we were surrounded by ten or twelve of them peacefully investigating us and greeting their owners. I felt as if I had swum into a school of fish! It was a special and peaceful moment, indeed. Robert Malone kindly taught us how to greet a horse: by breathing onto his mouth and by scrubbing along his neck, just as horses do among each other when they want to show that they are friendly. After Robert had fed his horses, we returned to the Malone home to start the interview.

Our Isabella set up the different machines, and then she told me how to push that one button on the recorder and start the interview. At the same time, she started filming the interview by holding up my small camera with her hand.

At some point in the conversation – and our readers might hear it in our “amateur video” – Isabella told me that the battery of the camera had run flat. Well, yes, that camera had been a gift from my husband about six years ago, so I guess the battery needed replacing. I told Dr. Malone we would just keep on going, since we had the recording. Little did I know that Isabella had not given up.

Without my knowledge – I was concentrating too much on the interview – she pulled out my flip phone (yes, dear readers, as you can tell, my family tries to steer away from some of the modern technologies), as well as Isabella’s camera, and then both children held up their hands to film Dr. Malone speaking to me.

At the end of the interview, Jill Malone told Isabella: “You deserve a gold medal!” It seems she had once been in such a situation herself and knows how hard it is to film for a longer period with a camera in one’s hand.

To be honest, I myself had not even thought of it!

So here we are. We present to our readers a video recording of the interview with Dr. Robert Malone, speaking about the lockdowns, the vaccine mandates, mutating viruses, Austrian governments that have gone mad, and Archbishop Viganò, and all essentially produced by the youngest LifeSiteNews video team! As you will see, it is obvious that it was made by children with increasingly tired hands. But we did not want their work to go to waste, and we wanted to honor them for it.

Thank you, Robert, for inspiring this little report, and thank you, Isabella and Robby, for making this video possible.

And last, but not least, a big thank you to Robert and Jill Malone for all their work and for giving us such a special occasion to visit with them.