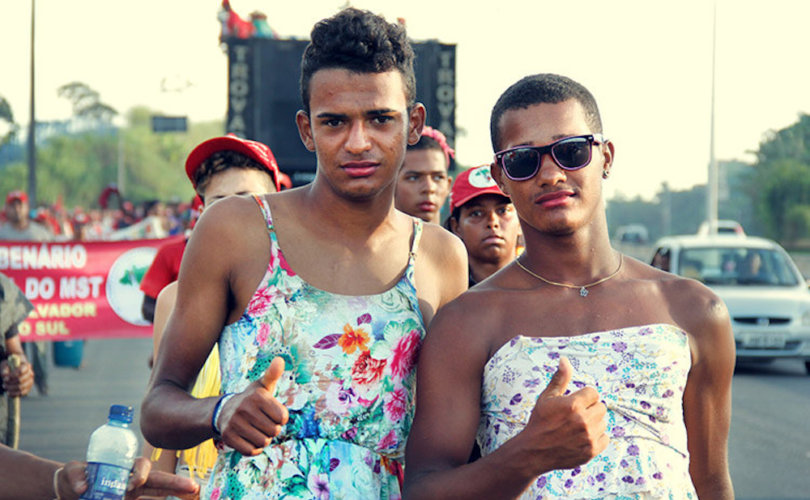 "Transsexual" youth depicted by a Development and Peace partner attend an LGBT march.

July 12, 2018 (LifeSiteNews) — I’m often told, when I address the transgender ideology, that it is an exaggeration to claim that trans activists actually wish to impart their ideology to children. Surely, people say, all trans activists really want to do is help teenagers who are grappling with genuine issues of gender identity and confusion—and thus to claim that trans activists wish to impart or apply their ideology to young children is simply fear-mongering. I wish that were the case, but a survey of the evidence indicates that this analysis is about facts, not fearmongering.

To illustrate just how radical the transgender ideology is, consider some advice given to parents at a 2016 conference (attended by over 400) people by Dr. Diane Ehrensaft, who is a developmental psychologist and the author of The Gender Creative Child. She is one of the key proponents of determining a child’s gender through careful observation, followed by affirmation of whatever the child says or acts upon—including very early transition, if that happens to be the case. She is a very influential figure within the trans movement, sitting on the board of directors of Gender Spectrum, a San Francisco trans advocacy organization, as well as serving as the director of the University of California-San Francisco children’s hospital gender clinic.

If you would like to understand what the transgender movement is all about, you can watch the 2016 Jon E. Nadherny/Calciano Memorial Youth Symposium in its entirety. The guest speakers bluntly lay out their agenda and explain how they are capturing the hearts and minds of the next generation, resulting in both sky-rocketing numbers of trans-identified youth as well as young people supportive of the trans ideology. One speaker showed a cartoon that had one parent asking another parent who was pushing a stroller whether her child was a boy or a girl. “I don’t know,” the mother replied. “It can’t talk yet.” It wasn’t meant as a joke.

After Ehrensaft’s presentation, one mother stood up to ask how best to “explain gender to a three, for, and five-year-old? My daughter asks a lot of questions about gender expression and identity without knowing what she’s asking, but I don’t quite have the language to talk to her about it…Is that a boy, is that a girl, what does it mean to be a boy, what does it mean to be a girl? Is it because they have a penis? Is it because they have a vagina? And I don’t quite know how to use language to talk about gender…” Dr. Diane Ehrensaft’s answer gives a clear picture of how trans activists wish to impart the ideology of gender fluidity to children:

First of all, in terms of the question is that a boy or is that a girl, I would say we don’t know—we’ll have to ask them. So that would be the start, that only they know for sure. Some people like to be asked and some people don’t. I’d say you know, some people think (because by three you’re learning) that if you have a penis you’re a boy and if you have a vagina or a vulva you’re a girl, but actually it’s not like that. It’s not like that at all. If you’re a boy it’s because your mind is telling you I’m a boy. If you’re a girl it’s because your mind is telling you you’re a girl. Some girls like to wear dresses and some girls like to dress as Darth Vader—that’s a people thing, but there are some people where we live who think one thing is a boy thing and one thing is a girl thing. So there is a teaching moment there. Kids by three know their culture. Remember I said gender socialization starts at two? So we have to sometimes unsocialize those messages with new messages. Then the next thing is: Some people think there is only two genders. But there is lots and lots of genders—it’s just like a rainbow. It has all different colors. And then I’d stop there because that’s almost way too many words already for a three-year-old.

There you have it, in her own words: Children must be “unsocialized” out of antiquated beliefs such as the idea that men have penises and women have vaginas, or that there are only two genders. Instead, children as young as three years old are to be told that you can be whatever you decide to be, regardless of biological reality. When children meet adults who have not yet relinquished common sense, they will be gently introduced to the concept of transphobia.

Ehrensaft’s views do not simply extend to children between the age of toddler and kindergarten, either. A father stood up to ask her another question: “A very strong message people have been talking about this morning is listening to the child, and letting them tell us. I’m just wondering if there are recommendations for pre-verbal children, so between the ages of one and two, suggestions for how to approach the topics that we’re talking about today?” Unsurprisingly, Ehrensaft had advice regarding “pre-verbal children” who can’t talk yet, too:

So the question is, what about the kids between one and two who are just developing language, or may not have it yet? They’re very action-oriented. This is where mirroring is very important, and listening to actions. So let me give you an example. I have a colleague who is transgender, and there is a video of him as a toddler—so he was assigned female at birth—there is a video of him as a toddler tearing barrettes out of then-her hair and throwing them on the ground and sobbing. That’s a gender message! And when it happens not just once or twice or three times, that’s a gender message. Sometimes kids between the age of one and two with beginning language will say “I boy!” when you say girl. Those two words: “I boy.” That’s not a pre-verbal, but an early verbal message. Sometimes there is a tendency to say, well honey, no, you’re a girl, because little girls have vaginas and you have a vagina so you’re a girl. And then when they get a little older you’ll hear them say: Did you not listen to me? I said I was a boy with a vagina. But they can’t say that between one and two, but they can show you by what they want to play with, and if they feel uncomfortable about how you are responding to them and their gender if you are misgendering them. So you look for those kinds of actions, like tearing a skirt off. There was one, I think this was in the Barbara Walters special, where this child wore the little onesies with snap-ups in between the legs, and at age one would unsnap them to make a dress and have the dress flow. This was a child who was assigned male. That’s a preverbal communication about gender, and the message back should not be to negate any of those expressions, but to go with them and see where they go. So that’s my sense about the one to two-year-olds. Children will know as early as the second year of life. They probably know before, but they’re pre-pre-verbal.

In Ehrensaft’s view, a child throwing a tantrum and pulling out her barrettes, or a boy opening his onesie, or children simply playing make-believe—these are all reasons to believe that your child may not be the gender they were “assigned.” Despite evidence telling us that up to 80% of children who genuinely do struggle with gender dysphoria will later grow out of it, and the incredible danger that physical and chemical mutilation poses to the physical and mental well-being of children who decide to transition at a young age (which is already giving birth to the phenomenon of “detransitioning”), Ehrensaft advises parents to be on the lookout for signs that their child might actually be of the opposite gender—or any of an assortment of different genders, some of them yet unnamed and presumably undiscovered.

Trans activists are especially focused on young people because they rightly feel that indoctrination is more effective at a younger age. The fact is that experts like Ehrensaft are the ones informing new sex-ed curriculum for schools, new governmental policies, and new social responses to the transgender ideology. In her view, her ideology applies even to children under the age of five, including those who are “preverbal.” Most parents are unaware of what activists like Ehrensaft believe and teach, but it is incredibly important for people to be aware of what this ideology constitutes, and to find out whether it has infiltrated the curriculum of your local schools, as well.

Trans activists are waging a war for the hearts and minds of the next generation. Don’t fool yourself: That means your children, too.

‘I’m not an isolated case’: Doctor fired for refusing to use trans pronouns speaks out

How to get started opposing the transgender movement