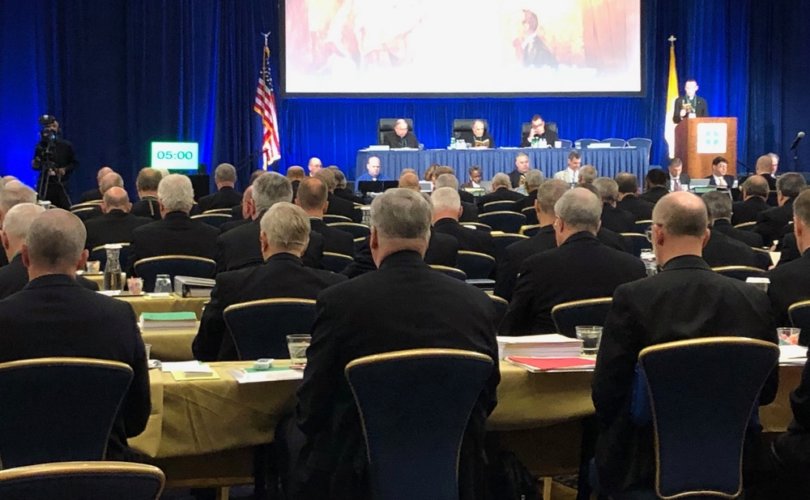 BALTIMORE, Maryland, June 14, 2019, (LifeSiteNews) – On the final day of their general assembly, the United States Conference of Catholic Bishops (USCCB) addressed issues surrounding bishop accountability in the context of the sex abuse crisis which had been waylaid by Pope Francis’ intervention last November.

“Last night at the end, Bishop Coyne had given me a reminder [that] it’s important that during all of our voting, particularly yesterday when we worked on the question of third party reporting,” said DiNardo, “anybody can report even now to a Metropolitan or to the Holy See if there’s a bishop they want to deal with in light of sexual abuse.  So what we voted on last night was to facilitate what they can already do.”

“That will be true this morning, too, in [our] voting,” he added.

The United States bishops then focused their attention on three major documents, which serve as their response to the crisis of priest and prelate sexual abuse and coverup, a crisis that especially came to a head in the U.S. Church a year ago.

While the bishops clearly seemed satisfied that they had made major progress, it is unclear if their work begun last fall to deal with the scourge of clergy sexual abuse—especially within their own ranks—represents any substantial change.

They essentially voted on … what they can already do.

“Last November, we committed ourselves to advance whatever is needed to assure our Catholic faithful of accountability for bishops,” said Boston’s Bishop Robert P. Deeley.

“Today we can take clear and concrete steps to put that commitment into practice,” said Deeley, urging his fellow bishops to vote in favor of the measure.

The protocol simply brings together the instruments in canon law already available to diocesan bishops for imposing limitations on bishops who are either retired who have been removed from office for ‘grave’ reasons.

Indeed, every tool cited in the document aimed at restricting the public life of errant bishops—prohibiting the hearing of confessions, administering confirmations and weddings; limiting retirement funding (travel and secretarial assistance), and even being denied participation in USCCB general assemblies—is already available to the bishops.

The bishops then voted to approve a document titled, Acknowledging Our Episcopal Commitments, in which the U.S. Bishops take full responsibility for scandalous behaviors and practices which were allowed to fester for decades.

However, the document is ‘catechetical’ and ‘promissory’ in nature, amounting to not much more than a statement of good intentions.

“Some bishops have failed in keeping to these promises by committing acts of sexual abuse or sexual misconduct themselves,” states the document.  “Others have failed by not responding morally, pastorally, and effectively to allegations of abuse or misconduct perpetrated by other bishops, priests and deacons.  Because of these failures, the faithful are outraged, horrified, and discouraged.”

“We, the bishops of the United States, have heard the anger expressed by so many within and outside the Church over these failures,” continues the document. “The anger is justified; it has humbled us, prompting us unto self-examination, repentance, and a desire to do better. We will continue to listen.”

The regret appears to be heartfelt, but not much more than that.

Perhaps the most significant aspect of the document is the bishops’ promise to make themselves subject to the Dallas Charter from which they had previously been exempted, and to the Holy See’s recently issued guidelines, Vos estis lux mundi, regarding clerical sex abuse and episcopal accountability.

“We pledge our full support for and adherence to the provisions outlined in the Holy Father’s Apostolic Letter Moto Proprio, Vos estis lux mundi (“You are the light of the world”), which holds bishops accountable to higher moral standards because the pastoral care of the faithful has been entrusted to them.”

Yet again, the sum total of the document is an apology for the past and a promise to do better. While Vos estis lux mundi allows for lay involvement in investigating bishops, it does not require it.

Identifying the anemic nature of the effort perceived by many, Bishop W. Shawn McKnight (Jefferson City), stood and said, “We all feel the necessity, when we go home, of being able to tell our people—and especially our priests—that we have done everything we are able to do to respond to this crisis.”

“Lay involvement should be mandatory to make darn sure that we bishops do not harm the Church in the way bishops have harmed the Church, especially what we have become aware of this past year,” added McKnight.

After the Holy See produced Vos estis lux mundi in May, the USCCB endeavored to develop a document with directives for implementing its provisions. The directives included the following points:

However, Bishop Robert P. Deeley, Chairman of the Committee on Canonical Affairs and Church governance which developed the document noted that these are “proposed directives” and “are not intended to establish particular law for the United States.

While the Vatican and the USCCB have high hopes for assigning investigations regarding bishop sexual misconduct to Metropolitans, the USCCB’s lay advisory councils continue to express strong reservations against the system because it does not with finality prevent ‘bishops policing bishops.’

“The Metropolitan should not be the sole gatekeeper of allegations,” said Francesco Cesareo, Ph.D., Chairman of the National Review Board (NRB) on the opening day of the general assembly.  “This could lead to the same type of mishandling of an allegation as we saw in the case of former Archbishop McCarrick.”

Cesareo noted that while the Moto Proprio allows for the inclusion of laity in investigations, “This must be the case in the United States, through the establishment of a lay commission either on the national or local level.”

“You have a great opportunity to lead by example, and to help show dioceses and episcopal conferences around the world, not only how important it is for lay involvement to ensure greater accountability and transparency, but also how laity and the episcopacy can be co-responsible for the Church’s well being,” said Cesareo.