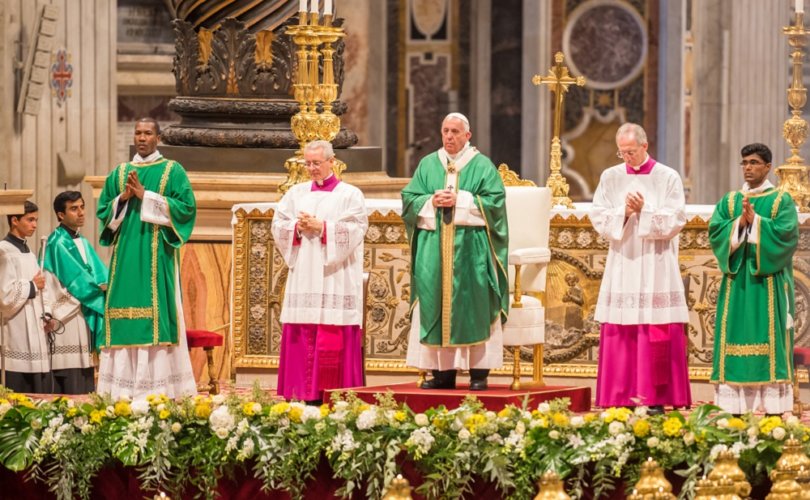 Editor’s note: Our Scotland-based reporter, Dorothy Cummings McLean, has been sent to Italy to join our Rome correspondent, Diane Montagna, in covering the Synod for the Bishops of the Pan-Amazon Region. A lifelong diarist, Dorothy has volunteered to give readers a glimpse into life off-camera as she carries out what she calls “a dream assignment.” Read all of her Amazon Synod diary posts HERE.

George Neumayr’s Rome diary is gloomier than mine, but then I’m staying just around the corner and down the street from a flower shop. Also, I heard a wonderful story today about the homeless people of St. Peter’s Square. Downloading video demands such a strong signal that LifeSiteNews reporters working late in Rome often just sit outside the Vatican press office to use its wifi. When my colleague Jim was there this evening, one of the homeless camped out under its portico gave him a piece of cardboard to sit on.

This morning, I went to Mass and then the café-bar for my five-minute cappuccino stop. Then it was back to writing all morning and hurrying to the Sala Stampa for the synod press conference. There were many more South American journalists today; they kept mistaking me for someone who would give them their press passes. There was also the usual gang of anglophones: Michael Voris, Edward Pentin, et alia.

But first Paolo Ruffini, the prefect of the Dicastery for Communications, told us that the general statements by the synod members had been completed on Wednesday, and the members were now in the “small circles” or language groups.

On Wednesday, Pope Francis had contributed to the statements by saying which themes he had found helpful. The whole general discussion has been revolving around interrelated themes like ecology, sustainable versus unsustainable development, violence,  “changing the paradigm” (ominous), evangelization, “the way to be the Church in the Amazon”, lack of vocations, non-ordained ministries for laypeople, women, formation, and the role of deacons.

Fr. Costa, secretary for the Commission for Information, said both that we have to keep the focus on the Amazon region and that the discussion could have an impact on the whole Church. On October 17, a report from the “small circles” will be available, so stay tuned.

Sister Liliana Franco Echeverri, a youthful, joyful woman in plainclothes, spoke first about the work of Latin American religious and said they have to live out their missionary vocation with joy, walking with the Church and in the Church to a “new way” of being Church. She spoke of the Church having a “new face,” the face of poverty, and said there should be an option for integral ecology.

Sister Liliana’s face shone, and there were murmurs of assent among the press corps. I felt a bit shrewish, therefore,  pondering A. that this sounded like that dodgy hymn about “singing a New Church into being” and B. that the Church has always had the face of poverty. The postwar prosperity enjoyed by the global North is relatively new. Servant of God Dorothy Day was attracted to the Catholic faith because it was the Church of the 20th-century American poor.

Bishop Medardo de Jesús Henao del Río, apostolic vicar of Metù and titular bishop of Casae Medianae, described the remote area in Colombia where he has ministered. It is a large area with a sparse, widely spread out population, troubled by guerrillas and drug-trafficking, lacking schools and medical care. He told the story of a woman in the area who had to do a caesarian section on herself, miraculously saving both her and her baby’s lives.

The bishop said one of the tasks of the Church was to help these poor people against multinational companies that exploit the area, polluting the water and leading to native children being born with birth defects.

He described having ordained a deacon in two rites — Catholic and indigenous — although it was unclear from the translation chirping in my ear what he meant by that. Apparently, the indigenous people have rituals that they say must be accepted by the Church. Hopefully, we’ll be hearing more about what these rituals are later.

Wilmar Santin, bishop of Itaituba in Brazil, described the history of his region and shared that Pope Francis had told him that he had a dream to see an indigenous priest in every village. Pope Francis had told Santin to “start with what the Church already gives you,” so he is keen on ordaining married indigenous men as permanent deacons. A first step is to form Ministers of the Word, however, and now he has 48 indigenous lectors, who preach in their own languages, in his area.

The first question from journalists concerned the growth of Protestant Evangelicalism in the Amazon region. Bishop Santin had described the relationship between Catholic and Baptist missionaries as very good. Now, however, he mentioned that Pentecostals had been coming to his region, and many of their pastors had been “very aggressive” against the local culture, discouraging their use of their own language and such customs as body-painting.

“These people don’t understand anything about the Munduruku culture, and still less about the Gospel,” he said.

The lack of a permanent Catholic presence in the area leads people hungry for the Word of God to join whatever Christian group is available.

The headline-making question, though, was that of Il Messagero to the panel about infanticide among the indigenous people and violence against women. Both bishops were frank about tribal infanticide having happened in the past and indicated that there is much less of it now. It seems to have been eradicated among the Munduruku, for example.

But Santin turned the tables on the question by asking, “What about the abortions performed here in civilization?” and declaring that “some hospitals are slaughterhouses.” He had a brilliant point, so good for him.

Sister Liliana addressed the subject of violence against women, which she pointed out is a global phenomenon. However, she also acknowledged that women of indigenous communities suffer from being trafficked; domestic violence, which is related to alcohol; and having their rights to study and health care denied. Women, including women religious, have been killed in the Amazon, and Sr. Liliana declared that women have “fertilized the Amazon with their sweat and blood.”

When questions were over, Ruffini made an expanded statement denying that Pope Francis had denied the divinity of Jesus Christ. In short, Pope Francis had not said what Eugenio Scalfari had said he said, and like many people, I am mystified as to why the pontiff gave more than one interview to Scalfari in the first place. Nota bene: Apparently, Pope Francis hasn’t given Scalfari an interview recently.

Beside me, Michael Voris was stormily asking veteran Vatican reporters if Scalfari pulls this stunt on other public figures in Italy, which is a very good question. They didn’t seem to know. I certainly don’t know. If you know, send us an email.

Then it was time to go back to my apartment and write the big story about Bishop Santin’s reproach to the “civilized” world. This took a lot of coordination, though, since I don’t speak Spanish or Portugese, and I wanted both bishops’ thoughts word-perfect. Fortunately for me, I have Spanish-speaking colleagues and a sympathetic Brazilian contact, and they set to work translating from footage of the presser posted online by Vatican News.

My writing was interrupted for a videotaped news spot in St. Peter’s Square, and when I returned to my apartment, I canceled my dinner plans with an old friend to finish the Santin story. Supper was a plastic tray of beef cannelloni from a heated compartment from the supermarket around the corner. Not glamorous, but I hadn’t even had lunch — not unless gelato counts as lunch.

Then I wrote up a draft of a translation of an interview Cardinal Müller gave to La Repubblica. When I finished, it was after 10 P.M., so I knocked off for the night.