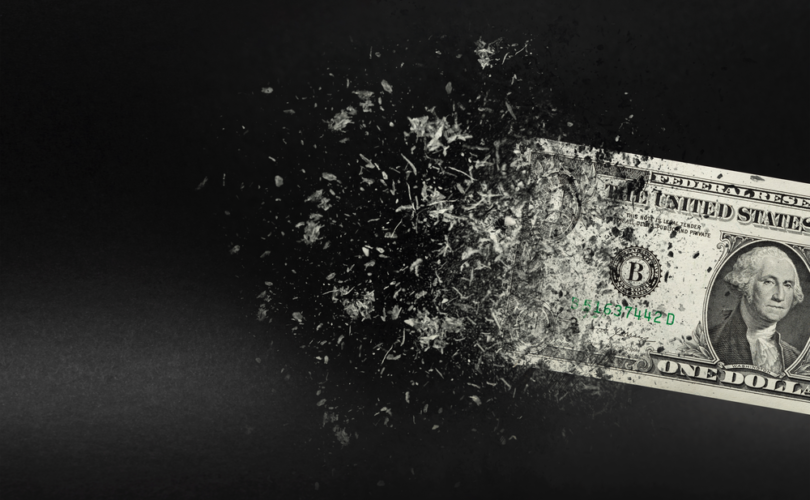 (LifeSiteNews) — With prices of essential goods and commodities skyrocketing, understanding how the government and central banks led us here through immoral deception is more important than ever.

While so-called world leaders like U.S. President Joe Biden attempt to blame inflation on the Russia-Ukraine conflict, what they are really doing is begging the public to look anywhere but at the collusion between government and banks for who to blame for the rising cost of living.

It is true that war and other international crises can disrupt supply chains and raise the price of particular goods, but if the current Eastern European war is to blame for skyrocketing inflation, then why have prices been rising for years?

In Canada, under Prime Minister Justin Trudeau, house prices have nearly doubled since he took office in 2015. But even under the so-called conservative leadership of Stephen Harper, markets like Toronto saw a massive increase in housing affordability and cost of living more generally.

While COVID has certainly exacerbated the issue, the truth really resides in the intentional recklessness of government spending and its relationship to the secret government tax known as inflation.

First, inflation is NOT the rise in prices of goods and services. That is the consequence of inflation. Inflation, in the truest sense, is exactly what it sounds like, the inflation (expansion) of the currency supply.

Economists, politicians, and bankers have been employing overly complex terms for years to hide the simple truth behind what appears to be complex monetary policy.

Terms like “quantitative easing” are used because it sounds better to the public than “printing money out of thin air.” The term “fractional reserve banking” is softer on the public’s ears than explaining to them that when they put their hard-earned money in the bank, most of it is immediately loaned out to someone else the moment it is deposited.

In other words, not only do central banks create currency out of thin air by taking on debt, but the “cash” in your bank account is not even backed by real cash.

As the late Nobel Prize-winning economist Milton Friedman said, “No major institution in the U.S. has so poor a record of performance over so long a period as the Federal Reserve, yet so high a public reputation.” I would one-up Friedman and say it is not just America’s central bank that has caused catastrophe but nearly every central bank in the world.

Whether you are in Canada or the United States, it is well known that government spending has gotten out of control, especially, but not only, during COVID. The Federal Reserve, for example, increased money printing by 26 percent at the peak of the so-called pandemic.

According to an article from the Brownstone Institute, this amounts to a massive 42 percent increase in the total supply of dollars in circulation in a mere 18-month period.

There are only two ways the government can obtain money to spend, and both come at the expense of us, the common folk. The first way is annoying, but albeit more honest: taxation. The government tells us they need money, and they raise our taxes. We pay more in tax, “giving” the government our money for it to spend instead of us.

While nobody likes taxes, the other way the government obtains money is through the sneaky tax of inflation. Instead of letting us know that we are going to have less money, the central banks increase the debt on their balance sheets, create and loan the money to the governments, and through the basic economic axiom of supply and demand, our money loses purchasing power as the government and other debtors introduce the new money into the currency supply.

In effect, while the government has not “taxed” us in the way we are familiar, it produces the same outcome. Under normal taxation, if I had $1,000, the government would take 10 percent, as an example, leaving me with $900 to spend or save.

With inflation, the government does not even have to raise taxes to tax us. The central banks just create the money, loan it as debt to the government, and it gets spent. The problem is, the more the central banks and governments do this, the more money is in circulation, and the more our purchasing power is reduced. Using the example above, we may still have the same $900, but it now only buys us $800 worth of goods.

The other nefarious aspect of inflation is that it is ubiquitous. While the government may add a specific tax to a certain commodity, like gas, inflation reduces the value of the dollar itself, which impacts every single transaction we make, because every transaction we make is done in the currency that is being inflated.

Furthermore, not only does inflation make us have to spend more money to obtain the same goods, it devalues our savings as well. As our money sits in the bank with low interest, it buys less and less as inflation continues to rise.

Inflation is the government’s perfect secret tax. Instead of being explicitly taxed, the government and the central banks create money and slowly steal the purchasing power from our money without ever even having to touch it.

So what does this mean?

It means inflation is not going to stop any time soon. Even if government spending is slashed (which is unlikely), inflation will continue as more and more of the money that has been printed over the past two years continues to be introduced into the economy.

According to economist Peter Schiff, who successfully predicted the real-estate crash of 2008, inflation “is just getting started.”

Schiff says governments that locked down the economy through COVID while printing money to give out as “stimulus” payments “was the worst possible combination of monetary policy.”

“As we ordered people to stop working, and people went home and were no longer producing goods and services, we gave them additional money to buy the stuff that nobody was producing.”

As prices rise, people will feel as though they need to spend their money today, because tomorrow it will buy them less, and this will further exacerbate the problem.

I’m not an economist and I’m not a financial adviser, nor do I have a crystal ball. But I think as people continue to lose confidence in the value of their government-minted money, a move toward tangible, hard assets is inevitable.

Putting money into things that retain value seems to be the only course of action people can take to hedge against government-induced inflation and protect their wealth. Whether the answer is gold, silver, land, oil, foreign stocks, or something else, I do not know, but with the recklessness of government spending and the insane monetary policies of central banks, I do not think the answer is going to be continuing to trust our constantly devaluing dollars.