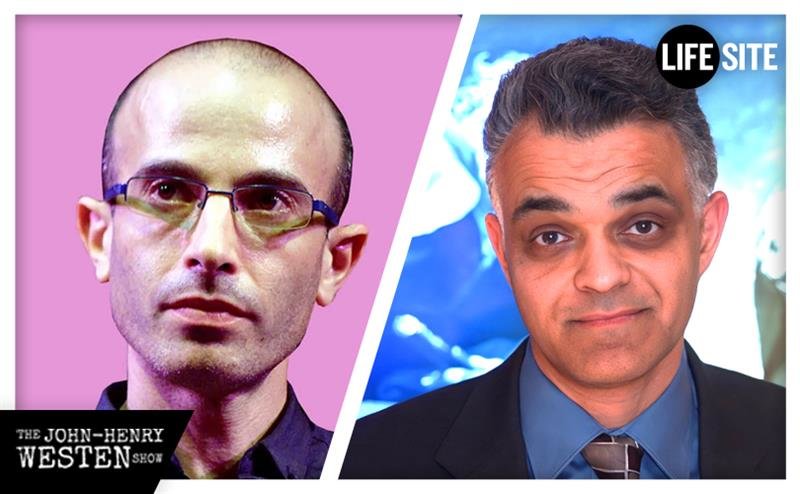 (LifeSiteNews) — In this episode of The John-Henry Westen Show, I will dive into the mind of Professor Yuval Noah Harari.

Yuval Noah Harari is a highly influential figure in modern politics, but why is he so involved? Looking at his key ideas and beliefs, we can begin to see his motivation.

A lecturer at the Department of History in the Hebrew University of Jerusalem, Harari utilizes history, philosophy, and biology in his reflections on what he believes are the most important global challenges facing the world today, and strives to focus the public conversation on these issues.

With this goal in mind, he wrote five books that describe his worldview and the things he thinks others ought to prioritize. He also co-founded Sapienship, a social impact company with projects in the fields of entertainment and education, with the man he refers to as his “husband” and original agent, Itzik Yahav. That’s right, husband. We’ll get to that in a moment. This company “advocates for global responsibility through its mission: to clarify the global conversation, to focus attention on the most important challenges, and to support the quest for solutions… and Sapienship highlights three [problems]: technological disruption, ecological collapse, and the nuclear threat.”

Harari mentions his “husband” in multiple interviews, and he admits with pride that being homosexual affects his research, which serves as a major indicator of his worldview. In this same interview, he rationalizes homosexuality on the grounds that “anything that exists is by definition natural.”

Harari argues that there is no purpose to sex, comparing human sexuality with the sexuality of a chimpanzee. He continues, claiming that “the idea that sex exists only for the purpose of procreation is complete nonsense invented by priests and rabbis.”

“In truth, our concepts of ‘natural’ and ‘unnatural’ are not taken from biology; they are taken from Christian theology,” he adds.

As we know, God created man to be superior to all other animals, but Harari reduces humanity to its base animal level, describing God as a myth, “a big man in the sky who gets angry when two men love one another.” Continuing with this language, he says that no “big man in the sky” gets angry; the only people who get angry are “all sorts of priests and rabbis.”

He fleshes out this idea of religion as mythology in his book, Sapiens, describing how humans became the dominant creature on the earth. Harari’s official website describes this first book as one that analyzes various topics, following humanity’s development across history and ranging from “We rule the world because we are the only animal that can believe in things that exist purely in our own imagination, such as gods, states, money and human rights,” to “With the help of novel technologies, within a few centuries or even decades, Sapiens will upgrade themselves into completely different beings, enjoying godlike qualities and abilities.”

For example, in chapter one, Harari claims that:

We assume that a large brain, the use of tools, superior learning abilities and complex social structures are huge advantages. It seems self-evident that these have made humankind the most powerful animal on earth. But humans enjoyed all these advantages for a full 2 million years, while remaining weak and marginal creatures.” In the next chapter, he explains his theory of war: “Having so recently been one of the underdogs of the savannah, we are full of fears and anxieties over our position, which makes us doubly cruel and dangerous. Many historical calamities, from deadly wars to ecological catastrophes, have resulted from this over-hasty jump.

Further in his book he claims that:

Fiction has enabled us not merely to imagine things, but to do so collectively. We can weave common myths such as the biblical creation story, the Dreamtime myths of Aboriginal Australians, and the nationalist myths of modern states. Such myths give Sapiens the unprecedented ability to cooperate flexibly in large numbers.

In other words, human superiority is the result of storytelling, and humanity’s myths bring about our social nature.

Picking up where Sapiens left off, Homo Deus explores “how global power might shift, as the principal force of evolution – natural selection – is replaced by intelligent design.” Harari reiterates this idea in multiple talks about technology.

“We humans should get used to the idea that we are no longer mysterious souls. We are now hackable animals,” he says.

(These clips are from Harari’s talks at the World Economic Forum, where he’s an agenda contributor as well.)

Harari published a list of errors from this book on his website, correcting them, but maintains that none of these errors changed the core arguments of the book. Most of the corrections were either statistics, dates, or other details, but some, like this one, seem to be rationalization, an attempt to save his argument in the face of criticism:

While this may have been a public relations stunt more than a serious move, in numerous other companies’ algorithms are joining management boards in more discrete ways. Official membership of the board is perhaps still restricted to humans, but what these humans choose to do is increasingly shaped by algorithms. In many cases, the humans just rubber-stamp the recommendations of the algorithms.

Having received criticism, Harari responds with a claim that his argument can still stand without this evidence he originally hoped to support it with. His example of a particular company, now no longer relevant, failed; and he turned to a general statement about “other companies,” leaving the specifics behind.

Clearly, he takes events and fits them into his narrative. His narrative continues to be very empirical and negative. According to Harari, “Homo sapiens is a post-truth species, whose power depends on creating and believing fictions.”

Harari says he believes in science and its two processes: deterministic and random. A combination of the two creates probability, he suggests, the closest thing there is to freedom, but there is no free will. He claims “free will was always a myth and not a scientific reality.”

The United States Declaration of Independence begins this way, “We hold these truths to be self-evident, that all men are created equal, that they are endowed by their Creator with certain unalienable Rights, that among these are Life, Liberty and the pursuit of Happiness.” In Sapiens, Harari gives us his own version of this famous sentence:

We hold these truths to be self-evident, that all men evolved differently, that they are born with certain mutable characteristics, and that among these are life and the pursuit of pleasure.

Harari’s argument is that since there is no Creator (he calls God the “man in the sky”), we cannot be created equal and therefore human beings cannot be endowed by the Creator with unalienable Rights.

We see Harari “translating” the Declaration of Independence into “biological” terms, an error that he seems to habitually commit. Harari claims that everything, right from “free will” to “happiness,” must pass the scientific meter, thus rubbishing philosophy (if philosophy is something more than positivism).

In short, Yuval Noah Harari is an atheistic nihilist. Relying on his perceptions of natural selection and biology to explain everything, he clearly misses the full truth of humanity, the world we live in, and reality itself. Consistent in his inconsistencies, Harari makes it easy to spot this pattern of scientificism throughout his work.