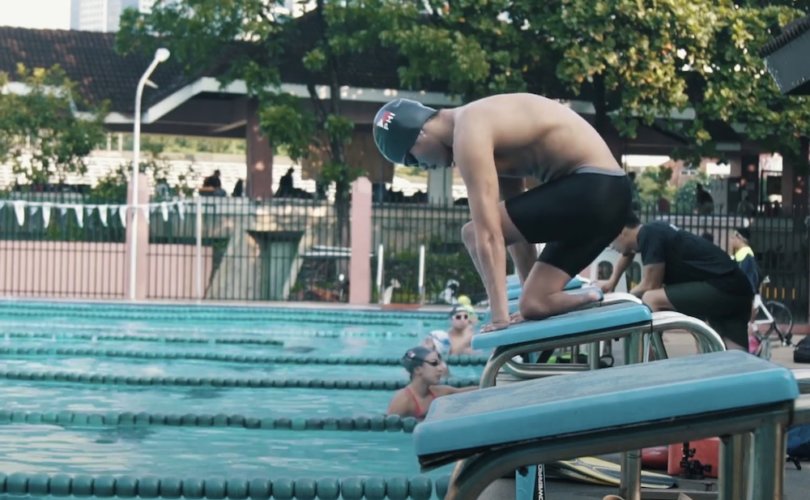 (LifeSiteNews) – If you read Filipino swimmer Ernie A. Gawilan’s profile at the website of the International Paralympic Committee, you won’t read anything about abortion. His “type of impairment” is listed as “limb deficiency,” and the “origin of impairment” is noted as “congenital.”

Gawilan began swimming in the year 2000 during his free time while working as a housekeeper in Samal, and a swim coach noticed him. Gawilan has gone on to win three gold medals and two silvers at the 2018 Asian Para Games in Indonesia, becoming the first Filipino athlete to do so.

Gawilan is competing in Tokyo this year in the 2021 Paralympics, but there is more to the famous swimmer’s story than immediately meets the eye. In a 2014 interview, Gawilan revealed that he very nearly didn’t make it out of the womb alive. Gawilan lacks legs, and his left arm failed to fully develop—but he also grew up as an orphan when his mother died of cholera when he was only five months old.

Gawilan was conceived in an affair his mother had with another man, and the little boy nearly died in the womb during a failed abortion when she tried to hide the pregnancy from her husband (who subsequently abandoned them).

“I must have been a good swimmer even in my mother’s womb, because I survived the abortion,” he told the interviewer. “I just swam.”

In the water, Gawilan says, he “feels normal.” Growing up, he was bullied for his disability and his appearance, and it was not until he discovered swimming and was noticed by a coach. He has gone on to compete in Indonesia, Malaysia, Singapore, India, Japan, New Zealand, Myanmar, South Korea, and Italy, raking in 15 international swimming medals. The abortion survivor is now considered a world-class athlete.

The stories of abortion survivors are unique because they give us answers to unanswerable questions: what would the missing millions have looked like? What might they have done? How would they have changed us? Who might they have loved, and been loved by? A single human being has a tremendous impact on those around him, and it is hard to grasp what we have lost in the carnage of abortion.

I’ve had the opportunity to speak with abortion survivors on my podcast, and their stories are incredibly powerful. There is Melissa Ohden, who found out as a teen that she had soaked in saline in the womb for days but survived. There’s Claire Culwell—author of the recent book Survivor—who survived an abortion, but lost her twin, and wonders every day when she looks in the mirror if she is staring at the face of her lost sibling. There’s Gianna Jessen, who also survived an attempt to kill her in the womb with saline, and still suffers the physical consequences.

These survivors are a living rebuke to the abortion industry, which tried and failed to kill them. Their stories are ignored because by the standards of our progressive society, they should not exist. Men like Ernie Gawilan and women like Melissa Ohden, Claire Culwell, and Gianna Jessen are supposed to be dead—but God had other plans. To know their stories is to know that day by day, we are destroying countless precious people who had the right to take their place among us. Those who champion the right to kill these people should be condemned, and should be forced to face the truth about what they are doing.

Ernie Gawilan’s life is more proof that while abortion activists champion choice, the “healthcare” they advocate is murder. We must never, ever forget that.