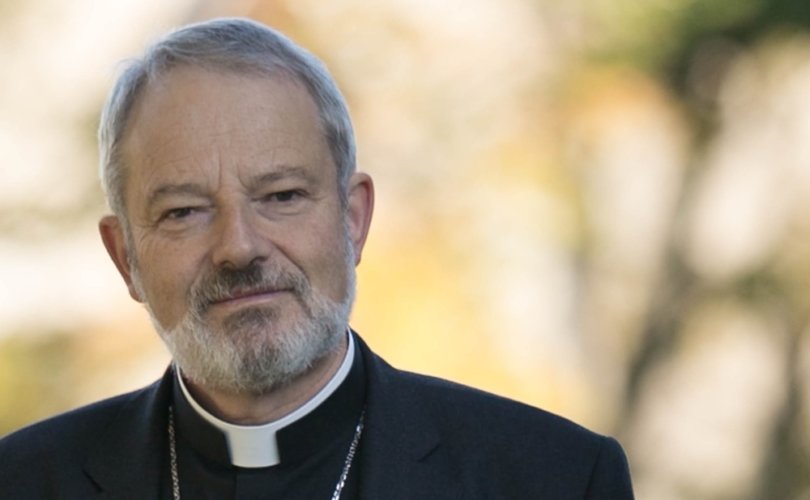 IRELAND, May 29, 2018 (LifeSiteNews) – A Catholic bishop is urging Ireland's “Yes” voters to repent and go to confession, while offering what nevertheless seems to amount to a rather feeble response to the mass apostasy of a once Catholic nation.

Kevin Doran, the Bishop of Elphin, appeared on an Irish television talk show, Today with Sean O’Rourke and delivered a mild-mannered response to the 66% of active Irish voters, most of them cultural Catholics, who voted “Yes” to bring abortion to Ireland.

“What I’d say to a Catholic who voted ‘Yes’, is this: if you voted ‘Yes’ knowing and intending that abortion would be the outcome, then you should consider coming to confession,” he said, “where you will be received with the compassion shown to any other penitent.”

“All sins are ultimately about decisions that impact on our relationship with God,” he continued.

But, when asked if sinning Catholics who had not gone to confession could receive Holy Communion, the Bishop did not answer directly. According to the Irish Times, he instead left the matter up to the erring Catholics’ consciences.

“That’s a matter for their personal conscience because I can’t see into someone’s heart or soul as they approach the altar,” he said.

The bishop added, however, that he gives Holy Communion, which Catholics revere as the Body and Blood, Soul and Divinity of the Lord Jesus Christ, to anyone who asks for it.

“In over 40 years as a priest I have never turned anybody away from Holy Communion because the presumption, as people approach the altar, is that they come in good faith,” he said.

According to Catholic teaching, no one in a serious state of sin (mortal) may approach the Eucharist without having repented his sins, confessed them to a priest, received absolution, and performed a penance, all with a firm purpose of amendment.

Ordinarily the Church allows Catholics to determine their readiness to receive the Eucharist, but the Code of Canon Law states that those who “obstinately persevering in manifest grave sin are not to be admitted to holy communion.” It adds that a “person who is conscious of grave sin is not to celebrate Mass or receive the body of the Lord without previous sacramental confession.” Canonists say this would apply in the case of pro-abortion Catholic politicians, for example.

Bishop Doran, who has a doctorate in theology from the University of St. Thomas Aquinas (the Angelicum) in Rome, said that allowing people to make up their own minds as to whether or not they should receive Holy Communion is about asking them to take “personal responsibility.”

Given that two-thirds of Irish voters opted to bring abortion–the deliberate killing of unborn human beings–to Ireland, overthrowing the Eighth Amendment’s guarantee of the right-to-life of both mothers and babies, the bishop’s response was comparatively mild. Historically the Roman Catholic Church has dealt much more robustly with such examples of public sin.

“In the past the Church has sometimes responded to the dilemma Bishop Doran identified with a specific canonical penalty,” historian Dr. Alan Fimister told LifeSiteNews.

“When a civil community as a moral unity sins against God’s law, the traditional canonical response has been to impose a General Local interdict suspending the liturgical and sacramental life of the church in that region,” he explained.

England, for example, was placed under a General Local Interdict under King John. After John seized Church land, Pope Innocent both excommunicated him and prohibited the clergy of England from conducting religious services, except for baptizing babies and hearing the confessions of the dying.

Maria Madise, the international director of the Society for the Protection of the Unborn Child, told LifeSiteNews that voting for abortion opened the door to violations of the Fifth Commandment.

“The question of access to Communion after voting for abortion cannot be reduced to an issue of individual conscience,” she said. “Our conscience must adhere to the divine law, which is written in our hearts as well as taught by the Church.”

“We cannot vote to open the door to the killing of innocent human beings, in violation of the command 'Thou shall not kill', and then present ourselves for Holy Communion,” Madise continued.

She said that Catholics had to remember that Saint Paul explicitly warned against sacrilegious reception of the Eucharist.

“We must remember the words of the Apostle,” she warned. “‘Whosoever shall eat this bread or drink the chalice of the Lord unworthily, shall be guilty of the body and the blood of the Lord. But let a man prove himself, and so let him eat of that bread, and drink of that chalice. For he that eateth and drinketh unworthily, eatest and drinketh judgment to himself, not discerning the body of the Lord’ (1 Cor 11, 27-39).”

The Archbishop Diarmuid Martin of Dublin has alluded to the failure of Catholic schools to actually inculcate the Catholic faith in students. He told The Irish Times that the schools might not be “delivering for the investment we make in faith development.”

Certainly the fact that two-thirds of those who voted ‘Yes’ in Friday’s reformation to repeal the constitutional right of an entire class of human beings to live out the span of their natural lives suggests that many Irish Catholics do not actually believe the Catholic faith. In a Twitter comment now making the rounds on international social media, a ‘Yes’ voter revealed the inner state of Ireland’s cultural Catholics when she described indignation at a priest’s homily during her son’s First Communion mass.

On May 20, Colette Willis tweeted, “Son’s first communion mass just descended into chaos when the priest decided to lecture us about abortion. After half of us walked out, other people confronted him and shut him down. If I wasn’t already cured of religion…#RepealTheEighth.”