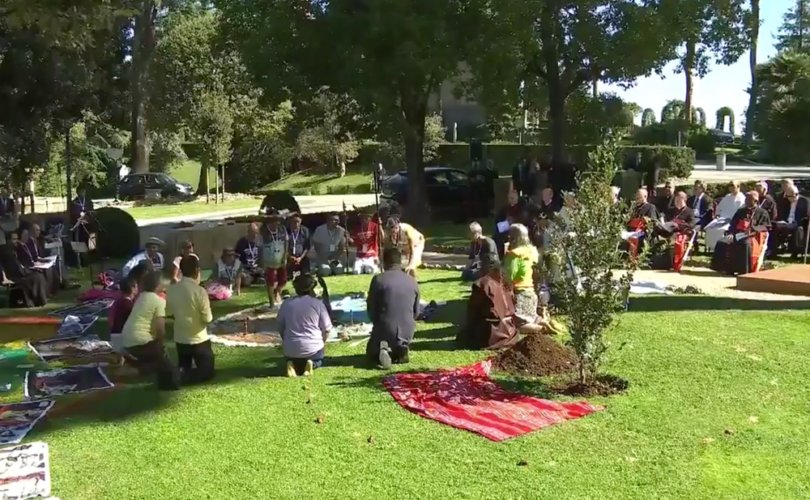 October 22, 2019 (LifeSiteNews) — The Amazon Synod is almost over. It’s probably going to be a disaster for the Church. Just how much destruction it leaves in its wake is up to God’s permissive will.

In all likelihood, the synod’s final document will rely on ambiguous language with footnotes galore. Then again, its authors may be more brazen than they have in years past. After all, who is going to stop them?

Previous Francis encyclicals and Vatican II documents will surely be cited extensively in whatever text they conjure up. The Council of Trent? Not so much.

The synod itself is ultimately a show trial whose outcome has likely already been determined. To accomplish their destruction of long-established Church teachings, participating liberal clergymen need only engage in highly skilled parliamentary maneuvering and well-choreographed interventions. Time will tell if they’ve succeeded.

Pope Francis’ sermon at the synod’s opening Mass in St. Peter’s gave Catholics a clue as to how the gathering would proceed.

In his remarks, the Holy Father spoke about how the fire of the Gospel needs to spread and not be “smothered by the ashes of fear.” He then called on bishops not to have “concern for defending the status quo.” In typical liberal fashion, Pope Francis also remarked that “the Church is always on the move” and that she mustn’t have a “spirit of timidity.” Perhaps the most egregious part of his remarks was when he seemed to characterize the teaching of the Catholic faith to pagan tribes as a form of colonialism.

That last point shouldn’t be surprising. Pope Francis looks down upon those who actively try to convert souls to the True Faith. He views such efforts as a form of aggression and “triumphalism.”

The real reason the Amazon Synod is taking place is so liberal clergy in various parts of the developed world (Germany especially) can point to the exceptions that will likely be made for married priests and female “deacons” in the Amazonian region. Liberal bishops will then introduce these “pastoral reforms” in their own countries, citing the need for the Church to stay relevant in the modern world.

These changes will result in the creation of radically distinct national churches that are so different from one another that the term “catholic” — which means “universal” — will no longer be an accurate way to describe the Roman Church. “Fractured” and “regional” would be more apt terms.

Eventually, progressives in the Vatican will seek to force their revolutionary agenda onto the remaining holdout “conservative” countries. Naturally, those who resist will be accused of schism.

Ultimately, what seems to be taking place is that a false church that promotes a man-made, humanistic religion is attempting to finally supplant the One, Holy, Catholic, and Apostolic Church.

It is therefore the duty of Catholics to seek out and cling to the few remaining clergy faithful to Christ’s teachings, wherever they may be. As a wise bishop once told me, “Watch and pray, watch and pray, 15 decades every day.”