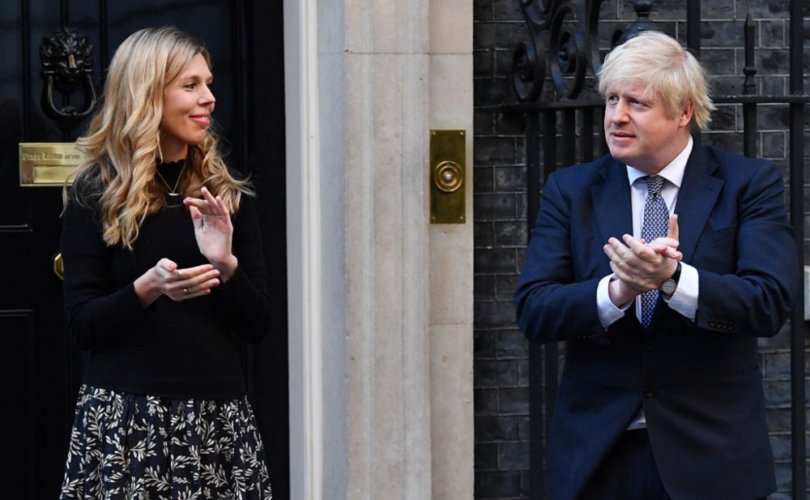 August 10, 2020 (LifeSiteNews) — Back in April, I reported on the news that the U.K.’s Conservative government was preparing to release a proposed ban on so-called sex change surgeries for minors, as well as reforms to protect single-sex spaces to ensure that males could not access female-only facilities simply be declaring themselves women. U.K. minister for women and equalities Liz Truss has been taking nonstop fire from trans activists for months now, and the Tories have been under enormous pressure from the LGBT movement to back down.

That was months ago, and the promised reforms have yet to materialize. Now the Daily Mail is reporting that there may be a strange reason for that. According to some dissatisfied Tory M.P.s, Prime Minister “Boris Johnson developed cold feet after being influenced by his fiancée Carrie Symonds.” Symonds is the live-in girlfriend Johnson took with him to 10 Downing Street. Over twenty years younger than Johnson, she is now his fiancée and currently carrying his child.

According to the Daily Mail, Johnson “had been expected to declare that the Government was abandoning moves to allow transgender people to change their birth certificates without a medical diagnosis” before “that announcement was postponed at the last minute earlier this month.” Cabinet minister Liz Truss, who the Mail says has been “fighting a ‘culture war’ within Whitehall to stop the rules being relaxed to allow biological males who identify as women to use female facilities,” has been suddenly left without prime ministerial support — although Harry Potter author J.K. Rowling has become a high-profile ally.

Downing Street is strongly denying the allegations, claiming that “Ms Symonds has not discussed this issue with the Prime Minister,” but Tory M.P.s aren’t buying it. Parliamentary allies of Liz Truss are telling the media that Johnson has “backed away from a confrontation with trans activists on the advice of Ms Symonds,” which is why the promised reforms have suddenly been delayed. The Tory plan, which involved the abandonment of proposals allowing people to simply self-identify as whichever gender they chose, was a sharp divergence from Johnson’s predecessor, Theresa May, who fully backed the trans agenda.

According to the Daily Mail:

[T]he proposals were expected to be watered down when the Government gave its official response to a public consultation on the Gender Recognition Act, which elicited more than 100,000 responses. However, the planned response to the act has been delayed. Trans rights activists within the Conservative Party say that abandoning moves to liberalise the law would be a ‘Section 28 moment’ — the law passed by Margaret Thatcher in 1988 which banned councils and schools from ‘promoting homosexuality’ — that would be ‘unpicked within years’. One senior source said: ‘Many detect the hand of Carrie in this, but for whatever reason, Boris does not appear to have an appetite for this fight at the moment. He’s got cold feet.’

The Daily Mail story is an unwelcome development for Johnson for several reasons. He scarcely needs the fact that he is marrying a Millennial (his soon-to-be third wife) who may be influencing his policy decisions hitting the news cycle — especially not now. The proposed policies pushing back against the radical agenda of the trans movement have been popular and were also a key indication that the Tories might be willing to actually enact socially conservative policies after decades of pushing social liberalism. Johnson himself was best known for sordid sex scandals that resulted in at least one of his children being aborted prior to securing 10 Downing Street. His personal life and his political life have been driven by coldblooded pragmatism and a relationship with the truth as casual as many of his trysts.

It is encouraging that Tory M.P.s are pushing back, even if thus far it has taken the form of leaks to the press. If the U.K. leads the way on protecting minor children from trans ideology, other countries are likely to follow. Somebody needs to be first. If Liz Truss and other prominent Tories are willing to take the plunge, Johnson and his latest belle need to get out of the way.

Jonathon’s new podcast, The Van Maren Show, is dedicated to telling the stories of the pro-life and pro-family movement. He’s joined in the latest episode by Dr. Frank Turek, a close personal friend of the late Mike Adams — a “pro-life and free speech warrior,” “witty,” and “satirical.” In recent obituaries, Adams is being defamed by the mainstream media for his conservative views and satirical posts. Turek sets the record straight and pays tribute to Mike’s contributions to the conservative movement. You can subscribe here and listen to the episode below: